In honor of Comic-Con weekend, I dug out these three snapshots from my found photo collection featuring comic books! 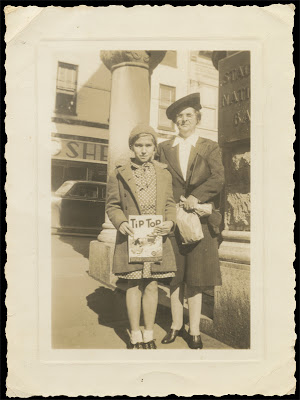 Mother and daughter stand outside of their hometown bank proudly posing with issue #68 of Tip Top Comics. Sheesh, I know times were hard but a bank loan for a ten cent comic is crazy. They should have at least bought Action #1 for a better return on their money. 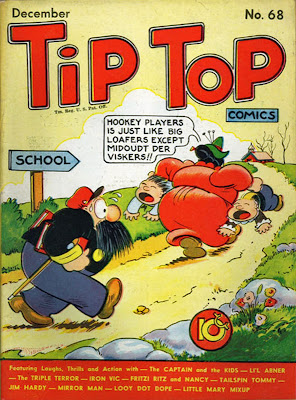 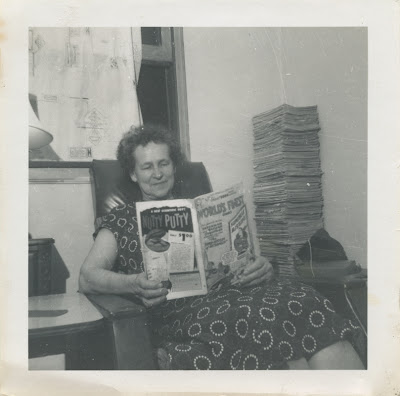 Now this gal is a serious comic book reader. Besides reading World's Finest Comics #84, she has a comic stack that's taller than she is. I wonder if she ordered the Nutty Putty for a buck? 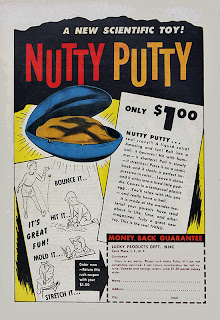 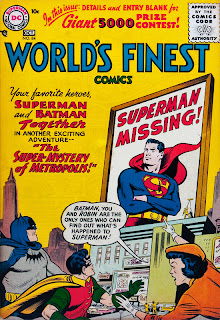 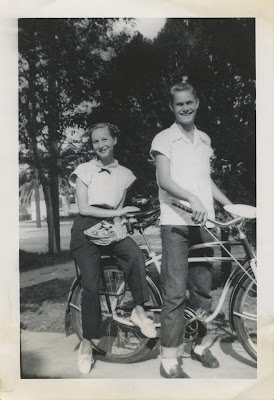 Now this snap is classic cool! Two kids on a bicycle with a stack of comic books. Someone jotted down a note on the back - "Ken had started to take Dot home on his bike when I got this one, (funny books & all) (ha) Aug. 47." I hope Ken married Dot because any comic book lovin' girlfriend is a keeper! 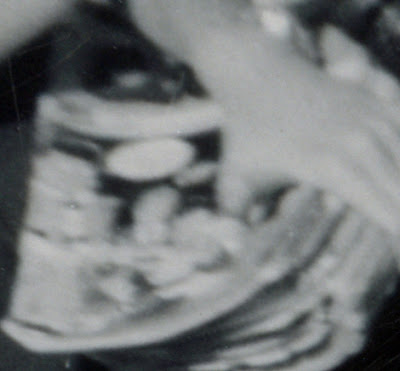 Any clue as to the comic on top of the Dot's stack of funny books? I tried to figure it out but had no luck. It looks like a humor or funny animal book. 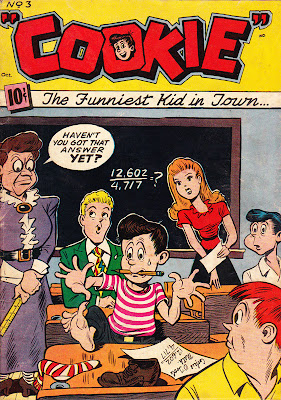 ---News Flash--- Neato Reader and eagle eye Glen Mulally solved the mystery of Dot's comic book. The cover on top of the stack is Cookie #3. Thanks Glen for the super sleuth detective work!

I forgot the link to the cover!

I've updated the post. Thanks Glen, now I can sleep better knowing this case is solved!

Mr. Mayor...may I recommend you read THE 10-CENT PLAGUE by David Hadju? It tells the story of the anti-comic book hysteria of the 1940's and 50's.

Paul - That book is a fascinating read and I second your recommendation!

Neat post, Mayor! You could do a similar one on "Comics on TV" --I'm thinking specifically LEAVE IT TO BEAVER as the Beav reads a lot of comics. I know in one episode he's reading Adventure Comics #240 "The Super Teacher From Krypton" and in another,he's reading a copy of (fake title?) "Atomic Archie."

Thanks Richie! Yeah that is a great idea! I always have fun looking at props like comic books, toys and cereal boxes in old TV shows.