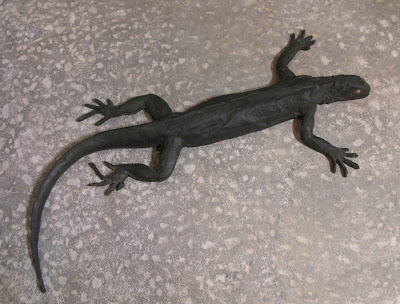 I have an old childhood friend who is a rubber lizard. This 25" solid rubber toy has lived with me since I was ten years old. He has quite the personality for a rubber lizard and sometimes has a mischievous side. We'll explore that personality trait later, but first I'm curious to learn more about my rubber pal and hopefully someone reading this will recognize him. 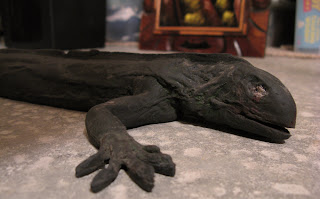 Apparently ol' rubber neck had a life before coming to live with me, because he's marked 1958. I'm a child of the 1970s and 80s, so he was was kickin' around a good 20 years before I got him. He was gifted to me by a friend of the family and if I remember correctly, he was found in the basement of an abandoned house. 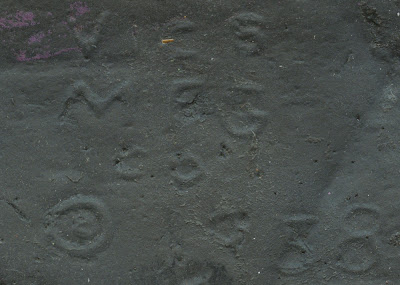 Here's the mark on his belly. I'm not sure what manufacturing company VCS stands for. (I'm sure it's not Video Computer System.) I've done a few Google searches but have found nothing. At one point he was painted green, but most of his color has worn off through the ages. His skin texture is really detailed and it makes me wonder if they actually made the mold from a real iguana body.

Remember that mischievous side I mentioned earlier? I've always had to be careful where I put this rubber monstrosity. It sounds kind of like a b-movie, but anything plastic will melt at his touch.

I found this out the hard way! After a few weeks in my toy box, I noticed he had a collection of action figures, cereal prizes and various plastic toys stuck all over his body. Each toy had a sticky residue and bad melt marks. Impossible to play with and so they were thrown out. (Later, another monster would destroy most of the contents in my toy box. I blogged about this toy back in '06) The bad rubber lizard was banished from the toy box and lived the rest of my childhood under my bed. Periodically I would check on him and without fail he usually had something stuck to his body. He melted the cover of my 7th grade year book, decimated a couple of Trapper Keepers and eventually disfigured my tape recorder. All this destruction gave my 13 year old brain an idea! I gathered up two action figures, some red paint, the rubber lizard and my Kodak EKTRA 200 and snapped this photo back in 1983. 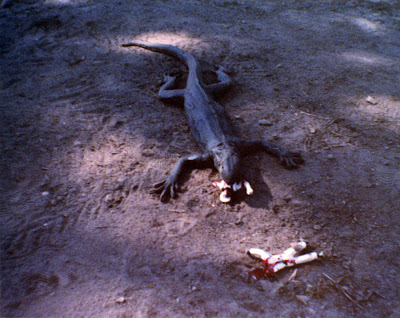 Oh the humanities! I think I used a whole bottle of Testors red model paint on those poor action figures. It's truly amazing that I saved my plastic eating rubber lizard, but it's more amazing that I saved the bodies of his two victims. I few years ago I found them in a junk box. 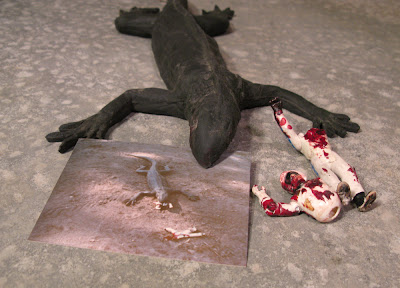 Wow, the gang is back together again! 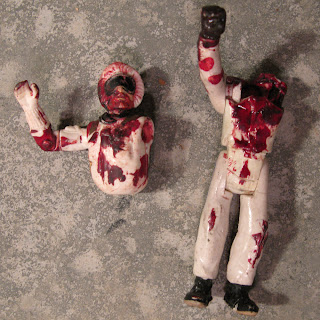 Here's a close-up of the rubber lizard's two victims. The action figure on the right, the one missing his arm and head is/was a Daredevil Skydiver from the Fisher Price Adventure People line. The half of a figure on the left is/was Snow Job from 3 3/4" G.I. Joe A Real American Hero line. 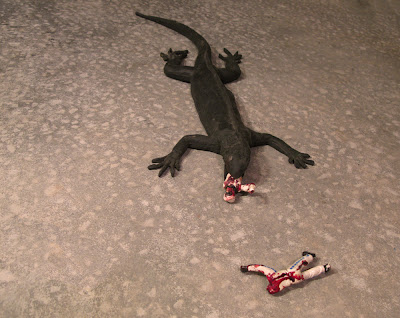 Almost 30 years have passed since I snapped that the original photo. Here's a recreation taken in my basement. Too bad I didn't have any Testors red!

Well, that about does it for this slither down memory lane. Oh wait...the lizard want's to say something. 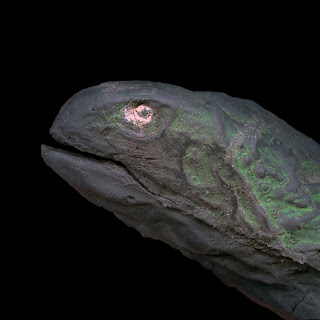 "Pleaze senD plaStic acTion figs to Me!! Me hungary"
Posted by Mayor Todd Franklin at 12:33 PM

Email ThisBlogThis!Share to TwitterShare to FacebookShare to Pinterest
Labels: 1950's, 1980's, Memories from the Mayor, Toys

You are a master of reenactments NC! I think those markings on the lizard have a deeper meaning, kind of like the markings the Prometheus found. I'd be careful the next time you head downstairs.

You're a lucky man to still have this old friend. Some things are just too good to give up. Or maybe he just wouldn't LET you get rid of him? I hope someone out there can shed some light on his origins.

Did your parents ever make you see the school psychologist?

I had the same lizard. Bought him in the 70's at the magic shop on Main Street in Disney World Orlando. I called him "Iggy". I loved him for years, but foolishly gave him away. Now I believe I've found the same one on a couple magic prop sites like www.nightmarefactory.com.
Based on what you're saying, it sounds like the mold for this toy is even older. I read somewhere that it was cast from a real iguana. My guess is a dead one.