HMM... SHOULD I PLAY TRON ON ATARI OR INTELLIVISION? 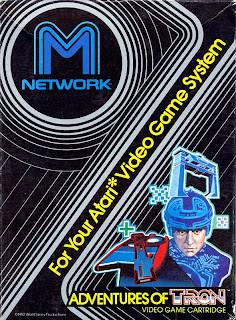 I found this M Network (the Intellivision brand for Atari) Adventures of Tron in my Christmas stocking back in ‘83. I enjoyed the game, but I wasn’t lucky enough to get the coveted M Network Tron joystick. Apparently it was a giveaway item if you purchased Tron Deadly Discs and the Adventures of Tron. When I was actively collecting Tron stuff I never ran across one of these joysticks. Now they pop up on ebay from time to time. Here’s one that was sold last week on ebay for about thirty bucks. 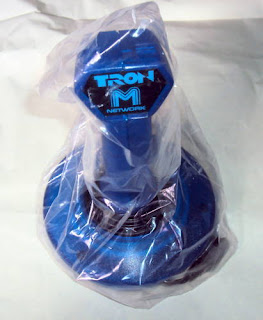 As Atari fans, we always thought of Intellivision as the enemy, but we eventually joined the darkside once the Mattel video game system started to fold. I think we picked up ours at a Kay Bee Toy store on the cheap.

I really like the artwork on the Tron Deadly Discs box. 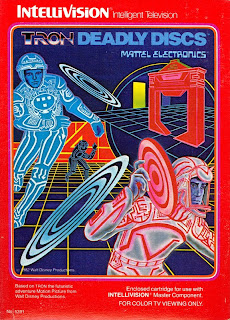 Is it me or does it look like the MCP is getting ready to eat Tron on the Tron Maze-A-Tron? 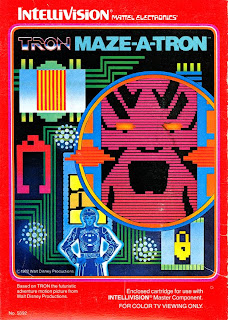 I didn't find any good video examples of Maze-A-Tron, so instead how 'bout two Intellivision catalog pages featuring the Tron games. Hey, who is that long haired blonde guy running around? I didn't know Sam Jones a.k.a. Flash Gordon (he'll save every one of us) got zapped into the world of Tron. 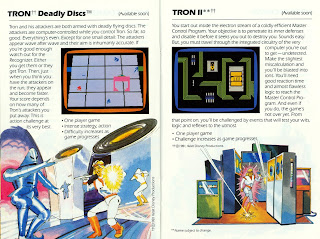 Intellivision also put out Tron Solar Sailer for their Intellivoice module. Sorry, I don't own this one but you can watch a video demo here.
Posted by Mayor Todd Franklin at 12:03 AM

Having both as a child, I whole-heartedly vote for the Intelevision version. Was one of my favourite video games :)

Intellivision had a rep for superior sports and strategy games, but weaker arcade-style games compared to the Atari 2600...but Tron Deadly Discs is a rare exception. Intellivision's larger control array (12 touch pads, 2 fire buttons, and directional disc) give it the definite advantage here (you can move in any direction you like while firing your energy disc in 6 directions, or use it as a shield to block enemy projectiles, also in 6 positions).

That said, the M-network Tron stick is very cool...