I just knew I would find a weeks worth of scary monster movies listed inside this movie schedule with the grinning Jack O’lantern on the front cover. Since I purchased this at a postcard collectors show I had to wait until the end of the show before I opened it. As I flipped through postcards, I wondered all day what played on the last week of October in 1961? 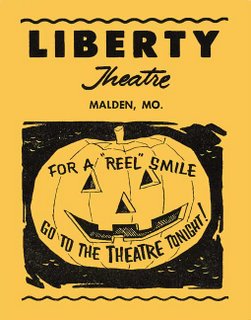 Finally after the show, I sat in the car going through some of the treasures I had found until I came to the schedule. I slid it out of the plastic sleeve and opened it up to see the romantic movies Goodbye Again and Come September listed. Thru the days of Oct. 22 to the 28, they only played lovey-dovey movies. Instead of Boris or Bela we got Rock Hudson and Bobby Darin! Ok fine, I turned the page thinking, at least there would be a creepy double feature during Halloween!

Sure enough, there wasn’t. On Oct. 29 thru Nov. 1, Walt Disney’s The Absent-Minded Professor was playing. The Liberty Theatre sure missed the boat back in 1961. They made a snazzy front Halloween cover on their schedule but instead of showing movies like Reptilicus or The Curse of the Werewolf they gave the town of Malden a week of fluffy fluff! 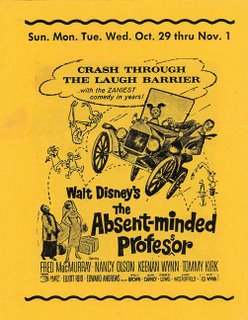 Posted by Mayor Todd Franklin at 10:06 AM