I checked out a local second hand/thrift store today that I haunt through the year looking for old stuff on the cheap. They put out a bunch of Halloween stuff every October which is mostly new things, but once in awhile I’ll score on something old and cool. Today I found a bag full of 1980's Halloween trick or treat give-aways (Hey Kirk cheap skeletons!) for two dollars, a Doritos trick or treat bag from 1998 for forty cents and the best thing is an old Frankenstein head for a buck! 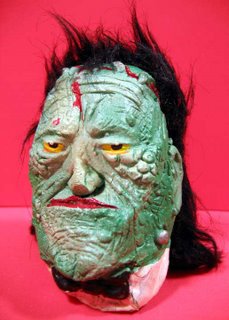 I’ve never seen one before and my guess it’s from the 1960's. At first I thought it was one of those shrunken heads, but it’s hollow and made of rubber. It looks like a mini-rubber mask without eye holes. He even looks kind of dapper with his white collar and black bow tie. Anyone have any ideas what he might be? It reminds me of a Captain Action mask just twice the size. 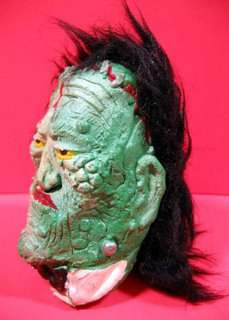 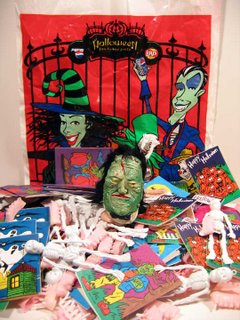 Anyway, I thought it was worth a bonus post for today!

Posted by Mayor Todd Franklin at 12:02 AM

Aw man, this post contains a "spoiler" in regards to the Skeleton Countdown. Thanks a lot! :)