Did you know back in 1953 that October was Motorola Fun Month? Well, according to this old funny paper ad printed on Oct. 18, 1953 it sure was. While Mom and Dad were spending a couple of months’ wages on a 21" tube console with the Double-Power Picture, junior could pick out his very one comic costume, mask and comic book. Wow! Now that was a swell deal! 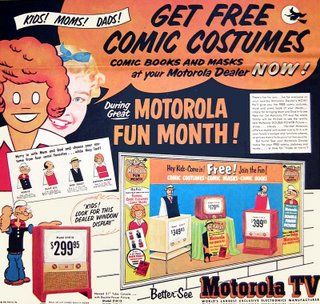 CLICK FOR A CLOSER LOOK
This next ad from October 23, 1949 stars Betty Blu-White, the ad mascot for Blu White Flakes, as she saves a Mom from a possible Halloween disaster.

Posted by Mayor Todd Franklin at 9:47 AM

Thanks for all the swell fun Todd - it's been great checking out your collection.

I love the Blu White ad! Between the split personality mom and the disturbing vision of pixies in the washing machine that poor little blonde fellow is looking at some good long couch time in the future.

We knew she's been around a long time, but this is certainly an interesting pit stop between LIFE WITH ELIZABETH and HOT IN CLEVELAND
(or that she sold a laundry product long before Spray 'n Wash).