It was a mix of snow and rain at the Wal-Mart store number 18 in the small town of Eldon, Missouri. As Mom was doing her shopping I was checking out the toy aisle making a mental list of toys that I wanted for Christmas. 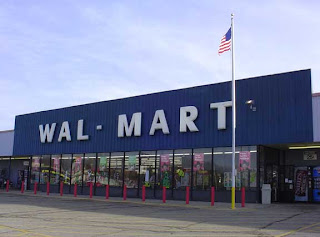 WAL-MART #18 2006
As I walked down the aisle I slammed on the breaks of my Chuck Taylor’s as I saw what would be the perfect gift for this 8 year old kid. I stood there in awe looking up at a large cardboard box that contained the most “ultimate power in the universe”, the Death Star! 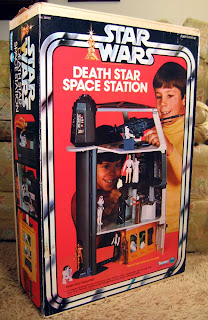 One problem I noticed on that white shelf in Wal-Mart was that there was only one Death Star playset. IT WAS THE LAST ONE! Oh man, I had to find Mom and I had to find her fast. I literally ran thru the aisles looking for her. Cereal aisle, nope. Electronics aisle, nope. Magazine aisle, nope. Christmas aisle, nope. “Where in the heck could she be?”, I wondered. Like a light bulb breaking above my head I realized that she was probably in the one dreaded aisle that I hated going in, the Women’s Undergarment aisle.

Ok, fine, I would just have to be brave, ‘cause this was a matter of life and death. (Death Star that is) I ran thru that disgusting frilly aisle with hopes of finding her fast and there she was, with a handful of Legg’s eggs. Talking as fast as I could I told her about the Death Star and that it was the only one on the self and that I just had to have it for Christmas. To my dismay she acted like it was no big deal. NO BIG DEAL! Then she told me to go wait in the car, so she could finish her shopping.

With my head down, I was a dejected little boy as I shuffled to the car. I waited for an eternity for Mom to get done. I happened to look back and saw Mom pushing the shopping cart and sure enough I thought I saw what might be the box of the Death Star! She opened the back of the station wagon and told me to keep my head face front and no peaking. Right then I had an idea that I wasn’t going to be disappointed on Christmas.

Let’s fast forward to Christmas eve where our family was sitting around a new plastic tree and I was eyeing a big wrapped up box with my name on it. Even though we were spending our first Christmas in a new house we still stuck to tradition and opened one present on Christmas eve. Since I’m the youngest I got to open mine first. (If you look in the Guinness World Records, I’m probably listed in there as the fastest kid ever to rip off wrapping paper!) Sure enough it was the Death Star playset, and even at age 8, I thought my life was already complete!
Instead of boring you with more memory stuff about all the exciting adventures I had with my new Death Star, I'll just show you some photos I took of my Death Star playset. These are from the other day at my parents house, the same house that was once new in 1978. Parts of this Death Star are from my original playset and thru the years I was able to pick up a box and some of the missing pieces that I had lost. 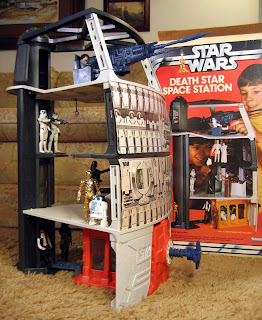 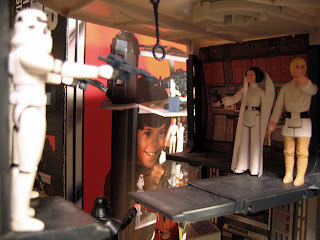 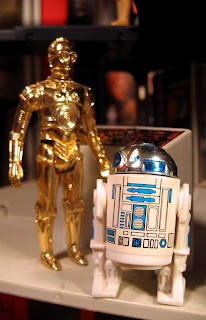 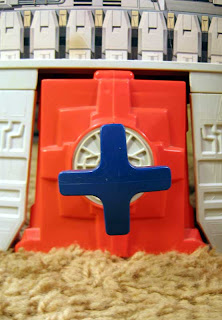 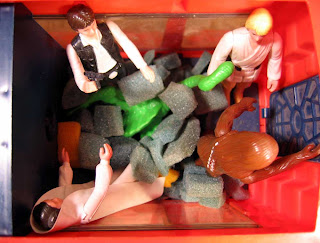 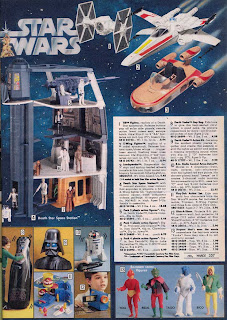 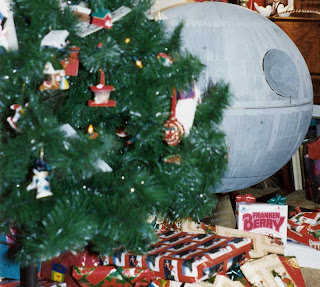 Almost 20 years later I would find another Death Star under the tree! This photo from the mid-90's, is just a tease for an upcoming post sometime in the near future. Now I have you wondering!!!
Posted by Mayor Todd Franklin at 3:59 PM

Epic tale NC! You mean you didn't hang out in the pantyhose aisle back then? That must have started later. Can't wait for the Franken Berry story! You're such a tease!!

Great post Todd! How I love those old Star Wars box designs. They're boiled down to the essentials.

I remember having a lot of trouble figuring out just what part of the Death Star the toy was supposed to be. (There was no control room under the drop off where Luke and Leia roped across!)

I also see that yours has blue foam in the compactor. Mine has blue and yellow. Neah, neah, neah.
Though my foam crumbles to the touch.

Mike - You're a real hoot! For some reason I feel like you're playing Hogan and I'm playing Klink! Hogaaaan!!

Kirk - You're right about those boxes. Every kid imagined themselves playing with the toy just like those lucky kids on the box and in the commercials!

Didn't you have the large R2-D2 that had the secret Death Star plans inside of him?

Oh and you only get one neah because if you look closely you can see two yellow pieces of trash. My trash is turning into dust too!

Oh Todd, once again I read your posts, look at the pictures and feel a sudden pang of nostalgia.

Man, I wanted that Death Star.