E.T.: THE EXTRA-TERRESTRIAL: THE HALLOWEEN SCENE

Back in June, I blogged about the 30th Anniversary of E.T. and today we take a simple look at one of my favorite scenes from the film, the Halloween scene.

I always love seeing Polaroid cameras show up in movies and I often wonder how the actual Polaroid turned out. In the beginning of the scene we see Mary (Dee Wallace Stone) using a Polaroid camera (Is that a Sun 660?) to capture the moment of her kids on Halloween night. For fun, I've created a fake Polaroid of what Mary's instant photo might have looked like. 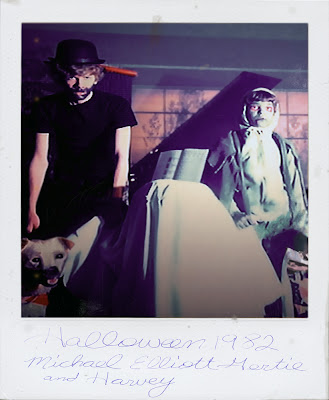 Once the kids leave the house, we see a horde of trick or treaters and costumed people walking the suburban streets. 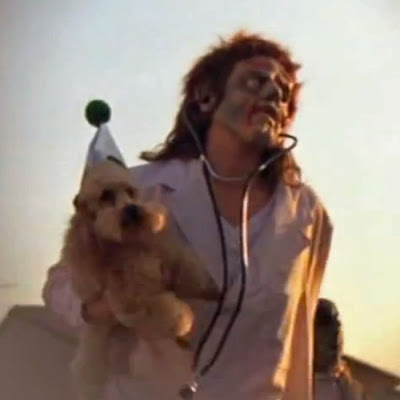 The zombie doctor holding the poodle was played by Debra Winger! 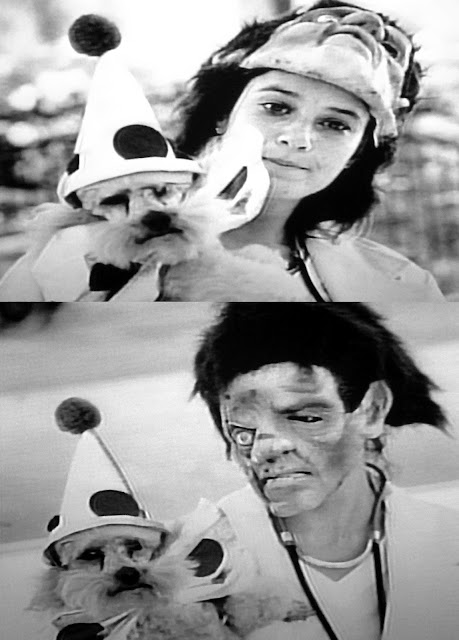 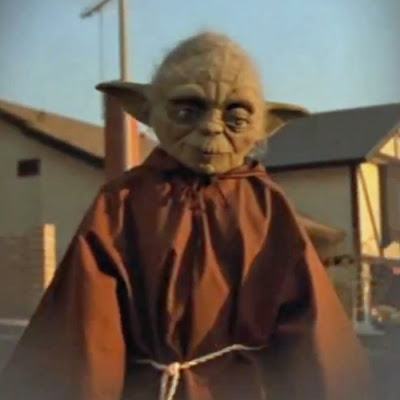 I remember when the theater audience laughed out loud when E.T. notices Yoda. Spielberg added the Yoda kid as a fun joke directed at his buddy George Lucas. It was also a fun joke for all of us Star Wars kids! 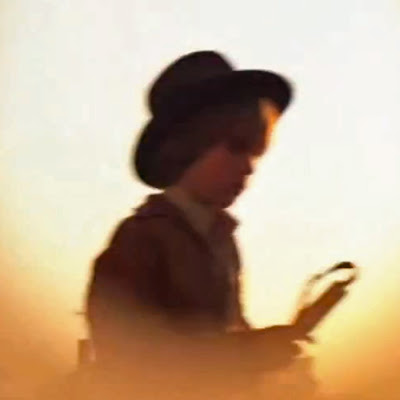 Blink and you'll miss him, but there's a kid dressed up like Indiana Jones! 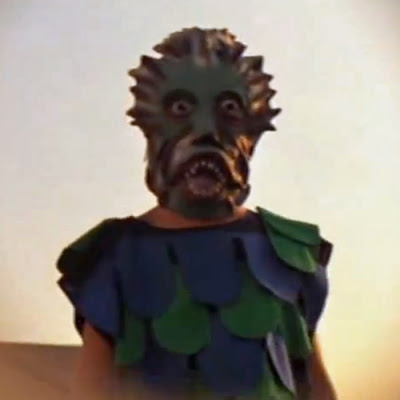 I would love to see the costume photos for all the Halloween extras! 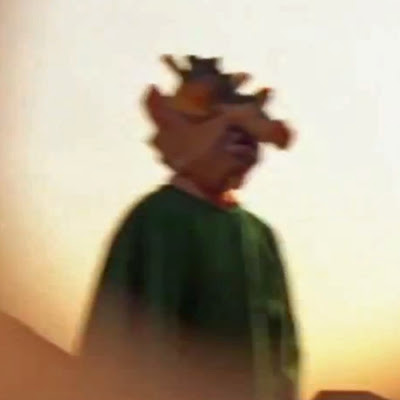 Besides the Don Post Yoda mask, does anyone know if these were studio made masks or actual store bought masks? 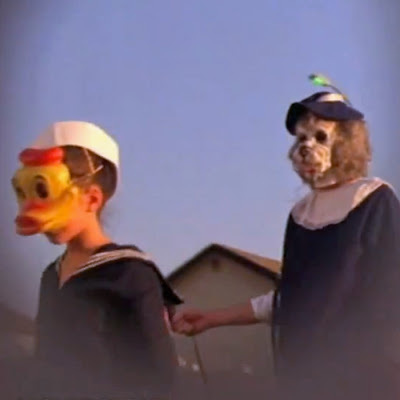 Now this is truly frightening! 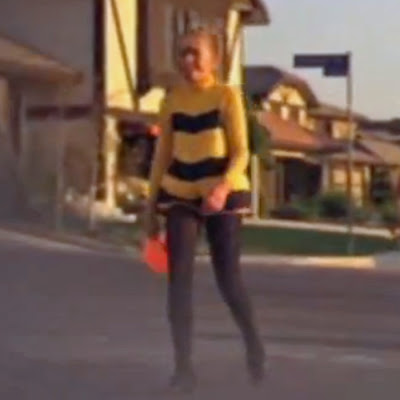 Look! It's the bumblebee girl from Blind Melon's No Rain! 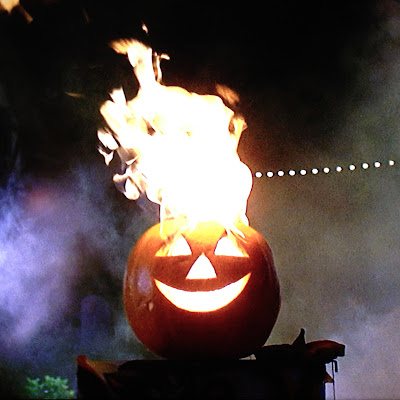 This very cool flaming Jack O'Lantern is from the deleted scene when Mary picks up Michael and Gertie on Halloween night. 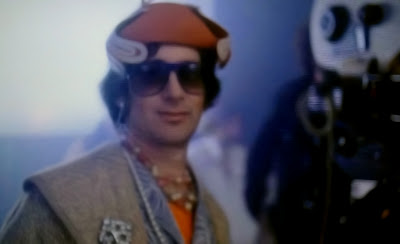 During filming on Halloween day, Spielberg showed up in costume dressed as an old lady. He even threw an old fashioned Halloween party for the kids, complete with bobbing for apples!

I recently picked up this E.T. Presto Magix. How 'bout that? This set is dedicated to the Halloween scene. 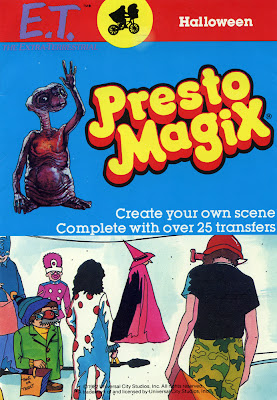 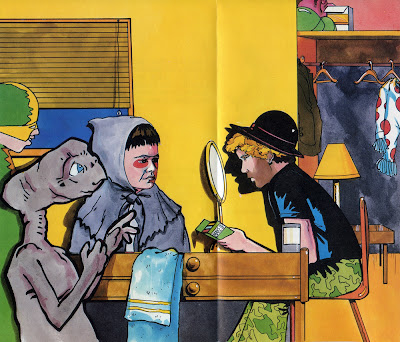 Um...who is the kid in the yellow mask behind E.T.? 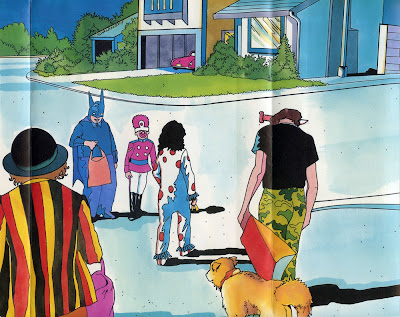 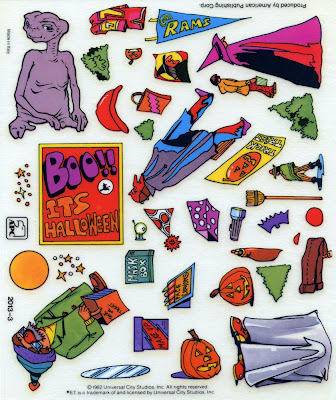 You can find the deleted Halloween scene and some footage of Old Lady Spielberg at the Halloween party on the E.T. Blu-ray extras.

After seeing it as many times as I have, I'm surprised I've never noticed the Indy costume. Thanks for pointing that out!

What makes the Yoda costume even better is the bit of Yoda's Theme that John Williams threw in there as he walks by.

Fantastic post! So much that I never noticed before.

Mike - I wish it was real, but I guess it will be the closest we'll get. Thanks!

Stephen - Yeah, the Yoda theme really makes that scene. Now if only we could have had the Indy theme, maybe we would have noticed the Indy kid!

Kirk - Thanks! I was hoping to find the trick or treat bags that the kids were using, but I wasn't successful. Elliott uses a Casper bag and Michael has a Unicorn bag.

The Polaroid is awesome! However, there is a scene where you can clearly see a wall calendar in the kitchen (I thinks it's when Mary comes in with the groceries.) It says "October" but you can tell by the way the dates fall that the story is happening in October of 1981, not 1982!