MY INTRO INTO THE ADVENTURES OF INDIANA JONES

At age ten I was a Hollywood insider, or at leat that's what I thought. I felt special being in the big-time know because of a simple brochure on Raiders of the Lost Ark. Sometime in May of ‘81 this cool brochure showed up in the mail to let me know about a new adventure movie. I was the only kid on the block who got this brochure. (I was also the only kid on the block who was a member of the Star Wars Fan Club and that's why I got the brochure) 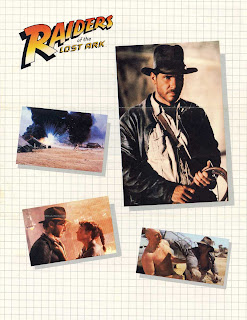 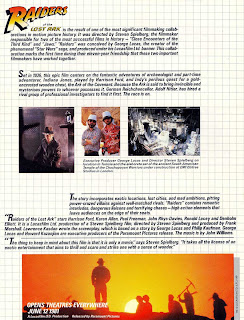 I had read small snippets of a new movie being made by my idols Lucas and Spielberg about finding Noah’s lost Ark. (I had no clue at the time what the Ark of the Covenant was) So, I was already excited that a team-up of these film titans was going to take place. It wasn’t until I saw this brochure that the WOW factor hit me like a ton of bricks and it was a big bummer that I had to wait until June.

It was a slow couple of weeks, but my chance finally showed up in the big metropolis of Columbia, Missouri at the Biscayne III Theatre. The Biscayne III was located in the Biscayne Shopping Mall and was originally part of the Jerry Lewis chain of theaters. (I must have a thing for seeing my my favorite movies in one of Jerry’s theaters)

Luck would have it that I was spending a couple of weeks with my grandfather and Lucile (step grandmother) who lived in Columbia. My grandfather wasn’t to keen about seeing movies, but Lucille was more than happy to entertain me and take me to a matinee showing of Raiders. Her speed of movie was more on the romantic side of things, so she bought a Raiders ticket for me and some romance movie ticket for herself. This didn’t bother me one bit as I was an old pro at seeing movies by myself. I saw Flash Gordon by myself just the year before.

After buying my popcorn and an orange soda I made my way down to the fifth or sixth row and planted myself, ready for an amazing adventure promised in the brochure. The brochure didn’t lie as this remains the second-best movie experience I’ve ever had. The movie was better than any amusement ride I had ever been on and after seeing Star Wars and Empire I was once again hooked on another Lucasfilm franchise. You know the famous movie tag-line “on the edge of your seat,” well this was completely true for myself and everyone else in that theater. I remember the lady next to me screamed during the part when the snake slithered out of the mummy’s mouth. I loved every minute of it!

Afterwards, I met up with Lucille in the lobby and I have no clue how her movie was, as I wouldn’t shut-up about seeing my movie. For sale at the concession stand was a nifty collector’s album all about the movie, which Lucille bought for me. Along with the brochure I still have my collector’s album always reminding me of the first time I was introduced to Indiana Jones and the fun that I had while visiting my grandfather and Lucille. 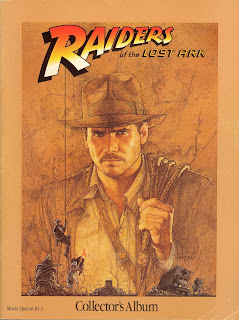 Yeah we went to a preview showing. When they got through that first action sequence I was hooked.

Todd, thanks so much for printing that flyer from the Star Wars fan club. I was just lamenting to my wife about how that was accidentally thrown out with all the research material I had on the, then new, space shuttle which I'd prepared for a science fair. (Boy, don't I sound like a geek) I brought the flyer to show friends in an effort to enthusiate them about the movie. They all remained skeptical, and I had to drag them to see it when it came out. Can you imagine that?

Anyway, the flyer, and my space shuttle material was in a paper shopping bag being stored in the school office, and someone threw the whole thing out.

This is the first time I've laid eyes on that flyer in all those years, and I'm stunned to see that I still recalled all the still images correctly.

Hello! I've been admiring your pictures on Flickr for a while now, and your notice about "Indy Week" convinced me to check out your blog - great stuff here! I saw the first "Star Wars" when I was 7 years old, and "Raiders" when I was 10, so the things you write are coming through loud and clear to me. I've added you to my RSS reader.

Another entertaining tale from NC's childhood. Can't get enough of 'em!

I'll add my voice to the "me too's" on this post. I was also the only kid I knew who got the Raiders SWFC mailer and felt very ahead of the loop. I had to pick up my Collector's album on the newstand, but have treasured it since.
Raider's came a close second to Star Wars as my favourite movie of all time, so I'm looking forward to the rest of your posts!

My mom took me to see this the week it opened too, at the long gone Mark Twain theatre in St Louis. I was so excited to see it but we got there late and as we walked into the dark theatre I was immediately annoyed that the movie had already started, in fact the opening scene was practically over and as we're trying to find seats and the giant boulder is rolling down to crush Indy, people are yelling at us to "sit down!" and "get out of the way" and "get to the movie on time!" etc... I was bummed through the whole movie because I HATE not seeing a movie from the very beginning, I just feel like I've missed everything. But the movie was of course totally brilliant even without a beginning, and I got to see it two more times the following week (from the beginning!), in fact that entire summer it played we probably saw it a dozen times total, because remember back in those days a movie actually hung around longer than two weeks. I also remember it then playing at the dollar show for another few months after it's main release, and well into the fall where we saw it possibly another half dozen times. In those days it was nice living within a bike ride's distance to a dollar show.

And as a capper, I basically repeated my summer vacation spent in a movie theatre exactly one year later when Poltergeist was released. Saw that one half a million times too.

Dan - They really know how to hook us in!

John - Glad you enjoyed seeing it again. I'm sure you were like me and studied that flyer for hours on end just wondering what Raiders would be like.

Jeff - Hi and thanks for checking my blog out. Enjoy Indy week!

Mike - I'm sure there will be many more.

Glen - Yeah, us Fan Club members were always in the know!

Steve - Oh man that is tough. We were always at the mercy of our parents. Same thing happened to me with Star Wars when I went with a friend and his dad. At least for me it was the fourth time.