Did you know that Vlad staged a very important 48 hour telethon a few years ago? We didn't either but we have Part 1 to show you and we'll be posting the other parts throughout the week. Oh and don't worry we don't have all 48 hours just some clips and highlights. 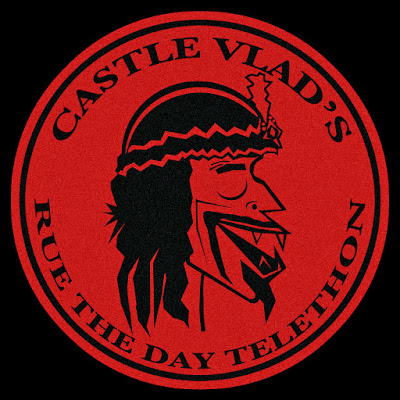 The telethon’s goals were to help fight against monster prejudice and fund Vlad’s ongoing battle against infidels. Due to a major mix-up at KRYP-TV, the telethon only aired on a few local monster and ghost stations. Unfortunately the show was not broadcasted to a worldwide audience. Of course the station manager didn’t tell Vlad the horrible news until after the 48 hour telethon was over. Remarkably, Vlad did receive some caller donations. He received two shekels, a monkey’s paw, a cursed statue and one demon dog.  The only real monies raised was a $1.98 in change which Vlad stole off of the corpse of the television station manager soon after he poured boiling oil over his head.

Check back tomorrow for Part 2!