GETTING OVER THE SICKY ICKY FLU 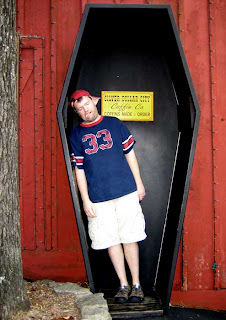 Sorry for the lack of posts this month, but I’ve been feeling kind of . . . kind of on the dead side of things. Yes, that fantastic sick bug known as the flu found me and it really shut me down. Not to fear I’ve finally returned to the land of the living and I’m looking forward to getting back into the swing of things.

Whenever I come down with the flu or a cold, I sometimes think back to those miserable sick days from when I was a kid. An early memory was from when I was four years old and I had a bad case of tonsillitis. Oh man, was I ever sick. My temperature was so high, you could’ve fried an egg on my forehead and my nose was clogged tight making it almost impossible to breathe.

My mom set up a hot steam vaporizer to help open my sinuses so I could get some sleep. This big jar full of water and Vicks looked like something a b-movie mad scientist would’ve used. It was a good device and it was my lifeline that helped me breath and sleep. The bad thing was that I shared a small room with my big brother who was only eight at the time and this bubbling smelly contraption kept him awake. What would any smart older brother do to get some peace and quiet? Naturally he would unplug the silly thing and that’s just what he did. Without my Aladdin’s lamp sending out magical vapors my sinuses clogged back up and my temperature rose. Had I known what a coma was I probably would’ve thought I had slipped into one.

Thanks to the high temp I was hallucinating and I still remember the terrible and weird dream that I had. A bunch of dumbbell weights were falling from the sky crashing down on me until I was at the bottom of a heavy pile. Finally, the dumbbells quit falling and I had survived from being crushed. I could see up thru the pile of bronze colored dumbbells and slowly floating downward was a bright yellow feather. It gently landed on top of the dumbbell pile and just like in a cartoon the pile collapsed crushing me. Of course I woke up screaming for mom and when she came to my rescue she found the vaporizer unplugged. Needless to say there were two sick boys in that room that night. One was suffering from tonsillitis and the other one from scolding-in-trouble-itis! 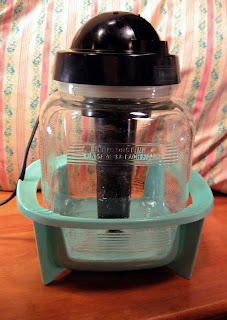 I was amazed that my mom still had the old vaporizer, hopefully I’ll never have to use it again.

This second photo is of a Kaz Inhalant bottle I picked up at a flea market. 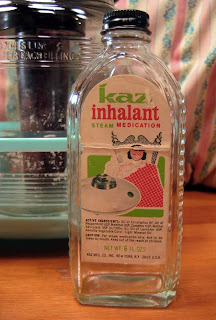 Welcome back! Glad you're feeling better.

Crazy dream. You sure that was Vicks your mom slipped in there? :)

Weird. I remember when I was a kid and I was running a really high fever once, I also had a crazy dream of being crushed under tremendous weight...except in my dream it was a giant 8-Ball (about 50 stories high) which was slowly rolling over me.

Totally neatocool Vicks-vending machine you have there. I didn't learn about Vicks until high school, when I had a cold. My friend told me to put a big glop of Vicks in a big bowl and pour some boiling water over it, then put my face into the steam and drape a towel over my head so none of the steam would escape. Total immersion, in other words. I think I got high from the vapor. But it worked.

Spamivore - High fevers are great for inducing crazy dreams and your dream sounds like Raiders of the Lost Ark or maybe I should say 8-Ball instead of Ark! Thanks for the comment!

We had a vaporizer much like the one pictured! It was affectionately known as "Old Bubbly". I remember the smell of the "Kaz" as well as the "Vapo-Rub" mom put on my chest. In the morning, the bedroom windows were dripping with condensation, but I felt better! Hope you do too!