RETURN OF THE JEDI: THE FIRST TIME I SAW A STAR WARS MOVIE ON OPENING NIGHT

Return of the Jedi opened thirty years ago today! The final movie of the Star Wars saga played in 1002 theaters nationwide and in my small town our local theater was one of those 1002. Like most kids my age, I caught the Star Wars fever in 1977. For the next three years after The Empire Strikes Back, my fever kept getting higher and higher without any cure in sight. I followed along the trail of Jedi crumbs that Lucasfilm sent out in the form of magazine articles and fan club reports. My circle of friends would spend hours speculating what Star Wars III was going to be like. Would Han Solo thaw out? Was Darth Vader really Luke's dad? Why was Lando wearing Han's clothing at the end of Empire? These burning questions were always followed by, "Man, I can't wait for Revenge of the Jedi! I bet we'll see a lot of Boba Fett in this one!"

The 25th of May finally showed up and I was there in the audience for the 7:00 showing. 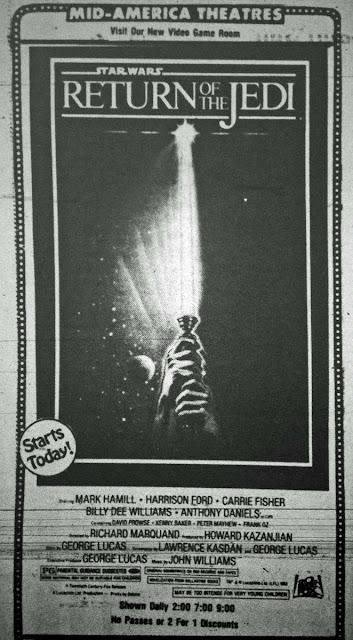 The newspaper ad for the Lake Cinema in Lake Ozark, Missouri.

I was always kind of jealous of all those lucky kids who got to see a Star Wars movie on opening night. A month before I turned thirteen, I finally got my chance to see one on opening night. It was such a special event for me, that I saved my ticket stub! Return of the Jedi ticket stub from Lake Cinema

I saw Star Wars only twice in '77 and the same with Empire in '80. I did better with Jedi and somehow saw the film eight times and all at the same theater. Because of this, my memory is kind of blurred about the first time I saw Jedi. Was it the time I saw the film with my family or the time I went with my pal Jeff? Maybe it was the time mom dropped me off and forgot to pick me up and I was forced to hang out in the theater's video game room. Regardless, I loved this movie almost as much as the first two. I even liked the Ewoks! 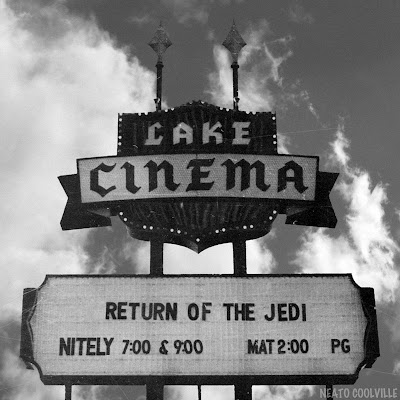 My photoshopped recreated photo of the Lake Cinema sign.

Unfortunately, I still haven't found a decent photo of the Lake Cinema from back in the day. 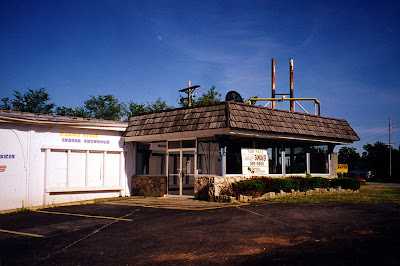 1990's photo of the empty and vacant Lake Cinema.

Keep checking back for more Jedi posts this weekend and all of next week. Plus later today, I have a Star Wars post for the 36th anniversary of the film that started it all.
Posted by Mayor Todd Franklin at 1:57 AM

Email ThisBlogThis!Share to TwitterShare to FacebookShare to Pinterest
Labels: 1980's, Jedi Week, Lake of the Ozarks, Memories from the Mayor, Star Wars

Love it! You can tell the Lake Cinema was part of the Mid America chain due to the shield logo. By the way, how was the game room?

What a great idea! I love it.very interesting to read thank you