KING KONG AT THE VOGUE THEATRE WITH RAY HARRYHAUSEN

Yesterday, the world lost a creative genius when Ray Harryhausen passed away at age 92. Like millions of other people, he was one of my heroes will be greatly missed. Since his passing, there's been an outpour of appreciation and celebration of Ray's life and talents. Instead of repeating what has already been said I've decided to take a different approach and reminisce a bit about one of my favorite fandom events; the night I watched King Kong with Ray Harryhausen! 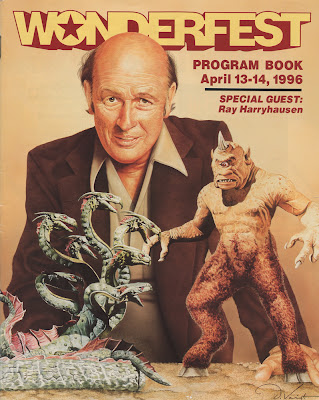 I met Ray Harryhausen for the first time in 1996 at the 7th annual Wonderfest Hobby Expo in Louisville, Kentucky. Even though the meet and greet lines were long, Ray took the time to sign and chat with his fans.

My wife and I walked away with big goofy grins on our faces as the realization sunk in that we met the great special effect wizard, Ray Harryhausen. (That's us in the GIF above and it's from a souvenir VHS featuring highlights from Wonderfest '96) 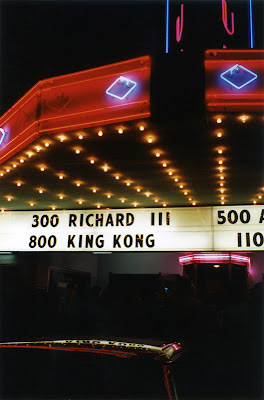 Later that night at the Vogue Theatre in downtown Louisville, there was a special showing of the original King Kong. Just seeing King Kong on the big screen was exciting enough, but to have Ray Harryhausen in the audience was sort of mind-blowing. King Kong inspired Ray just like Ray's films inspired many of today's great filmmakers. 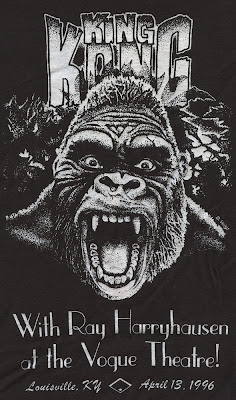 Souvenir T-shirt from the event. 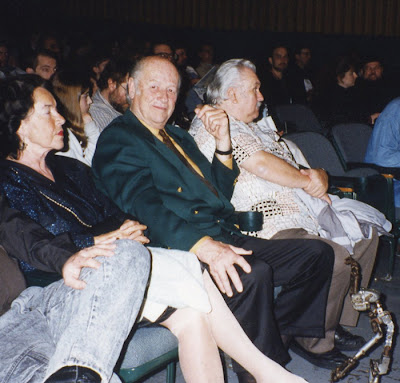 Before the film started, I snapped this photo of Ray sitting between his wife Diana and Bob Burns. Standing in front of Ray is the original King Kong armature. Like a small child, it looks like Kong wants to be picked up. 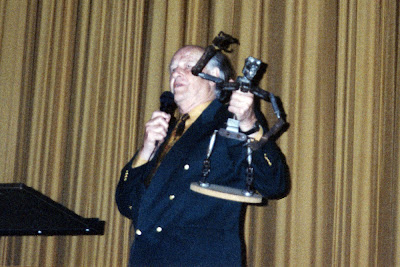 Kong got his wish as Ray snatched him up and walked on stage to the cheers of the theater audience. (Hopefully of these days someone will post a video of Ray's King Kong intro.) 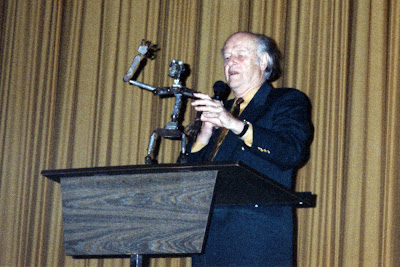 In this photo, Ray is talking about Willis O'Brien and demonstrating how to animate the armature. One of the most exciting things I've ever seen! 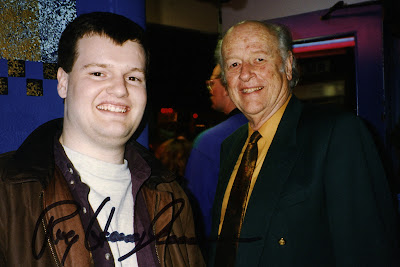 After watching the 8th Wonder of the World, I was fortunate enough to have my picture taken with Ray in the Vogue's lobby. Later that year at a different convention, I saw Ray once again and he signed my snapshot.

Ray Harryhausen was such a wonderful person filled to the brim with creativity and ingenuity. I'm thankful for all of his films and very grateful to have met a true Wonder of the World! Rest in peace Ray and thank you.
Posted by Mayor Todd Franklin at 12:24 PM

You have a treasure for the ages there!For years and years,these visionaries were within my reach at conventions such as Monster Mash and Chiller Theater,but life gets in the way,you know?Car needs repair,work schedule is crazy,stick to your budget,etc.Now,so many of them are gone,Forry and Ray are just 2 of them.I hope the best for guys like Zacherly and Bob Burns,these guys have had a major influence on who I am today.

I'm retroactively kicking myself once again for missing this. I so should have called in sick. Graat post!

What an incredible experience! I hope you have that photo hanging in a place of honor in your batcave. Thanks for sharing it!

Unknown said...
This comment has been removed by a blog administrator.
5:58 AM

Brian - Yeah, I have my share of people I would have enjoyed meeting but things do get in the way. Thanks for the comment!

Mike - Yes, you should have!