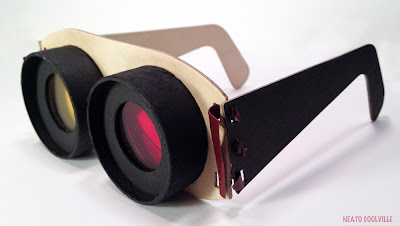 Five years ago I found this odd pair of 3-D glasses. Back then I wasn't able to find any info about these neat cardboard goggles. Were they early 3-D glasses for movies or were they used for eye testing? I had no clue. I put them on a shelf and they remained a mystery....until today. 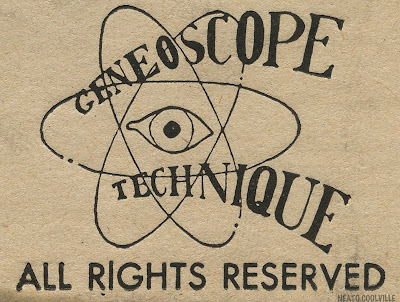 Dig the atomic style logo printed on the ear piece.

I have learned that these glasses were intended to be used for television back in 1954. Geneoscope Video Technique was invented by Mrs. Genevieve Lott-Fuller and copyrighted November 9, 1953. Soon after the copyright was issued, WEEK-TV of Peoria, Illinois signed a contract for use of the 3-D process. According to an article in Broadcasting Telecasting, the glasses were expected to sell for $1.50.

Wow, how cool is that? I didn't know that television was trying to jump on the three-dementional fad train that was hitting movie theaters at the same time. Of course it makes total sense! (I thought the first 3-D television broadcast was in 1982.)

From a 1954 International Projectionist article about Geneoscope - "Primarily for television 3-D, this process is claimed by its sponsors to be applicable to theaters as well. In this system the viewer does all the work, wearing a pair of "shadow boxes" with lenses over each eye. One lens cuts down the speed of the light rays from the screen (that's what the man says!),  the other letting the beam pass normally. The result is one image hitting the retina a split second before the other, thus giving the stereo effect." 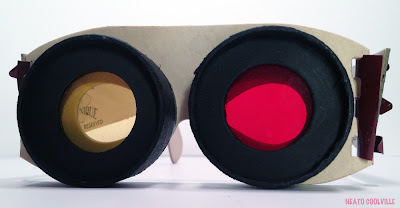 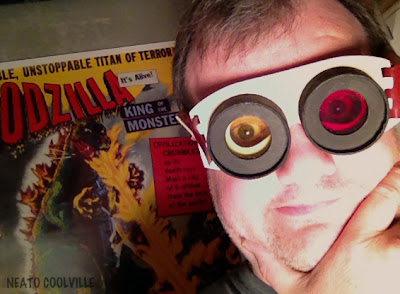 Even though I now know what my glasses are, I'd love to know more about Geneoscope. What was the live show that aired in spectacular Geneoscope on WEEK-TV? Was it a flop? Did the 3-D process work? How quickly did Geneoscope fade into 3-D and television history?

Posted by Mayor Todd Franklin at 11:22 AM

Those are super cool!!

It looks like this is an attempt to utilize the Pulfrich effect. You might remember the Super Bowl halftime show with the Rolling Stones that used it. http://en.wikipedia.org/wiki/Pulfrich_effect

Correct! The pulfrich effect, the BBC tried it once, supplying readers to the Radio Times with "3D" glasses - essentially cardboard frames with one eye having a darkened plastic film over it. The downside was the TV image was constantly panning one way or another and the characters were always moving resulting in much dizziness and nausea for some of us, in spite of any 3D benefit.