When you think of the greatest super heroes of all time, the ones that top the list are Superman, Batman, Spider-Man, Captain America and ROM!

ROM, like in Read Only Memory, ROM? No, like in greatest of the Spaceknights, ROM. That other shiny silver Marvel hero. You know, the one that came down to Earth to rid our planet of the evil Dire Wraiths that shape shifted so they could look like us. The one that was based after the first electronic action figure that was made by Parker Brothers. 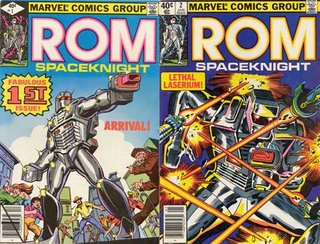 Speaking of the Parker Brothers action figure, check out this amazing TV commercial. It’s so cool it will give you goose bumps.

Good, now you remember! ROM the toy was invented by Bing McCoy and was originally going to be called COBOL but Parker Brothers decided to go with the name ROM instead. You can read an excellent interview with McCoy over at the ROM Revisited site. The toy had limited movement and tiny out of scale arms, but he still looked cool enough and made all sorts of neat sounds. He breathed heavy like Darth Vader, his eyes and chest plate glowed red and his rocket pack even flickered with red energy. Plus he had three accessories a Translator, an energy analyzer and his Neutralizer. 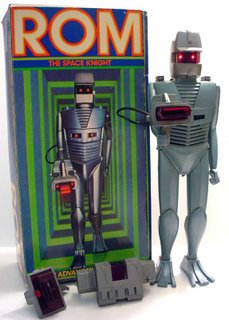 The comic series was written by Bill Mantlo, one of the best writers that Marvel has ever had and the artist was none other than our pal Sal Buscema. These two creative geniuses clicked and made this series successful long after the toy disappeared from the toy shelves. The series lasted 75 issues and is still fun to read, even today. 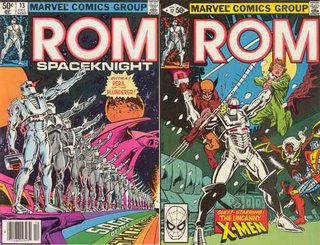 This piece of original artwork is the last page from ROM Annual #2. 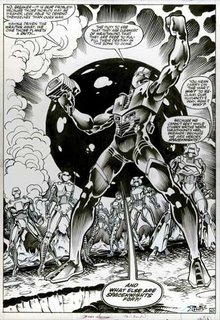 I love this photo from Marvel Age #23 of the Rom mascot suit. I wonder whatever happened to it? It would be the ultimate piece for the Rom collector. 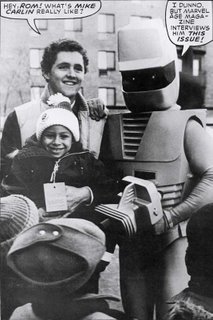 With all of the comic book movies out there, maybe someone will notice ROM Spaceknight and adapt it to the big screen. It would make for an exciting film, full of emotion and angst. 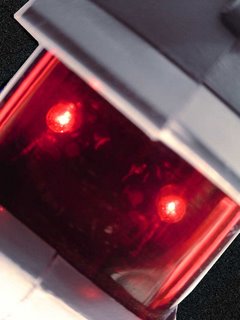 Oh, WOW! Thank you for that. Great post. I'd never seen that commercial.

Thanks! I hadn't seen the commercial either and when I found it on YouTube I thought I better dig out my ROM toy and comics for a post!

Great blog!
Please let me know if there's a place to get spare ROM parts. I'm missing the power cord!

Hi Jeff -
Thanks for stopping by! Try to watch ebay for one or maybe you can salvage one from a beat up Rom toy. Good luck!

Let me know if you'd be interested in using some new ROM art on your site. This is stuff no ones ever seen before.