We started out the day waiting in the wrong line to get inside but it wasn’t a big deal since we enjoyed talking with people that were stuck in line too. One of the best things about the Con is that most people are really nice.

We checked out the Funko booth and the Flapjack Toys booth and enjoyed meeting the Chairman of Fun himself, Mike Becker. Mike is the founder of Funko and he has now started up Flapjack Toys. His new vinyl figures are out of this world and I really liked the Ivan vinyl from the Spooky Kookys line and Mike even signed the back!. You can see a groovy animated version of the SK boys here created by Mr. Secret Fun Spot, Kirk D. (I’ll talk about meeting Kirk D. on the Day 3 post). 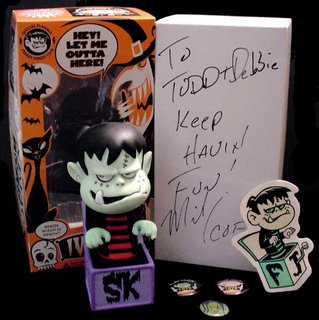 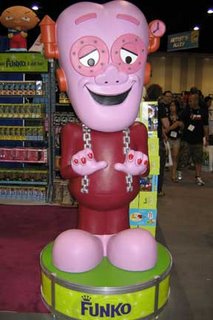 One of the main reasons for coming to this year’s Con was to meet one person, my favorite comic book artist, John Romita. We met him over at the CGC booth and he showed up to sign and meet with fans. He was also there to promote A.C.T.O.R. an important charity that helps out comic book pros in times of need. John and his lovely wife Virginia were super nice and were so much fun to talk with. He signed some comics, my sketchbook and the Marvel book. Meeting the Romita’s made my convention!!! 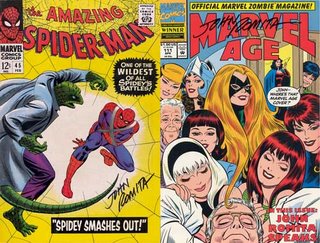 I think most of my childhood was there in that overstuffed building in some form or another. I got my ticket to get in line for a chance to meet and get an autograph from Carrie Fisher and David Prowse. It was a thrill to briefly meet Carrie and get a photo signed. David was really a gentle giant and luckily since his line wasn’t very long he took the time to chat a bit and pose for a photo. The 7 year old in me was yipping for joy! 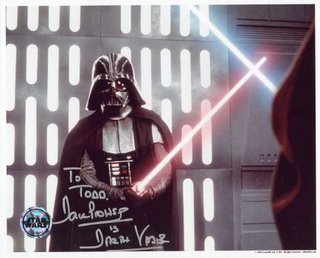 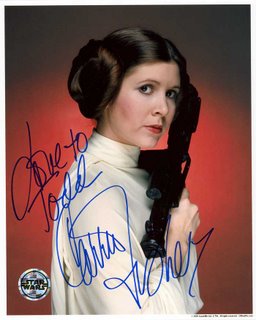 We attended the Jack Kirby panel that was moderated by Mark Evanier with Neal Adams, George Perez, Mike Royer and John Romita. Everyone shared stories about the King and the infamous Johnny Carson clip was shown where Carson makes fun of Jack, not knowing who Jack Kirby was. Paul S. Levine, Jack’s lawyer was there to tell how the problem was resolved with Johnny apologizing on the Tonight Show. Once the Kirby panel was over the John Romita panel started and we learned a great deal more about this amazing man! It was the best panel we attended!

Next we went over to meet Cassandra Peterson the one and only Elvira. She was very pleasant and took time to visit with each fan. 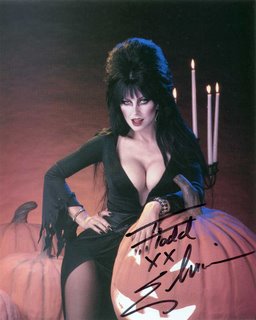 Since the day was coming to a close we decided to rest our feet and go to the New Line Cinema Snakes on a Plane panel in the filled to capacity Hall H. It was moderated by the very funny SNL player Keenen Thompson with Samuel L. Jackson, the director David R. Ellis and a bunch of snakes!

The last panel of the day was the very wrong and the very disturbing animated ‘toon, the Happy Tree Friends. This show is bad on so many levels and that’s its charm. You can’t help but to laugh at these cute little animals as they have their entrails and limbs ripped from their fuzzy bodies. Also, you can’t get the theme song out of your head! 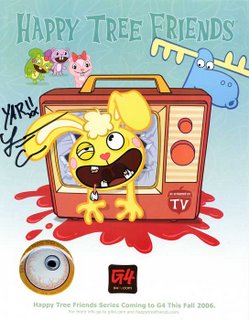 After the Con, we traveled by cab to grab the best burger and fries on the planet at In-N-Out Burger. With the cost of the cab and the food, it might have been the best $40 we have ever spent! Whenever we’re in California we always take advantage and eat at one since we don’t have them in Missouri. Mmm, the Double-Doubles were yummy! 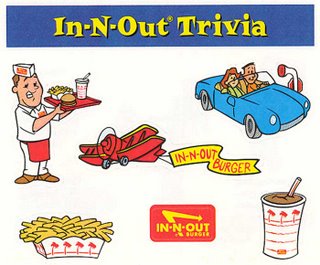 I suddenly have this urge to eat some Franken Berry while sitting in front of the TV watching my Star Wars (original version) VHS tape with some 60's Marvel (or better yet, 70's DC) by my side. I don't know why I'm having these urges.

Wow. And all that by day 2?
Sheesh, you really made the most out of that trip.

In-N-Out really is the best. You made a wise investment.