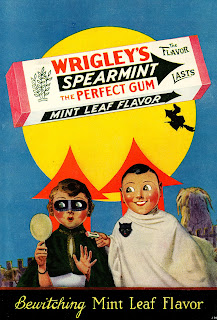 I’m sure most of you know why the girl is looking into her hand mirror, but for the ones who might not know, she is practicing an old Halloween superstition that was popular in the Victorian era and in the early 20th Century. If an unmarried woman looked into a mirror on Halloween night, she just might see the image of her future husband. Of course if she saw a skull in the mirror then she would die unmarried.

The Wrigley girl has a surprised look on her face. Whom does she see in the reflection? We’re supposed to think that she’s startled because the clever boy popped up behind her placing his face in the mirror’s reflection. Hmm... is that really the case or is she startled because of the shaggy dog that’s behind them. Does she see the dog’s reflection instead of the boys? At least the Wrigley boy wasn’t a prankster because he could have worn a skeleton mask!
Posted by Mayor Todd Franklin at 12:00 AM