THE ULTIMATE WEAPON: KID FILMMAKING FROM 1981

We have a special treat for you today as we have a guest post by my pal Tim Williams. Take it away Tim -

It was the long ago year of 1981. I was sitting in Junior High English class with my friends Mike C. and Scott S. as the teacher told us we had a big project coming up worth a lot of points. 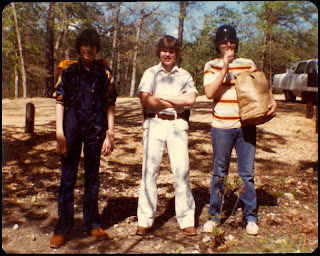 Suddenly inspiration hit. (And by "inspiration" I, of course, mean "madness.") Instead of doing a boring report, my friends and I would make a film that I would write, direct and edit! The teacher, no doubt suffering a mental breakdown of her own, readily agreed. I would write a science fiction epic starring my two friends. There would be spaceships, aliens, laser battles and even a twist ending with a message at the end. We'd shoot our movie on an old wind-up 8mm Bell & Howell camera that my parents owned and hadn't used in nearly a decade. And we'd do it in....less than a week and a half?!?

As the deadline approached I wrote a script. However, Rod Serling Junior I was not. But I still had high hopes. We met on a Saturday at a local park to shoot the main part of the script with the special effects (spaceship battle and crash on earth) to be shot later. I loaded the camera with film and put everything in my orange day-glo backpack and set out to shoot my "epic." 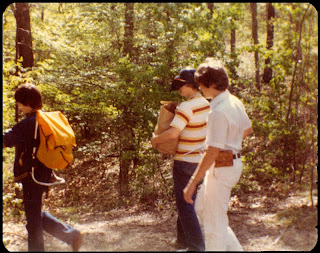 Mike C. was the hero in charge of delivering the "ultimate weapon" built off-world to Earth to stop an alien invasion. Scott S. was the alien assassin who was to kill the hero and steal the weapon before it could be used against them. A couple of hours and several smoke bombs set off in the state park, we had most of the footage. 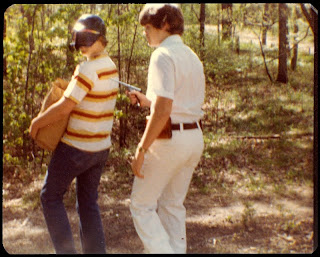 I got home and started getting toy spaceships and a space backdrop ready only to realize that I had used all of the 8mm film while shooting in the park. (For those of a younger generation, this was pre-home videotaping. I had to actually buy 8mm film at the local Wal-Mart, load the camera, expose it, unload the camera and take it back to Wal-Mart and send it in to be developed, a process which usually took a week.) With no time to buy more film, I decided I would add a prologue via audio tape later when we had to present the film to the class. I packaged the film up, took it to Wal-Mart and waited. And waited. Nearly every day I would call Wal-mart to see if it was in with no luck. As the deadline approached, my friends and I began to get worried. What if the film got lost? What if the film got exposed and was useless?

Then, the day before it was due I called and the film had arrived! I quickly had my mom drive me to the store to pick it up. I rushed home, threaded the old 8mm projector and watched my film unfold. Sure, it lacked a flashy sci-fi opening and was basically a chase scene but it made me happy. The film had survived and we had a project. I set about splicing it together despite the fact that 1) I didn't have an editor so had to hold segments of film up to an outside window to see what scenes I was splicing and 2) I had never actually edited OR spliced film before. I worked late into the night but couldn't get it finished. The day came that it was due. I woke up bright and early and did the only thing a budding filmmaker could do when his project was unfinished but due that day. I stayed home and played hooky in order to finish it. With a few more hours of work and some emulsion scratches to make it look as though lasers were shooting out of the laser guns (thank you "Cinemagic" magazine), I was done.

The next day I premiered "The Ultimate Weapon" to the class along with a recorded prologue (unfortunately lost to time) and music (also lost to time) to great success. Despite its shortcomings, it was a film! Not an oral report like everyone else gave but an actual FILM! We not only got full points but extra credit points as well. And while the twist ending that the "ultimate weapon" was really just a falsehood, a trick to frighten off alien invaders didn't really pan out, I was happy. I had managed to write, direct and edit a film on 8mm film in a very short period of time. Since then, I have been fortunate enough to see a lot of other kids like me from that era make even more ambitious home movies. I salute all of those monster & sci-fi kid filmmakers who tried and succeeded despite all of the odds against them as well as all of those future filmmakers who are currently busy shooting and editing their own epics. While we didn't have HD cameras and non-linear editing computers back then, we were inspired by the ingenuity and spectacle of films that had come before to at least attempt to be part of that magic, dream of what we might be able to achieve on film and have a lot of fun in the process. 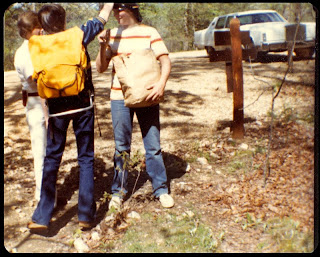 Thanks Tim for sharing your fun memory with us! CLICK HERE to view The Ultimate Weapon with a special intro by KRYP-TV’s Timothy Grimm.
Posted by Mayor Todd Franklin at 12:05 PM

Vlad thinks the explanation of the making of the film was longer than the actual film itself!