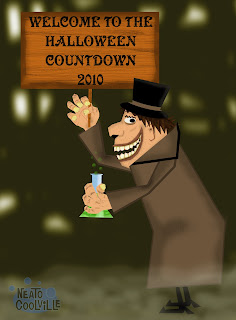 Freaky, freaky five! It’s the fifth Neato Coolville Ghoulville countdown to Halloween! The blog just drank Dr. Jekyll’s potion and has been transformed into a fiendish monster from All-Hallows-Eve. Every day until October 31, you’ll see posts related to Halloween, monsters or anything deemed creepy enough for the countdown. Of course, you won’t have to cover your eyes too much, as everything is gonna be family friendly fun.

SEE old magazine scans and advertisements that have been dug up from the grave!

SEE snapshots and slides of Halloween people from another time!

SEE old and new packaging that should have been thrown out years ago!

SEE the colors of a town turn orange and black in the twitter feed.

SEE a movie trailer for a movie that never was!

SEE a mayor go off the deep end and explode because of this blasted countdown that he tortures himself with every year and every day of every October. Ha ha. Just kidding(sort of). ~ahem~. Moving right along.

Seriously folks, we have lots of treats planned. Catch all the Halloween goodies right here, Weird Hollow, facebook and twitter.

Also, be sure to click on the official Countdown to Halloween Crypt Keeper button on the sidebar to check out all the other Halloween Countdown blogs. There’s a ton this year! 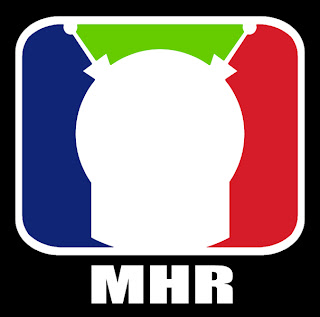 Enter the third Monster Head Races contest for a chance to win a prize! Last year’s race was a roaring success and Saucer Man was crowned the MHR champion. Saucer Man is back to defend his title and race against a whole new batch of nefarious noggins. 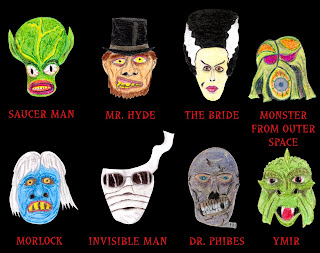 Wanna chance to win a monster of a prize, then “head” over to Weird Hollow, follow the instructions and pick the monster head that you think will win the tournament. Everyone is invited to enter the contest. Don’t delay, ‘cause you only have until Oct. 6 11:59 p.m. Central time to enter. Then watch the races all month at Weird Hollow every Tuesday and Thursday to see what monster head will be crowned this year’s champion! The first race is Oct. 7!
Posted by Mayor Todd Franklin at 12:00 AM

Mr. Mayor, I can't believe we've been doing this for 5 years now. One more year and I think we get taken to the looney bin.

"I Married a Monster From Outer Space" is one of my favorite 50s films, so put me down on the monster from outer space for the Monster Head Race.

Five is the magic number (it's the fifth year for me as well.) Looking forward to haunting Coo..Ghoulville this season...

Goin' with the Invisible Man this year. Did you see that? There he went past the finish line! Oh yeah, baby!

5 years is crazy! How did I ever find enough stuff to post?

Well, I was pretty bummed last year when my fav, Godzilla, got taken out early in the game. But when you think about it what should I have expected. The guy is huge, there's way too much drag! This year I'm going for the much more svelte Bride. I think she has what it takes to leave the guys in the dust. Heart like a wheel!

Gotta go with the good Doctor this year.
Thanks again for make October spook-tacular!

This is only my fourth year; my blog doesn't turn five til next summer. I missed out on all the fun you guys were having!

Happy Halloween Countdown, mayor - it ain't October without you!