A SALUTE TO CAPTAIN AMERICA: THE FIRST AVENGER 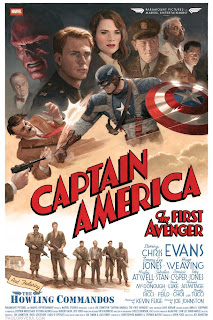 After this past weekend, I hope everyone has caught Cap fever!

Yes, I watched the new Cap movie, Captain America: The First Avenger over the weekend and it’s now my favorite Marvel movie! This is the movie I’ve been waiting to see ever since me and my nerdy college pals used to waste hours discussing how a Cap movie should be made. All of us agreed it should take place in World War II and Joe Johnston should direct. Yep, we predicted Johnston would direct Cap almost twenty years before he really did. All of us were razzmatazzed by his movie The Rocketeer and so he was the obvious pick. Of course we missed on the actor who would wear the red, white and blue. Hey, Chris Evans was only ten years old back then. I voted for John Wesley Shipp from the 1990 TV show The Flash. I remember one friend lobbied for football player Howie Long to play Cap.

Captain America: The First Avenger wasn’t exactly the movie I dreamed of, but it came very close. The movie does a good job capturing the schmaltzy spirit of the movie serial adventures from the 1930s and 40‘s. What it lacks in emotion, it makes up for with plenty of action and style. It’s simply a popcorn movie, with extra butter! I did wish for more character development with the secondary characters. We didn’t get to know Bucky and the Howlers as well as we should have. (Ok Marvel, you now need to make the spin-off movie The Howling Commandos!) My favorite scenes were the USO stuff and my new favorite song is Star Spangled Man. 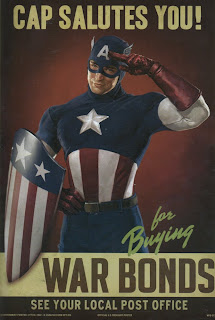 The USO montage was brilliant and I hope and pray we see a few chapters of their version of the Captain America movie serial on the DVD. Finally, it’s good to have a super hero on the screen that’s not filled with angst and rage, but instead is filled with courage and loyalty.

I saw the movie with family and friends including one of my college buddies who was in on the Cap movie discussion twenty years ago. The big thrill of the night was that my seven year old nephew surprised me with this awesome replica of Cap’s shield using a paper plate. 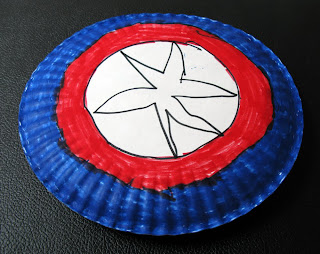 He made it especially for me after we saw the movie. I own and have owned many great collectibles, but this shield is now one of my favorite possessions.

For fun, I’ve included two Cap sketches I got from two excellent artists. The first is from the great George Tuska with his unique ruffled feathers on Cap’s cowl. 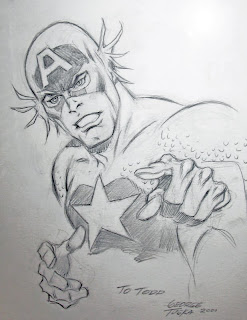 The second one is a fantastic Cap sketch from John Beatty! 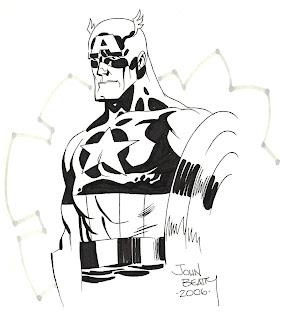 Let’s finish this post with a fake photobooth photo of Cap. 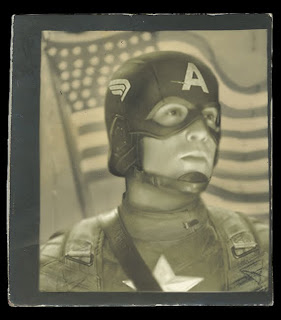 I made this a few months ago in anticipation of the new film using the flag background from a photobooth photo that can be seen here. After seeing the film I would like to redo it using the more appropriate USO costume instead. Maybe when I find a better scan I’ll take a stab at it.

Now go see Cap and have fun rooting for the good guys! Be sure to watch all the credits for the swell propaganda poster art and something special at the end.
Posted by Mayor Todd Franklin at 9:24 PM 1 Neato Comments

KICKIN' AROUND ON KICKSTARTER 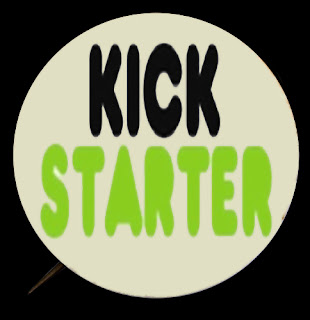 For the first time I finally snooped around on Kickstarter. Wow, this site is truly a machine that turns dreams into reality. I know I’ve only scratched the surface, but here’s a few projects that caught my eye. Most of them have already met their pledge goal, but a few still need pledges. Click on the links to view some neato cool projects.

The White Elephant Card Game - A clever card game that looks like a lot of fun!

Muffler Men: One Hand Up, One Hand Down Documentary - Someday Muffler Men will rule the world, but before they do, this doc looks to teach you all about the roadside giants.

OMFG! - Outlandish Mini Figure Guys! - I was a fan of M.U.S.C.L.E. back in the 80's. OMFG! looks to bring back the spirit of that classic line with five outlandish mini figures.

Growing Up On Skywalker Ranch by Eric Walker - Go behind the scenes of the Ewok Adventure and Battle for Endor as told by the star of these Lucasfilm TV films.

The Cicada Princess - As a fan of stop-motion films like Nightmare Before Christmas and James and the Giant Peach, I can't wait to see the finished film.

Viva Amiga - The Documentary - I love this title and I loved the Amiga.

There you have it, my short list of awesomeness that I found on Kickstarter.
Posted by Mayor Todd Franklin at 11:01 AM 0 Neato Comments

A FILM SMORGASBORD AT INDIEPIX UNLIMITED

Indiepix Unlimited is HERE! from Nicolas Doldinger on Vimeo.

Now click on the banner above and take advantage of the free one month trial. You’ll find a wide range of films that cover many different and unique subjects.

Right now you have a ticket to view Oliver Maitland Hudson’s new short film, Canary on a free stream from Indiepix. Click here to watch a man train and eventually go for the world breath-holding record. It’s quirky cool!