All this week Kentucky Fried Chicken restaurants have been celebrating the 70th anniversary of Colonel Sanders’ famous original recipe. Harland Sanders, (he didn’t become a Colonel until 1935 or '36), first served his chicken with eleven herbs and spices in 1930 at his gas station in Corbin, Kentucky. It wasn’t until the 1950's when the Colonel started to sell his chicken to be served in restaurants across the nation. Eventually, in 1952 the Kentucky Fried Chicken chain was born and the first restaurant was in Salt Lake City.

Yesterday, the first lady and I decided to celebrate with a bucket of chicken. As a fan of any retro style packaging, I got a thrill that our chicken was served in this 70th anniversary replica bucket. 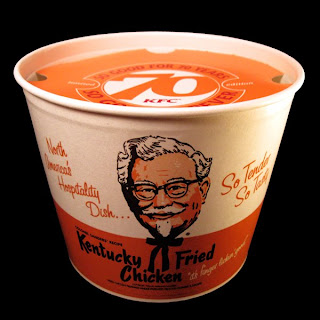 Here’s a photo of an original bucket from the 1960's. Boy, the size and price of the bucket, sure have changed. 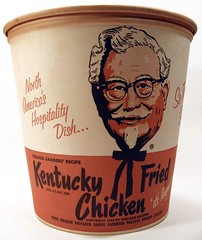 The first bucket appeared in 1957. Did you know that Wendy’s founder, Dave Thomas came up with the chicken bucket? Yep! He also suggested it spin outside on the sign! The famous chicken bucket has become an important piece of popular culture. I have almost 5000 images in my flickr archive and my most popular photo is of a KFC chicken bucket. The photo below is closing in on 30,000 hits! Crazy man, crazy! 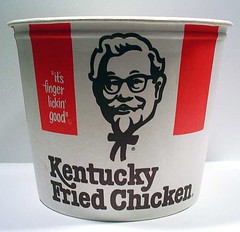 You know chicks dig the bucket, dontcha? Also, The Price Is (always) Right for a chicken bucket!

My pal Allen of Roadside Pictures has a nice archive of Kentucky Fried Chicken items here.

Also, check these photos out from Through Joanne’s eye here and here. So lucky that she met the Colonel!

Posted by Mayor Todd Franklin at 9:54 AM 5 Neato Comments

A real treat for roadside enthusiasts will take place at Tiki Oasis in San Diego, California August 20th. The good folks from Vintage Roadside, Jeff Kunkle and Kelly Burg apparently built a time machine that helped them put together an amazing presentation - Beautiful Girls That Live Like Fish - The Story of Aquarama. The roadside T-shirt duo have unearthed a giant clam shell full of info relating to this lost 1960's attraction. Once located at the Lake of the Ozarks region in Missouri, this mermaid show was one of the most unique attractions in the show-me state. 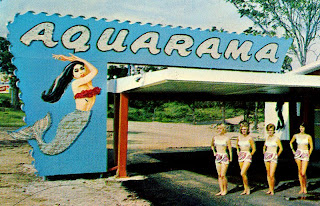 Everyone attending Beautiful Girls That Live Like Fish - The Story of Aquarama, will be introduced to this almost forgotten attraction thru original film footage and actual sound recordings from the 1960's. Even tho I can’t make it to the event, I’m very excited that Aquarama is about to live again thanks to the hard work and dedication of Jeff and Kelly!

Jeff and Kelly first blogged about Aquarama in 2009 with an excellent interview with a real Aquamaid. Both parts can be read here and here.

Be sure to check out Tiki Oasis and for your retro roadside attraction shirts visit Vintage Roadside. Also, you can fan/like Vintage Roadside on facebook. You'll have company with their 3000+ fans!
Posted by Mayor Todd Franklin at 5:47 PM 1 Neato Comments

For all of you comic book history buffs, here's a treat for you. This article comes from the February 1946 issue of PIC The Magazine For Young Men. Comic book legend Mort Weisinger writes an article that shines a glamourous light on the comic business.

The first page is a photo of Milton Caniff sketching Dororthy Partington, the model for Miss Lace from the military comic strip Male Call. The second page has a photo of Joe Simon and Jack Kirby working on an issue of The Boy Commandos. 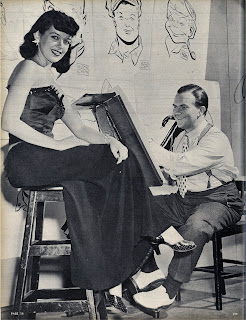 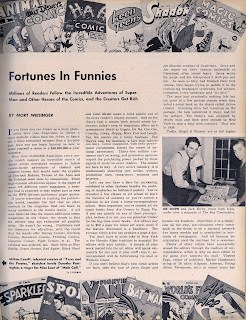 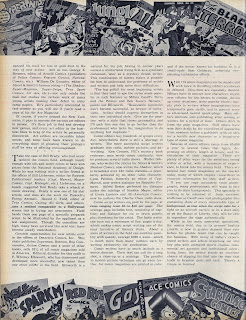 For fun, I put together the mosaic below of the comic covers partially pictured in the article. Comic covers are from the Grand Comic Book Database. 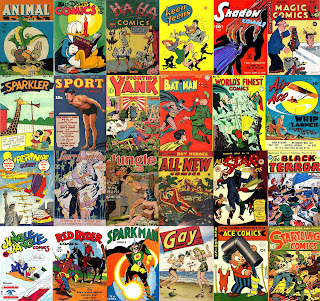 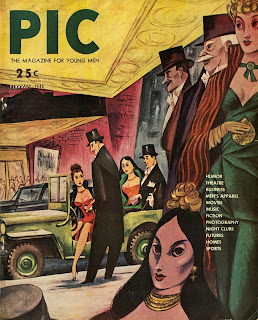 IN CASE OF NUCLEAR WAR, RUN TO THE CLOSEST TOURIST CAVE 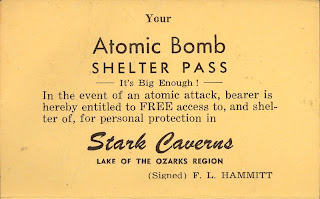 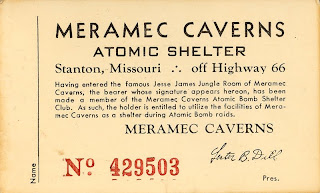 I only have two of these, but I think they're amazing artifacts from the cold war era.

Can you imagine if an atomic attack had occurred? "Honey, don't forget our Atomic Bomb pass for the cave." Caves were always listed as fallout shelters and I'm sure most of the town would have flocked to one of these caves. I can picture it now. A teen-age tour guide stands in front of the cave checking for Atomic Bomb passes. "Sorry, sir, but you don't have a pass. Next."
Posted by Mayor Todd Franklin at 10:48 AM 2 Neato Comments

Who remembers Captain Choco’s Cereal? If you didn’t shop at Save-A-Lot stores in the 1990's chances are you don’t know Captain Choco. Luckily I managed to save a couple of boxes. 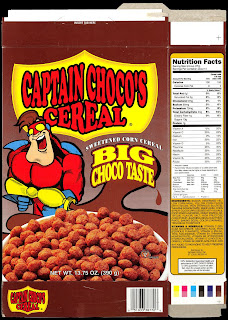 Distributed by Moran Foods, Captain Choco appeared on the cereal shelf sometime in the mid-90's. This box is from 1995. Captain Choco looks like he could be the third cousin twice removed of another square jawed hero popular on kid’s TV at the time. “Hey Captain Choco, the Tick is calling and he wants his chin back.”

Even tho he might be a bit of a rip-off, that’s ok - I still like the big lug. Hey, anyone who has a cool looking ray gun that shoots out chocolate is ok in my book!

On the back of every box you got one episode of Captain Choco’s Cereal Serial in comic book form along with the players introduced on the side panel.

First, here’s the serial players and then followed by the two serial episodes. Don't forget to click the images for easier viewing. 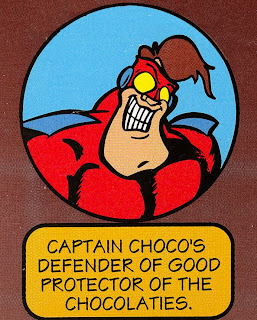 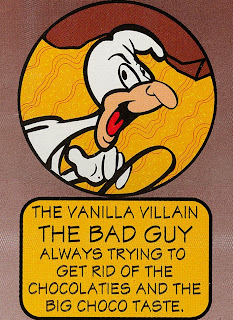 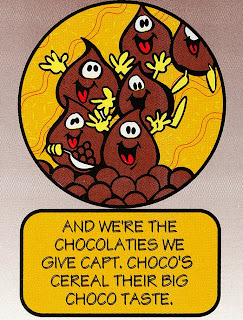 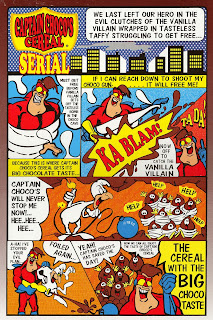 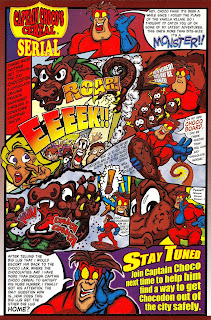 This second episode didn’t start showing up on the back of boxes until 1999. Looks like the Captain lost his comb, but he did find a new Choco Board to help him defeat the Chocodon.

Unfortunately, these were the only two episodes that I ever found and I wonder if any more were ever created.

A smaller single serving box showed up in a variety pack sans the comic serial. 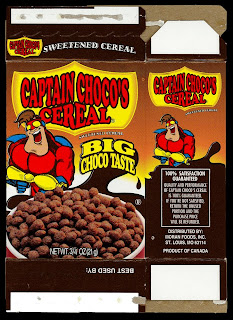 I guess being a cereal mascot was not enough for the captain, so he started hocking this - 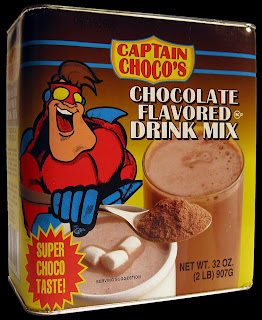 In the early 2000's Captain Choco turned in his Choco gun and Choco board and retired from the store shelves. Rumor has it that he returned a few years ago trying to sell his cereal in a bag.

Wherever you are Captain Choco, I just want to let you know that you are missed by your many adoring fans? Ooh, maybe I shouldn’t use the word many, but instead say you are missed by a few adoring fans. Hmm... ok. You’re probably missed by just one adoring fan, me. Hey, at least that’s better than none. Right? Keep that chocolate chin up!
Posted by Mayor Todd Franklin at 3:11 PM 3 Neato Comments

This is Kongerrific! Thanks to Vlad for sending this my way!

Uploaded to YouTube by capecodshorts.
Posted by Mayor Todd Franklin at 12:00 AM 0 Neato Comments 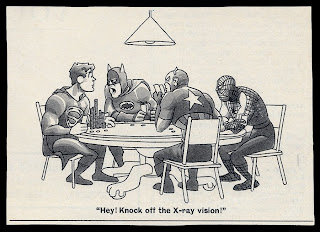 I was digging thru a box of old paper and found this comic strip. My grandma cut this out of Parade Magazine back in 1994 and thought I'd get a chuckle from it. I completely forgot all about it, until today. It still makes me laugh!

If anyone knows the artist, let me know so I can give credit.
Posted by Mayor Todd Franklin at 11:22 AM 1 Neato Comments 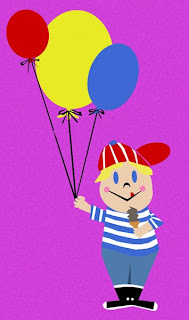 Vist the Neato Coolville twitter page or check out the parade in the side bar. If reading along on the blog, keep hitting your refresh button.

Whew! Had a fun time at the parade this morning. If you missed the parade you can go back and read the the parade reports. Just scroll to the bottom of the twitter page and click more and find the first parade tweet.

Now that I have my feet wet with twitter, I'll be posting one (or maybe two) tweets a day relating about the actual town of Neato Coolville.
Posted by Mayor Todd Franklin at 10:46 AM 2 Neato Comments 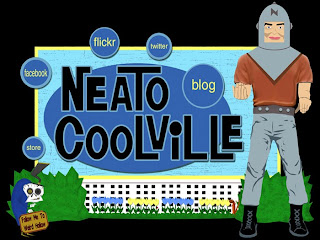 To help celebrate, neatocoolville.com just got a new facelift. Before, it was nothing more than a simple entry page for the blog. The website is still an entry page, but now with all the links to find your way into Neato Coolville.

A quick run down of the different Neato Coolville sites -

Twitter - Now you’ll be able to read about the imaginary town that lives inside my head. Not your normal twitter page - sort of a comic strip without the artwork. Tomorrow we start everything off with reports from a big parade as the town celebrates being on twitter. The parade starts at 11:00 A.M. on Wednesday August 3rd.

Facebook - Neato Readers who are facebook users can keep up on blog posts and other Neato Coolville related news. Besides the blog links, we’ll have some exclusive facebook content. There will be movie quotes every Monday and an album of fun facebook icons that you can use for a new profile pic. New icons are added all the time. Plus a lot more facebook surprises along the way.

Flickr - Later this year I should hit 5000 images and I’ve recently tried to tidy up with better organized sets and newly added tags. Flickr is always a work in progress.

Blog - The blog will remain the same with the random posts of stuff that I find cool enough to blab about. I have some week long events planned and again I’ll be participating in the month long Halloween Countdown this October.

Weird Hollow - Speaking of Halloween, Weird Hollow will also be part of the countdown with the help of my pal Vlad. We’re planning some ghoulish fun this fall. More Vlad videos, the thrid annual monster head races and whatever else our "Abbey Normal" brains can think of.

So jump on board and ride the Neato train of websites! ~~Choo-choo~~ Who knows where it will end up?

Thanks to everyone who visits, follows, links, likes, comments and lurks! I hope this new expansion will add to the fun.

Also, thanks to the brother of the mayor, for uploading and setting up the new website! Thanks bro!
Posted by Mayor Todd Franklin at 12:00 PM 2 Neato Comments