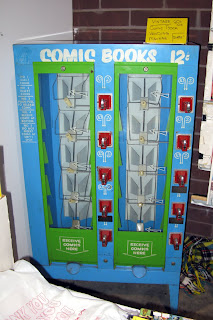 Over the weekend I attended Planet Comicon and one of the coolest things I saw was this comic book vending machine from the 1960's. Oh man, did my jaw hit the floor when I saw this.

As I was gazing upon this amazing funny book dispensing machine, a fellow standing next to me said, "I can't believe it, I haven't seen one of these since I was a kid." For him it was a special moment, as he told me back when he was a kid he purchased comics from a comic book vending machine just like this one at the United Super supermarket in Independence, Missouri.

The dealer who owns the machine said it came from an ice cream shop somewhere in Kansas City.

If anyone has any memories of this machine please share them in the comments.

Update - Devlin Thompson found the patent for this and posted it on his swell blog, The Home of the Bippy. Visit his post here. Also, be sure to read the comments as some Neato Readers have added some great memories of the Comic Book Vending Machine.
Posted by Mayor Todd Franklin at 11:19 AM 28 Neato Comments

CHECK OUT THE STAR WARS COOKIES AT OC WEEKLY 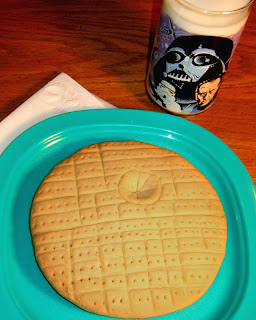 I was invited to include my Death Star Cookie photo in OC Weekly's popular slideshow.

Out of the ten Star Wars cookie photos, my photo is number four. Grab yourself a glass of Aunt Beru's blue milk and visit OC Weekly to view the slideshow.

You can visit my original post with my Death Star cookie and get the recipe by going here.
Posted by Mayor Todd Franklin at 11:39 PM 4 Neato Comments

Email ThisBlogThis!Share to TwitterShare to FacebookShare to Pinterest
Labels: Check It Out, Star Wars

A few days ago I was out digging in the dirt and shaking the bushes in search of some cool old stuff and lo and behold I found a tin with a neato ad character! 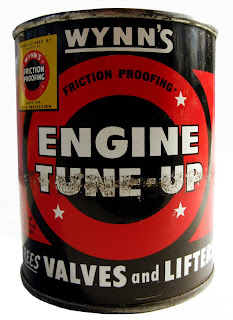 Nothing too special about the front, but when you look at the lid you’re greeted by the Auto-Medic. 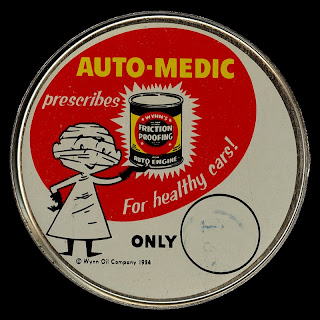 After I brought him home, I remembered buried deep in my tub of magazine ads I had an ad with this guy.

To me he kind of looks like the Invisible Man without the cool sunglasses. Maybe he’s the Unknown Soldier from DC Comics. Yeah, that’s it, Unknown Soldier went to work for Wynn after WWII and became the Auto-Medic. 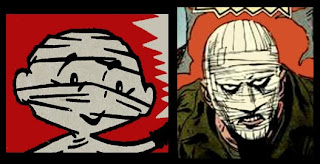 (Sorry, getting off track there.)

The Auto-Medic is kin to another fun Wynn ad mascot and I posted him during the 2008 Halloween countdown. He’s name is the Wear-Wolf. You can visit that post here.

Take a look at this store display featuring the Wear-Wolf. 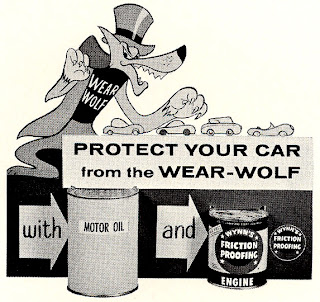 A little while back the first lady and I watched the classic atomic bomb movie Panic In Year Zero and noticed a Wear-Wolf display co-starring in a scene with Ray Milland as seen in this screen grab. 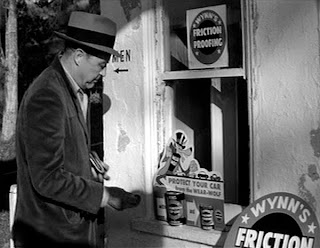 Sad, but true, I get excited when I see old packaging or products in movies.

Maybe someday in a future Flea Market Fridays I’ll post that I found this same display. Boy, that would be something!
Posted by Mayor Todd Franklin at 9:29 PM 3 Neato Comments

THE END OF THE RAINBOW

Back in 2004 while driving in South Dakota, the first lady and I almost found a Leprechaun and his pot of gold at the end of a rainbow. Below is a short video the first lady shot out of our car and from our goofy commentary you can tell we were pretty excited to see it!

Thanks for watching and now I’m off to celebrate St. Pat’s Day with a Shamrock Shake! You know, McDonald’s should team up with General Mills and create a Shamrock McFlurry with Lucky Charms mixed inside. That would be magically delicious!
Posted by Mayor Todd Franklin at 10:29 AM 0 Neato Comments

I MET GRIMACE & THE GANG

You might remember from last year that I missed out on meeting Grimace live and in person at our local McDonalds. I documented the missed opportunity with a Polaroid photo that you can see here.

Fast forward to this year and rewind just a couple of days ago as Grimace once again visited our McDonalds and this time he brought a couple of his pals. I almost missed their arrival, but thanks to my friend Tim for his enthusiastic phone call letting us know that the Beatles, uh McDonaldland characters were in town waving at traffic.

The first lady and I hopped in our jalopy and we zoomed to McDonalds! 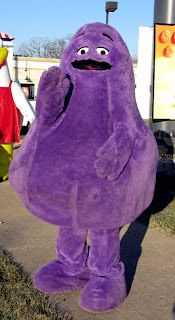 Since we didn’t have any hamburgers on us, it was safe to greet Hamburgler. “Hi Hamburgler!” 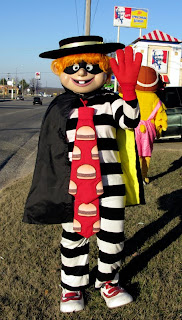 Next we visited with Birdie the Early Bird. “Hi Birdie!” 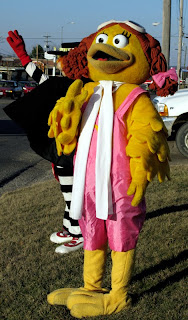 Oh yeah, there was one more mascot that tagged along, but he wasn’t part of McDonaldland. 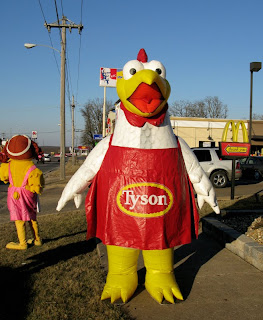 Don’t tell the Tyson Chicken, but really we were kind of scared of him.
Posted by Mayor Todd Franklin at 8:50 AM 8 Neato Comments 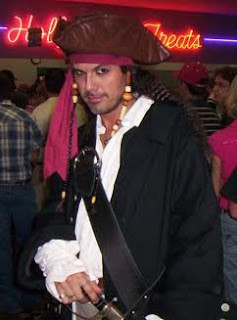 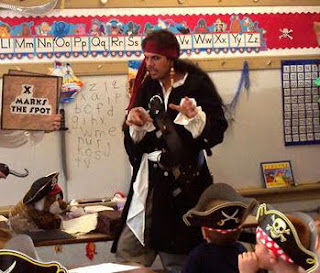 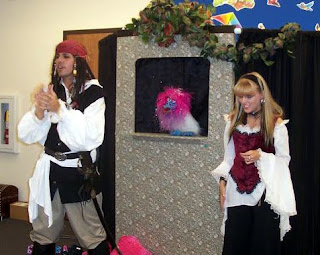 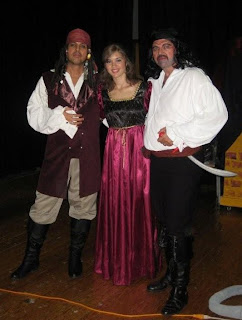 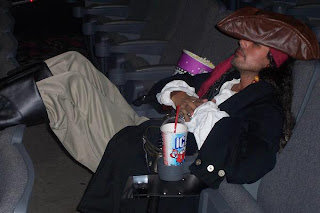 Yes, Tim you have and a darned good pirate you are! Keep on pirating my friend!
Posted by Mayor Todd Franklin at 11:02 AM 2 Neato Comments