People have told me that I was lucky, my mom said that I was blessed and I say it was just short of a miracle that I found the Death Star model used in the filming of Star Wars. 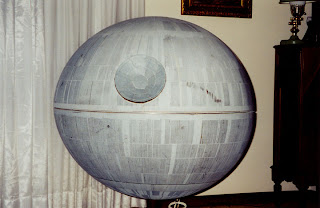 
It’s hard to believe that a major part of film and pop culture history wound up in the Missouri Ozarks!

My connection with the Death Star started in 1988, the summer after my high school graduation. I was working for a local TV station as a cameraman on an ongoing TV series about the Lake of the Ozarks, a popular Missouri tourist area and the place that I’ve called home most of my life.

We were working on a feature about antique stores in the area and we ended up visiting the Mexican Hillbilly. Outside of the store were scads of statuary, old pottery, some giant oranges (used in commercials) and a big gray ball that oddly enough looked like the Death Star. I had a hard time concentrating on my work that day and as a Star Wars fan, I was giddy with excitement. 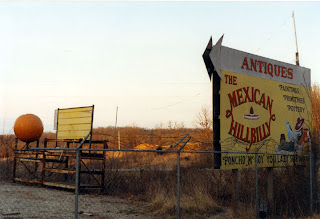 Mexican Hillbilly Antique store after it had gone out of business. (1994) 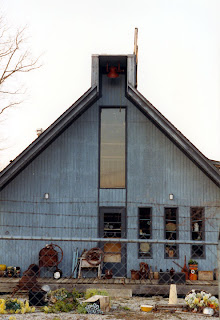 I had read enough books about special effects and the making of Star Wars that I suspected this could be the actual model from the movie, but why was it here in Missouri and was it real? That night, I wore out the pause button on my VCR remote watching the Death Star scenes over and over.

The next day, I visited the Mexican Hillbilly by myself and I talked with the shop owners. The story they told me was that they owned a warehouse in California and the filmmakers stored the Death Star there. When they decided to close the warehouse and move to Missouri, they repeatedly contacted the filmmakers asking them to pick it up or it would be discarded. When the time came for the move, they told the movers to trash the Death Star. Luckily, the movers didn’t listen and the Death Star was moved along with everything else to the Missouri Ozarks. (They also told me that they’d never seen Star Wars.)

Naturally, I didn’t have a dime to my name thanks to college tuition that I had just paid only a few weeks before. I tried to convince my parents to buy the model for me, but they weren’t thrilled about spending money for something that large and for something that might not even be real. They agreed to buy it for me if I could prove it was the real movie prop.

My next step was to contact Lucasfilm, which I did by leaving a telephone message with an operator about what I had found. Later that day I got a call from Judy Niles, who informed me that the model I had found was more than likely a fan made and according to her, the original Death Star model was destroyed during the filming of the movie. I had a hard time believing that, but after all, this was someone from Lucasfilm. Regardless, I was able to scrounge some money together and made a cash offer to the antique shop owners for the prop, but they still wanted more.

It sold a few weeks later to the owner of a country and western music show called appropriately enough, Star World and was used as a decorative center piece for the theater’s lobby. I had just missed a once in a life time chance to own the Death Star. (At least that's what I thought.) 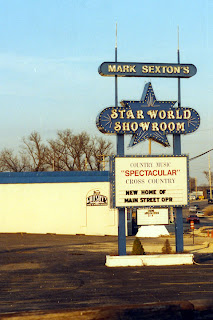 A few years later in a college film class, I had the opportunity to visit with Marc Thorpe who was a model maker from ILM and a guest speaker for our class that day. Marc didn’t work on Star Wars, but was hired to work on The Empire Strikes Back. I told him about finding the Death Star and that I was told that it was destroyed in the filming of the movie. He told me that he thought the model I had found was the real special effects model used for the movie and the information I had received was incorrect.

Fast forward to 1994, where I was visiting with my brother Pat and our friend Tim Williams at the kitchen (round) table. I told them I was thinking about contacting the owner of Star World to see if he would be interested in selling the Death Star, since the theater had just closed for business.

They helped convince me to make the call, when they agreed to split the cost three ways if he decided to sell it. I called the theater owner and sure enough he wanted to sell and we agreed on a price right there over the phone.

The next morning, Dad and I picked up the Death Star. I wondered what people thought as we drove down the highway with the ultimate battle station strapped in the back of a pickup truck. Good thing dad owned a black truck to go along with the whole Empire theme!

The second week of February in 1994 was an amazing time for me as I had just got engaged to a wonderful girl and became co-owner of one the most important props in movie history! 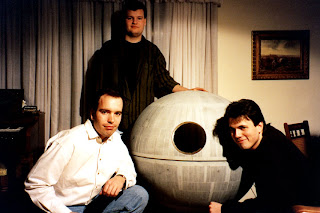 Be sure to tune in tomorrow for Episode II - The Death Star Lives Inside My Parents House.
Posted by Mayor Todd Franklin at 12:46 PM

Forget the Death Star. The most impressive artifact in that picture is on top of Pat's head!! That hasn't been seen in a while. Great post!

Wow. What a find.

I don't know how you're going to top this during the countdown.

Is this the same Death Star that Gus Lopez now owns? I ask because I notice the lack of the laser cannon dish in the final photo, and read an article where he mentioned that the one he has had a stereo speaker replacing the cannon dish.

That, sir, is pretty damn nifty. It's funny how blasie production companies are with their props. You think they'd realize that there are plenty of people who would be willing to pay for this stuff. I know some studios are dumping lots on eBay now, but still.

Mike - Ooh, Pat's gonna get you for that!

John - No I won't be able to top this and it's all down hill from here. I almost started out with these posts and then decided it should show up in the middle, just out of the blue.

Yes, we sold it the prop to Gus and he will be doing a guest post on the 16th.

Smurf - You're right. It's so hard to keep track of everything and especially then, before anyone knew of the importance of pieces like this one.

Hey I'm looking for a Tim Williams that I had a fun email correspondence several years ago....we loved all things 60s/70s pop culture and I swear he sent me a pic once of himself in front of the Deathstar...I thought it was a prank~! Tell him Melissa Britton in AR is looking for him on FB. Mention Bruce Campbell...maybe that will jog his memory. Thanks!

Hi Melissa! I just talked to Tim and of course he remembers you and is looking forward to hearing from you! Click on my profile for my email address and email me a message. I will forward it to Tim. If searching through the hundreds of Tim Williams on Facebook, he'll be the one dressed as a pirate.