“Howdy Pardners! To start the day right you need the right kind of breakfast. So here’s one breakfast that fills the bill.
First. You get yourself a bowl, fill it with Waffelos cereal, and pour on some milk.
Second. Have some fruit or juice.
Third. Try a little warm toast with butter or margarine.
Fourth. Wash it all down with a glass of milk.
My horse reminded me to tell you that Waffelos with 1/2-cup of milk give you 25% of the recommended daily allowance of 8 essential vitamins plus iron.
There’s a lot more to Waffelos than great Taste!”
Waffelo Bill 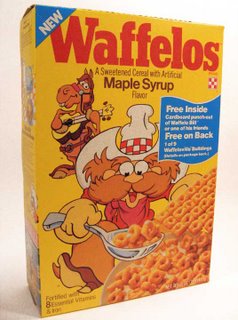 This good advise from the one and only Waffelo Bill was found on the side of each cereal box of Waffelos. 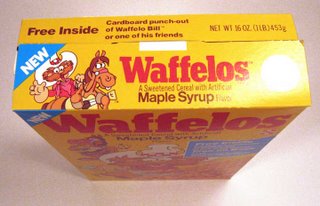 Introduced in 1979 by Ralston, this cereal was mighty tasty and a real hoot to boot! Waffelos came in two flavors Maple or Blueberry. Waffelo Bill rode into the sunset with his guitar playing horse in 1982, but luckily he left behind some nifty premiums.

Reminiscent to the 1948 Lone Ranger Frontier Town cut-out buildings on the backs of Cheerios boxes was Waffelos own version called Waffeloville. (You know, that’s just down the road from Neato Coolville) 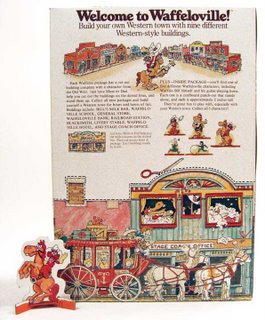 You had the opportunity to collect all nine buildings off of the backs of Waffelos cereal. To have the complete town you needed Bill’s Milk Bar, Waffeloville School, General Store, Waffeloville Bank, Railroad Station, Blacksmith, Livery Stable, Waffeloville Hotel, and the Stage Coach Office. 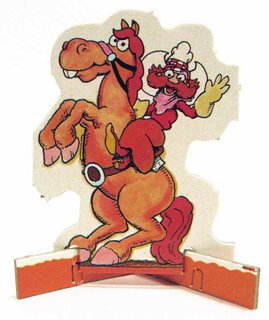 Also as a bonus, each box came with one of five Waffeloville stand-up characters! 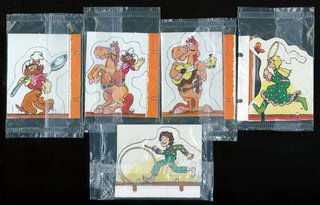 Some of the other premiums that were made available was a maze game, a belt buckle, Wacky Packages stickers, and two Wacky Packages posters (box panels). You can see those and a scan of the Blueberry Waffelos box over at Wacky-Packages

Also there were these three glass decals for drinking glasses, windows or mirrors.

Now I think I’ll go an fix me up some waffles then break off the squares into a bowl, pour in some maple syrup and milk and relive a childhood memory.

Hmm... You know that sounds like a bad idea. I’ll just go buy some of that new Eggo cereal instead.
Posted by Mayor Todd Franklin at 5:51 PM

Great post, Todd! (I was recently thinking about doing a Waffelos post too). I've been a fan of Waffelo Bill for a while, but I had NEVER seen the Waffeloville town sets and stand-up figures! Other Waffelo premiums: a patch and a light switch sticker.

Thanks! I hope you do your Waffelos post too! I haven't seen the patch and light switch sticker!

Ooooh. I loved Waffleos. Consumerist.com was talking about brands that should come back, and I immediately thought of Waffleos.

I sure did love Waffelos cereal back in the early 80s. They had a promotion for a Bachmann Old West Overland Freight HO scale train set which I received for my birthday in either 81 or 82. I still have that set.