1982 TELEVISION EVENT REVENGE OF THE CREATURE IN 3-D

During the summer of 1982, the first 3-D broadcast was syndicated across the country making television history. The movie was The Revenge of the Creature, the sequel to Creature from the Black Lagoon. This monumental event was sponsored by local convenience stores and fast food restaurants. Buy a big gulp or a medium pizza and get a pair of 3-D glasses. Then watch the excitement in your own home on your television set! I remember we got our glasses at Pizza Hut when we first learned about the promotion. For myself, I was pretty excited as I’d never seen a 3-D movie before and the closest thing was staring at a 3-D poster out of Dynamite magazine that hung on my bedroom wall. My brother and I stayed up after the local news and watched the demonstration so we would know exactly how to use our 3-D glasses. 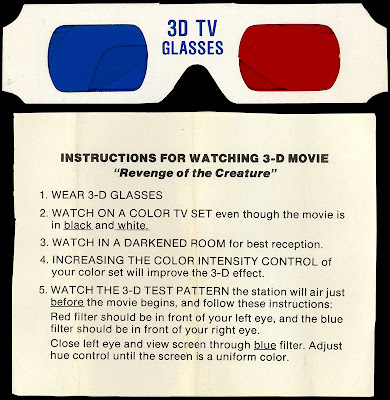 The glasses also came with instructions.

Just before this major television event, I had just turned twelve years old. I didn't care that I was witnessing groundbreaking TV, I just wanted the Creature to look as if he was jumping out of my Zenith. Ug, the 3D didn't work too well and we were kind of bored and sleepy. Really it was a struggle just trying to stay awake.

Here’s my small collection of some of the different 3-D glasses that were given out. 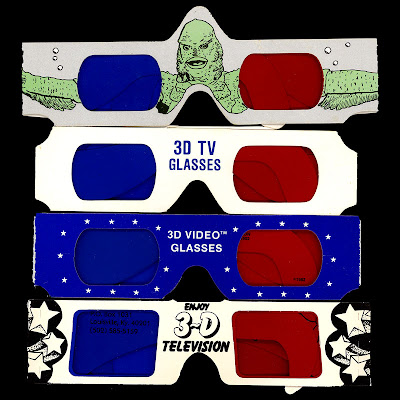 Follow this link for a cool 3D Revenge of the Creature ad in Pittsburgh. Be sure to scroll down to the middle of the page to view it.

I probably would have enjoyed it more if our local channel did something like they did in Chicago with the Son of Svengoolie entertaining the home audience during commercial breaks. Check out these fun clips of Son of Svengoolie presenting this historical TV event! (Uploaded by fuzzymemories).

First click here for a snippet of the local news that aired before "The 3-D Movie!"

Now for some of the promos -

And now for the big 3-D event, The Revenge of the Creature!

From KTXL in Sacramento, here's some promos for the 3-D Revenge of the Creature. Uploaded to YouTube by KTXL77.

One last item! Click here for a cool Farmers Jack ad for Revenge of the Creature 3-D glasses.
Posted by Mayor Todd Franklin at 1:10 AM

Oh my God, Todd, we are right aroud the same age and have had the same experiences. I'd forgotten all about the big hooha that summer, but you brought it all back.

Not to mention that up till then, my only 3-D experience had been with that poster in Dynamite magazine! It was the ... Dynamite Duo? Their superhero twosome, a guy and a girl. It hung on my bedroom closet forever.

What a classic moment...or treat for that matter to remember. Thanks so for the memories..and one of the most interesting and entertaining blogs I've ever encountered. Happy Halloween to you my friend.

Dane - That's one of the 3-D posters I had along with a horse poster. Of course the horse poster didn't stay on my wall too long.

Anonymous - Thanks for the nice comment and glad you're enjoying the blog! Happy Halloween!

our local station, WDCA 20, had this promotion in the 80's as well. my friend and i went to the local 7-11 the night of, and they were sold out. sucked. we watched the 3d movie without the glasses anyways.

Fantastic post! We were talking about this very event a few weeks ago at work. I watched this in Oklahoma City when I was about 7 years old. 7-11 was giving out the glasses with a purchase. If I remember correctly, the local station airing these did a whole week of 3-D movies, one per night.

Fantastic, this was one of the first Universal monster movies I ever saw as a kid. I remember getting my glasses at Burger King, I remember you could also get them from Photo-mat.

I watched it on Philly station 17 or 48,not sure which one it was I can't remember if Svenghoolie hosted it, but I remember Svengoolie beheading a Kojack doll??

Curious about the Dynamite poster... was it by any chance a poster of Dracula standing in a graveyard? I had that poster as a kid and I'm trying to track it down.

The problem was that it was a huge let-down. All the hype leading up to it, was a sales cyclone for those stores, but for the consumer, the result was a less-than entertaining failure of tv. At least we got the glasses to keep and wear to school.