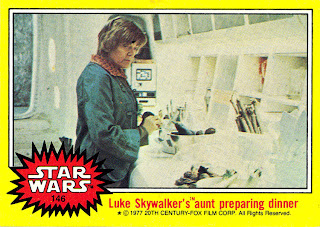 If I had to pick out the top 30 Star Wars cards when I was seven, this card would not have made the cut. But now this card just makes me chuckle and deserves to be in the top 30.

I doubt that many kids coveted this card for their collection and I’m certain in the history of kids trading bubble gum cards this one was probably never traded.

Of course, if it was signed by Shelagh Fraser, then we’d be talking trade!
Posted by Mayor Todd Franklin at 9:49 AM

They should have made a card highlighting the fantastic Tupperware the Lars family used.

Stephen - That's great! I'm only missing three autographs from the main cast and I'm afraid she's one of them. Yeah, my cards got kind beat up too since I was always flipping thru 'em, taking them to school etc.

Mike - That would've been great! Now I'm thirsty for some blue milk!

aunt beru could mince the bok choy like nobody's business...

did any of you ever do this - ? put food coloring in your milk so it looked like star wars drink? dang.

Hey, Todd, who else are you missing? Maybe I can help. I do have a letter from Ms. Fraser that I was about to put on ebay to help pay for Celebration 4/Comic-Con this summer. If you're interested, let me know and we can talk. I also have a card that I had Ms. Fraser and Phil Brown both sign, but I'm afraid I'm not crazy enough to part with that...

http://www.geocities.com/karloff3/home.htm
(I haven't updated this site in years and have lots more)

Johnny - Ah, no I never did that, but I'm impressed that you did!

Stephen - Wow, have an amazing collection! Besides Fraser, I'm missing Ford and Cushing. The letter sounds interesting. Send me an email about the details. Thanks!!