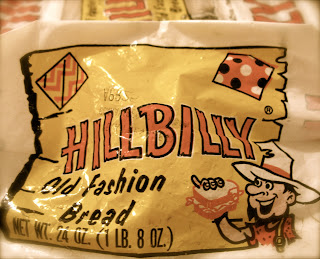 How’s all the Neato Readers gettin‘ along today? I can rightly say I’m pleased as PB&J, ‘cause I get to talk about a beloved bread from my childhood.

For years I’ve been searching for a vintage Hillbilly Bread bag, but for some reason it kept evading me. Finally, just the other day (thanks to my pal Waffle Whiffer for the heads-up), one showed up on ebay and I won the auction! So here’s an item that’s been high on my vintage packaging want list for a long time.

Back when I was a kid, you could probably find a loaf of one of these four brands in our kitchen pantry - Roman Meal, Wonder Bread, Ozark Mill or Hillbilly Bread. For a kid (that’s me) growing up in an Ozark tourist town with every sign sporting a hillbilly, Hillbilly Bread was a perfect fit for our local grocery store. The bag has always had that happy image of a hillbilly enjoying a sandwich. I wonder if the carefree hillbilly has a name? Also, I would love to know who the artist was who designed the hillbilly. Hillbilly Bread is still available, but is regional and I haven't found any yet.

I’ve been trying to do some fast research on the origins of Hillbilly Bread, but there doesn’t seem to be much online. For now we'll just enjoy some Hillbilly Bread artifacts starting with these nifty commercials from the 1950's. (Video uploaded to YouTube by jacky9br.)


The next item is a fun 1960's(?) photograph from The Rozell Show hosted by Rozell Fabiani on WRBL in Columbus, Georgia. Two unidentified hillbillies and Rozell are doing their best to promote Hillbilly Bread. 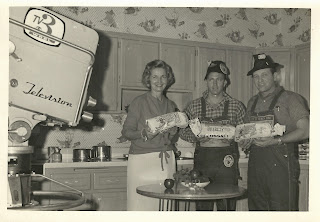 Click on the photo and you'll notice the hillbillies are wearing oversized buttons that says, “It’s Colossal." I have on of those buttons, but I can't find it. I do have one of the felt blocks that’s sewed to the guys overalls. It's hard to see in the photograph since they're covering it with the bread loaves. 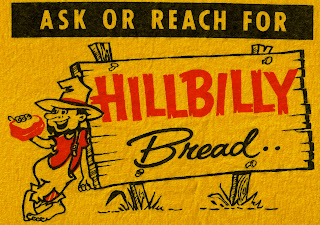 According to this website, an innovative man by the name of William Busse, the owner of Kreamo Bread, had a brilliant promotional idea during a Notre Dame football game. He parachuted miniature loaves of bread from an airplane. Here’s the blurb from the website where Hillbilly Bread is mentioned - “During the depression he ran continuous ads announcing a Hobo Convention was coming to town soon. It caused quite a stir. When the appointed day arrived all his Kreamo drivers appeared at grocery stores dressed like Hobos. Their trucks had banners announcing “Hillbilly Bread” a new bread Kreamo was introducing.” Apparently he continued this advertising practice for many years after. I wonder if this is the same Hillbilly Bread as the one we’re talking about today. If so, here’s a miniature bread bag of Hillbilly Bread. 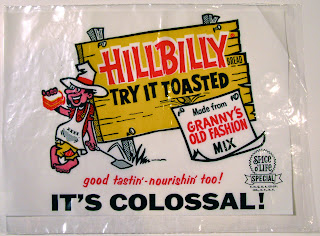 This bag is probably from the 1960’s and who knows, maybe it was parachuted from a plane.

Next up is this stylish Hillbilly Bread vest. 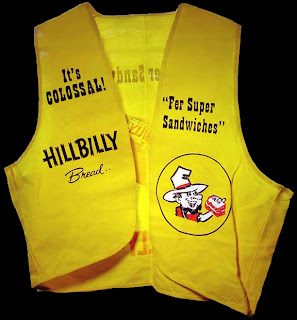 My guess it was worn by a grocery store clerk or bag boy. For some odd reason, the first lady won’t let me wear this around town. Hmm... I wonder why? 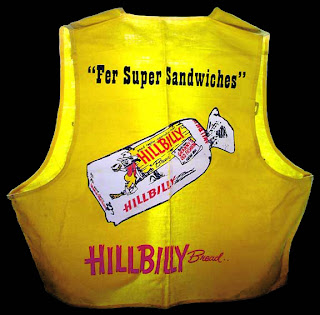 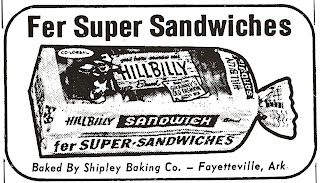 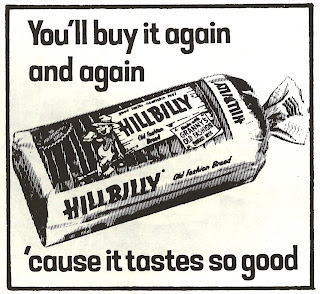 I don't remember ever seeing Hillbilly Tater Bread. But here's an old unused bag. We finally get to see Granny! Her old fashion bread mix is what Hillbilly Bread is made from. 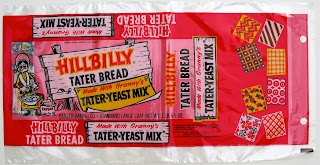 Ok, now that I'm done with my Hillbilly Bread blog post, I'm off to frame my bread bag and hang it over the the dinning room table. Shh... don't tell the first lady.
Posted by Mayor Todd Franklin at 12:36 PM

Awesome! I totally don't remember Hillbilly Bread though I do remember those yellow vests for some reason?!

I remember Hillbilly Bread fer sure! Thanks for the memories.

This is such a thorough examination of Hillbilly Bread...you should be a college professor, you could teach Retro 101. :) Wouldn't that be awesome? lol

You can wear that cool vest around my house anytime NC!

Best I remember, it only came in brown/wheat. I didn't know about the Tater variety.

In the words of Tim Hollis, author and Southern pop culture expert (Birmingham, AL division--check out
www.birminghamrewound.com), Hillbilly Bread tastes better "effen you eat it with yore shoes off".

Awesome stuff, This would be perfect photo!!Great work done!!