Forget the modern safe and secure car child seats. Back in the day, kids were just strapped down in the front seat if they were strapped down at all. I scanned a bunch of mag ads last year and just ran across this fun 1963 ad for Irwin Auto Safety Harness. This ad has a lot going for it. 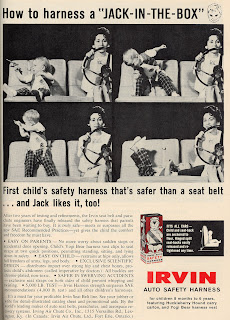 Nice to know that the Irwin Auto Safety Harness was designed by parachute engineers. That’s great if you accidently drive off a cliff!

Just look how carefree mom is. Her child can easily jump around and play in the front seat while the car is blazing down the freeway. Look, this kid is having the time of his life with his trusty six-shooter. He’s probably taking aim at the police car behind them. 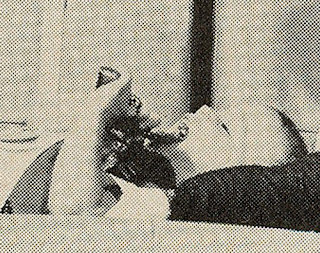 Hey kid, didn’t your mom tell you never to stick a gun in your mouth?

The ad says, it has an Exclusive Scientific Design. Well, I don’t know about that, but I like the swell Hanna-Barbera box. Nice that Irwin offered a choice of character - Yogi or Huckleberry. I wonder which one I would’ve picked if I was a kid during the 1960's? Hmm... team Huckleberry all the way! 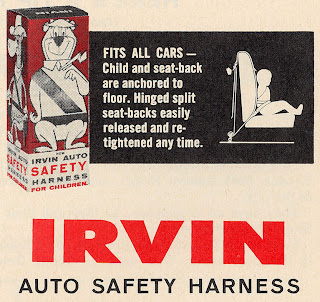 Posted by Mayor Todd Franklin at 1:24 AM

Fantastic! I love your animated gif, too!

Awesome! Thanks for sharing =)

I love these early attempts at child safety restraints. I think most of them were more dangerous than just leaving your kid to wander around the car completely unattached. The ad text should read "...restrains at hips only, allows full freedom for child's head to smack into dash in the event of a frontal collision."