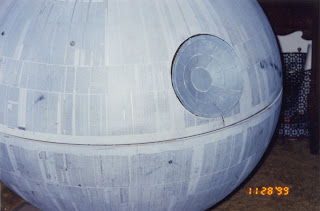 The first night as the new owners of the Death Star, all three of us just sat there in a daze and just stared at it. The realization was setting in that we just rescued one of the most important movie artifacts of our generation.

Originally, when I first found it back in 1988, it still had the dish (superlaser) intact and when I went to buy it from the theater owner, the dish was missing. He told me that it was accidently thrown away by one of his employees. I felt terrible that it was gone, especially when I had the chance to buy it the first time.

It was unfortunate that the dish was missing, but my resourceful and talented grandma, made one out of paper plates and cardboard. It actually looked good and filled in the hole until one was professionally made.

We examined the model closely, hoping to find something that would verify that this was the real model. We could instantly tell that it was professionally made, as the detail and sturdy construction was top notch. The surface was painstakingly hand painted (by the legendary Ralph McQuarrie) over the three-foot plexiglass (two-part) sphere and thousands of tiny windows were scratched into the paint. 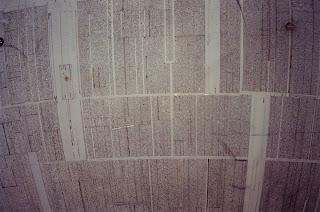 On the unpainted bottom half of the sphere was an open hole and we discovered when a light source was inserted, all of the little windows glowed and an amazing city scape appeared. At times we would sit in the dark with the Star Wars soundtrack playing and the Death Star illuminated and just admire the beautiful craftsmanship. It was really something! 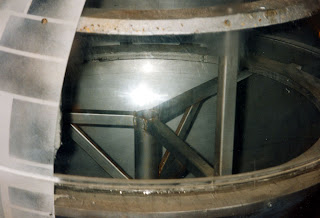 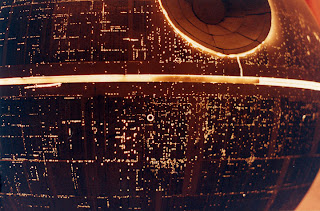 All three of us came under the realization that we wouldn’t be able to keep it. We didn’t want to end up like Bart and his friends, when they pooled their money together and bought a rare comic book in a Simpson’s episode. The comic book was destroyed in the end. 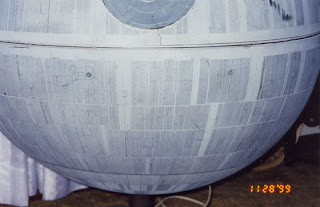 Since we had to sell it, we wanted Lucas to have the first chance. Once again, I was talking to Lucasfilm and by this time they agreed that the Death Star was in fact the real prop. I had some great conversations with ILM wizard Don Bies, who was then working as Lucasfilm’s archivist. Also, I found some much needed advice and information from Stephen Sansweet. We wanted Lucasfilm to make an offer for the Death Star, which they did. Their offer was a tour of the ranch and autograph photos from Lucas. Since we were all Star Wars fans and I was a Star Wars collector, this was a dream opportunity, but we also realized the financial potential of the prop and the opportunity to help better our lives. So naturally we had to pass on that offer. They put the ball in our court and asked us to come up with a selling price. This was no easy task, as there wasn’t very many examples of Star Wars props sold on the collector’s market, especially of the magnitude and importance of this one. We based our price on current auction prices of props from other high profile movies and presented Lucasfilm with a fair selling price. I was told that Lucas decided to pass on the price and wasn't interested in the purchase of the Death Star. We were surprised that they didn’t counter offer and truthfully I was crushed as I thought I was doing the right thing. We were hoping to help ourselves financially and return something back to the rightful owner, whom I had idolized during my youth.

Afterwards, I was talking with potential buyers that included Stephen Sansweet, Planet Hollywood and a Japanese collector. We also looked into auctioning it off with one of the national auction houses.

Eventually, these talks faded away and since we didn’t have any written proof of authenticity, it looked like we were going to keep it. That was fine with me, as I had hoped that someday I would be able to buy out Pat and Tim’s part of the Death Star and keep it. This was not to be, as Tim, who was the first of us to hook up with that new thing called the internet, came across the The Star Wars Collector's Archive website that was created and maintained by super Star Wars collector, Gus Lopez.

Afer getting to know Gus, we realized that he should be the new owner of the Death Star. Besides being a swell guy, Gus has a high level passion for Star Wars and we knew the Death Star would get much more exposure with him than being stuck in my parents living room here in Missouri. 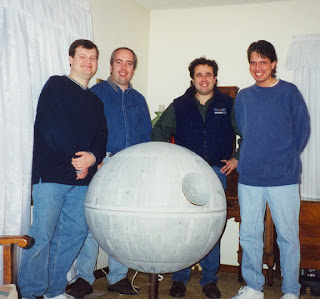 From left to right: Todd, Pat, Gus Lopez and Tim

It was very hard for us to let it go and even though the experience was sometimes bittersweet we are still full of pride that we saved the Death Star. We will always own that notion! 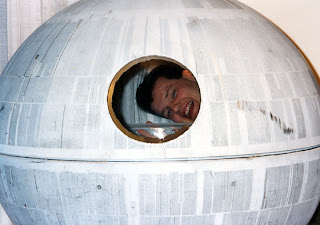 Tune in tomorrow for Episdoe III - The Death Star's Keeper, as Gus Lopez talks about his experiences with the Death Star and where the Death Star is today!
Posted by Mayor Todd Franklin at 12:18 PM

Man this is such a great story. It must be nice to have an ace like that up your sleeve when mingling and stuff.

Thank you for a great story. I can't wait to find out what happens in Episode III.

Wow, it is unbelievable when lit up.

Smurf - I bring it up sometimes if the subject turns to Star Wars collecting.

Erick - Glad to share the story. Now you can read the complete trilogy of posts thanks to Gus.