A popular mid-century tourist attraction was the roadside zoo or animal park. The Lake of the Ozarks region in Missouri didn’t escape the “monkey see - monkey do” fad of ma and pa roadside zoos. The Lake area had its share of animal parks and one of the more popular and successful zoos was Max Allen’s Zoological Gardens.

Just a few miles south of Eldon - Max Allen’s Zoological Gardens was a very popular tourist attraction and was usually the first stop for most Highway 54 travelers that were spending their vacation at the Lake of the Ozarks. This herpetologist’s dream spot opened in 1951 as the Ozark Reptile Gardens in a large rock building. 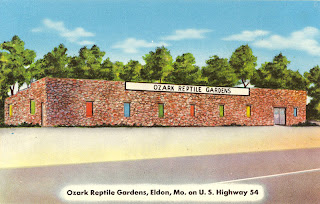 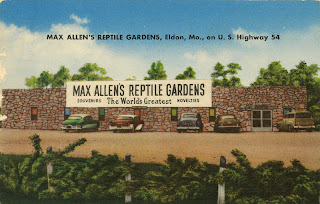 The name would eventually be changed to Max Allen’s Zoological Gardens named after the owner’s son, Max Allen Nickerson. (Max grew up to become an accomplished herpetologist and author.)

The owners were the founders of Nickerson Farms. The popular chain of roadside restaurants with the familiar A-frame red roofed building. 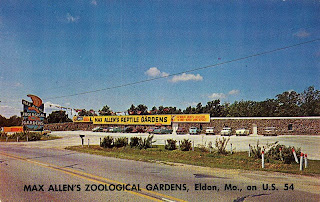 A wide-eyed kid or a squeamish mom could view more than 300 different varieties of snakes and lizards. One of the main attractions was to see the Galapagos Turtles. Children were given the opportunity to ride these giant turtles and the most popular turtle was George. George was kind of the unofficial mascot of the zoo. Besides the reptiles, Max Allens also had seals, exotic birds, and monkeys.

Every month one lucky tourist got to take home the ultimate souvenir in the form of a friendly monkey. That’s right, there was a drawing every month for a monkey and here’s the proof on the back of this postcard. 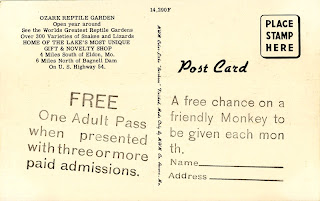 I haven’t heard if this was a real monkey or if the winner was awarded a little monkey statue. I have a feeling it was a real monkey, since this was during the same time you could order live monkeys out of comic book ads.

Check out this old 1960's amateur film of a family’s trip to the Lake of the Ozarks. The beginning features Max Allens!

I’m not sure when Max Allen’s closed its doors, but I believe it might’ve been in the mid-1970's after they moved to a different location.

The rock building still exists, but nature is reclaiming the property. It looks more like a home for Sleestaks than a once popular roadside attraction. I just snapped these photos last week. 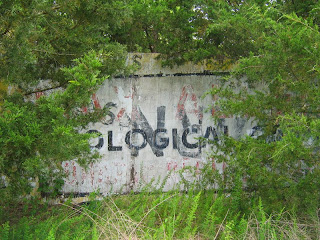 The sign that was originally on the front of the building has been reassembled as a makeshift wall. 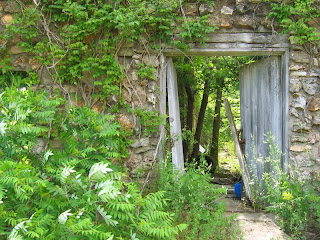 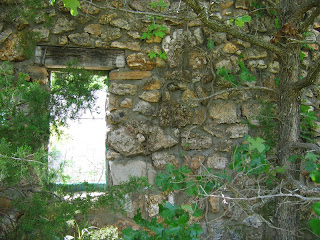 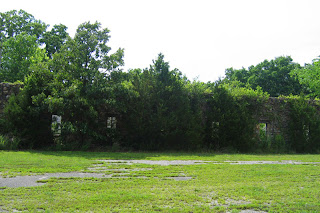 At one time this building was full of life from the animal kingdom to the tourist kingdom and now it’s like something from the History Channel’s new TV show Life After People.

If you have any memories of this classic Lake of the Ozarks attraction, be sure to leave a comment.
Posted by Mayor Todd Franklin at 8:54 AM

This was by that restaurant we went to with my dad last year, wasn't it?

I lived in Lebanon, about an hour due south of Eldon, and drove through Eldon a few times. We stopped there for lunch one day on my birthday, probably in about 1978, and I remember it because I had spaghetti and a chocolate milkshake. Thirty years later and I'm still grossed out. Anyhow, I have some very vague memory of being told that there had been a lizard-based tourist stop, although I cannot remember if it was still open then or not.

You're right, the area did have a lot of those little animal-based tourist stops. I wish we'd stopped at some of them.

It might've been good thing that Max Allen's was closed because the animal smells along with your chocolate milkshake and spaghetti probably would've been a bad combo for a kid.

The zoo moved to just West of the interstate in the 70's. We visited that zoo every year as late as 1984, I believe. Sometime in the 90's it became a Cowboy western wear shop.

If my memory serves me correctly they even had a TV show sort of like "Mutual of Omaha's Wild Kindgdom" I am originally from Fulton MO and ran down 54 to the Lake of the Ozarks many times when I was a kid and we always had to stop at Max Allen's place...Lots of signs advertising his attraction along the highway.. kind of like the old "Burma Shave" signs. Kind of sad to see how it ended up... Charles McAtee

Thanks so much for this site! I was just telling my husband's family this afternoon about how the turtle I was riding at Max Allen's pinned me into a corner and squashed my leg next to the wall. Truly a unique memory. Kinda sorry my kids won't have the same opportunity, though.

I worked at Max Allen's for 5 summers, cleaning cages and giving tours. Mrs. Nickerson agreed to hire me for 50 cents an hour when I was 15 years old.
George, the Galapagos turtle, was blind and loved heads of lettuce. Max Allen's was also home to a baby elephant, named Jody.
Those little monkeys Squirrel Monkeys and were sold for $29.95. They were rough to catch and were not the least bit friendly!
I'll never forget those days at Max Allen's. It's sad to see the old rock building so grown up.

I went here a few times as a child on field trips.There was an old military surplus store right up the road called Becos I would go to all the time.I heard that the zoo caught fire at one time and that was why they moved it.I went inside the old one a few years ago and got some pics(they're on flicker now)and the newer location is indeed a cowboy apparel store.

Numerous trips a year spent there. Had the large tortoises you could ride around their compound on.
Indeed, Max had a show on Chan 13 KRCG in the afterschool slot for the kids.
Nearly lost him when he got bit by a black mamba, they had to fly the antidote from St.Louis.
Shame people don't get their kids into such things now. Conditions weren't up to today's standards, but the animals were well kept.

any idea who owns this property now???

The "cowboy apparel " shop is now an auction house. My parents owned property close by, the old zoo was still open and occupied both places, when they closed in 1985 or 9 (when i moved here for good) the peacocks ran wild and ended up on our property for the summer.

I still have nightmares about this place. When I was in early elementary school in Osage Beach this was the place du'jour to take out of town guests to. I think it was it being so dark in the main room with just the cages/tanks lit that got me down and that crocodile and the gators didn't help either. I was so glad to see that I am not the only one who remembers.

Bamboo Lemur Boys Are Mean To Their Girls said...

My father used to manage Max Allen's in the early 70's. I was about 2-3 yrs old at the time. We lived on the property. My father used to feed fish to the alligators by hand for the visitors. I used to ride the Galapagos turtles. I'm glad I can say I used to live in a zoo as a child. :) It's nice to see pictures of it as I don't remember what it looked like from the outside. Thank you.
Robin

It's really cool to hear that you lived there as a child about the time I would have also been there. It was a fascinating place but I once got separated from the big people when I was about six years old and went to the place where they were keeping the croc and a group of big other people pushed me up against the mesh enclosure and I freaked out; hence the nightmares I still have. I was never nervy enough to ride the big turtles because their pen was too close to the gators as I recall. I would give anything to have a bumpersticker or some other kind of souvenier from there because it is such a rich memory. It was a really cool place;albeit it has kept me away from the Chattanooga Aquarium because it has dark floors and dark lighting like Max Allen's ZG did and I think that is what freaked me out so badly. I try to keep it in perspective and recall how much Santa scared me that same year at the HoJo in Osage Beach.

I still remember when Max was bitten by a Black Momba and the antidote had to be flown in. Max used to brag his blood was used to make antiserum for rattlesnake bites. Do I remember correctly that he finally died from a snake bite?

Ed McDaniel was the one bit buy the Black Mamba and survived making him only the 5th man ever to survive it's bite.

I visited Max Allen's several times a kid. 1st time was a field trip with my 3rd grade class from Linn Creek School back in 1963 I believe. This site brought back many memories. I fed old George lettuce and joined other kids riding him. I heard the stories about the Black Momba and the man's blood being available to be used used as an anti-venom. I always hoped the post cards I always filled out would get me a monkee. I volunteered to throw a chicken or rabbit into the python's cage which was a scary job to do since the "cell door" as I remember was held open just for a moment so the 26 ft. snake would not escape. I asked one time if I could buy George. As I said I was there several times over the years as we had a place on the Lake where we had many visitors. Louis Deig was the one who raised me and he owned Deig's Garage in Linn Creek where he had a fabrication shop and did welding also. He was a pioneer in the dock making business on the lake, helped erect the stands for the J-Bar-H Rodeo and knew almost everyone around the area. I became the assigned tour guide to take our visitors to all the attractions around the Lake which he recommended. My Uncle was Jim Morgan who owned the Lazy Days Resort back in those days he also borrowed me to serve as a guide for his guests occasionally. A great place & time for me to be raised down there, even if I never did win a monkey like I hoped for.

Wasn't there a "Five-Legged Cow that was a big tourist draw for awhile?