If President Harry S. Truman were alive today, you might find him going for high score on Donkey Kong at the new Electric Theatre Vintage Arcade. Yep, the historic square in Independence, Missouri, the town that Harry made famous, is getting its first retro arcade. 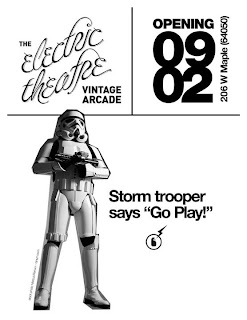 This is a dream come true for my pal Mike Freeland who’s been an arcade enthusiast and coin-op collector for over 15 years. I’ve known Mike for at least that many years and he’s always talked about opening an arcade to house his collection of coin-ops. Mike already knows a bit about riding the entrepreneurial merry-go-round as he owns Freeland Photography, a successful photography business in Kansas City. So he’s familiar with the ups and downs of starting a business. Attempting to open a vintage arcade has been just that - full of ups and downs. Really, Mike’s journey has been similar to some of the 8-Bit characters that live in the video games of his collection. Filled with zaps, crashes and new lives! Last year, Ken and Cindy McClain, Independence Square preservationists and business owners, inserted a token into the arcade dream. They own Square Pizza and decided this would be a great temporary location for the arcade. If everything goes as planned, eventually the arcade will move into the old Plaza Theatre building, hence the name Electric Theatre Vintage Arcade. (The name is actually a double homage. First to the old Electric Theatre that used to be located on the square and second to Mike's childhood arcade on the square, the Electric Company Arcade.) I’ve seen some of the plans and designs for this building and when it happens, it should be one of the premier retro arcades in the country.

Apparently, every step of creating the Electric Theatre Arcade is being recorded for a possible documentary. Check out this video.

Ok, enough of the talk ‘cause the only thing we care about is playing some classic vids!

Visit the Electric Theatre Vintage Arcade at Square Pizza September 2nd-5th during the Santa-Cali-Gon Days Festival to play 40 classic arcade games! No quarters or tokens needed as the games will be set on free play. A five dollar admission at the door will be your golden ticket for unlimited play. That’s a bargain ‘cause you know you’d blow five bucks in five minutes just playing Defender. Also, you can pay $10 to come and go all day or $20 for the weekend. Hours for Friday will be Noon to 11 p.m., Saturday and Sunday 10 a.m -11 p.m. and Monday 10 a.m. - 5 p.m. The hours could change, so be sure to visit electrictheatrearcade.com or email info@electrictheatrearcade.com for more information. 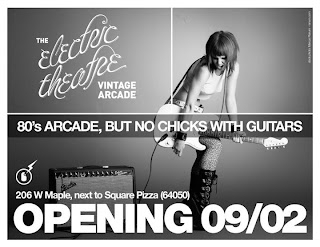 Spread the word because if there’s enough interest in the Electric Theatre Vintage Arcade then it will become a permanent place on the Independence Square. We all know that more old school arcades that exist is one step closer to world peace. You want world peace dontcha?

---Update---
Unfortunately the Electric Theatre Arcade was forced to close by the city of Independence. Hopefully things can be worked out and eventually the arcade will be back.

---Update---
The Electric Theatre Arcade will be open for four days during Labor Day weekend 2012!!
Posted by Mayor Todd Franklin at 5:43 PM

Email ThisBlogThis!Share to TwitterShare to FacebookShare to Pinterest
Labels: Check It Out, Vintage Video Games

Great post. I think it'll do great. It's going to be neat having an arcade on the Square again. It's been way too long.

Wow! I live close to the square! My daughter works at the coffee shop for the McClains. I remember the old arcade, my boys would frequent it..I also remember when Woolworths, Kresges and Katz drugs were up there!

I was there for awhile before the opening and enjoyed hanging out and being surrounded by classic games! Tony compiled a cd full of 80's music which was perfect for the atmosphere. Congrats to Mike Freeland for a job well done!

Wow, the mayor's brother has made an appearance. I think I might faint!

Wow, I've got to plan a visit. Funny that MO has two of the nation's best arcades now.

Incidentally, I hated seeing that green shag carpet being torn up in the video, I don't care how stinky it probably was. It was beautiful!