TASTE TESTING THE MONSTER CEREALS OF 2013 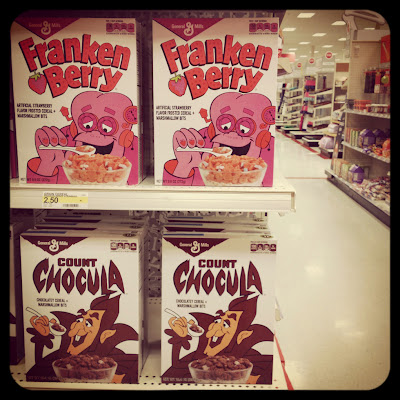 Fall of 2013 will always be remembered as the season of Monster Cereals! Cereal aficionados and monster fanatics were treated with the return of two dearly departed cereal mascots and a collection of retro boxes. Back in September, I thought I was dreaming when I walked into my local Target store and saw the display of retro Monster Cereals! 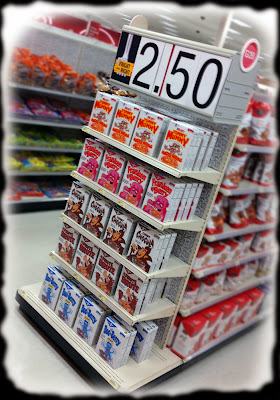 A few weeks earlier, I heard about Fruit Brute, (now spelled Frute Brute) and Fruity Yummy Mummy returning to cereal aisles in modern style boxes. Soon after that report, the news hit that retro boxes were coming to Target. The kids over at CerealBits.com have been hoping for retro monster cereal boxes for years, ever since Target started producing exclusive retro boxes for General Mills and Kellogg's. Here's the official announcement for the boxes on the General Mills blog. I posted about my Monster Cereals excitement on 9/7, but neglected to add a taste test to the post. Well...today is that day!

Really, does the taste of these cereals actually matter? Of course not! I'd buy these boxes if they were on the shelves empty. But none the less, I'll try my best to be a cereal critic. 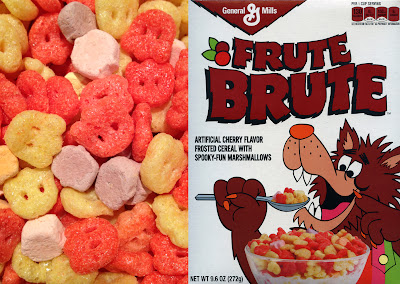 Back in the 1970s and 80s, Frute Brute used to be fruity and pretty much tasted like Trix, with marshmallow bits. Today, the werewolf with the technicolor overalls howls for a cherry flavored cereal. The first spoonful was just okay, but nothing too exciting. The cereal did get a little better as I finished the bowl, but overall, I'd probably skip buying Frute Brute if it was packaged as something else. (As you'll see below; this cereal really works better as a mix-in.) 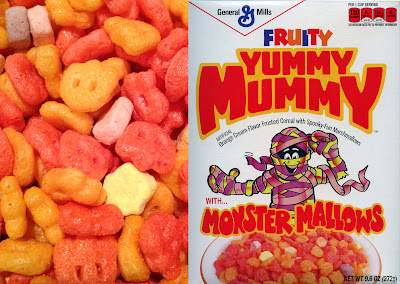 Even though I never tasted this back in the day, I understand that Fruity Yummy Mummy was pretty much the same as Fruit Brute. In 2013, the cereal is orange cream flavored. Oh yeah, this flavor works and tastes like an orange creamsicle. I found out it tastes even better when the milk is really really ice cold. I like the Frute Brute character better than FYM, but on taste alone, I'd pick this over Brute any day! 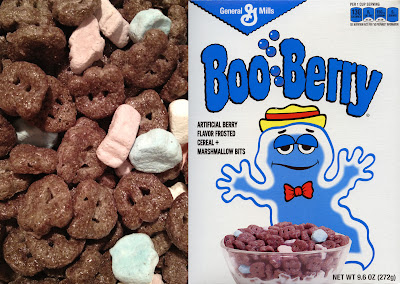 Boo Berry was always my favorite tasting monster cereal and I haven't had a bowl in years. I was anxious to try my favorite again. What the heck, Boo? You've changed. It's like I don't even know you anymore. Oh man, I hate to be critical, but Boo Berry has turned into Boo Berry Bland! Maybe this was a bad crop year for boo berries, but this cereal is missing that sweet Boo Berry pow flavor like before. 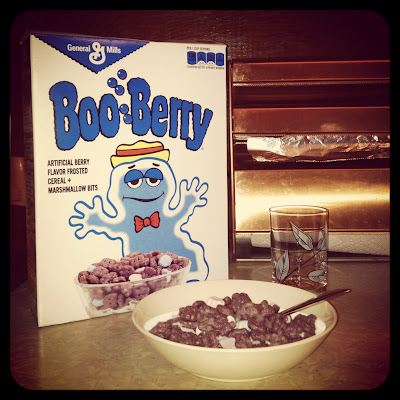 Boo did redeem himself a little bit when I gave him a second chance at my grandma's house. Retro Boo Berry does taste better in a kitchen that hasn't changed much since the 1970s. 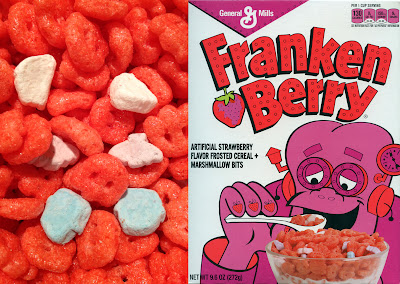 As a kid, I was always a fan of strawberry milk and Franken Berry was the best of both worlds. This modern version of the cereal is okay, but like Boo it seems to be missing something. I guess as a 70s & 80s kid, I require more sugar. Frank just isn't as sweet as he used to be. 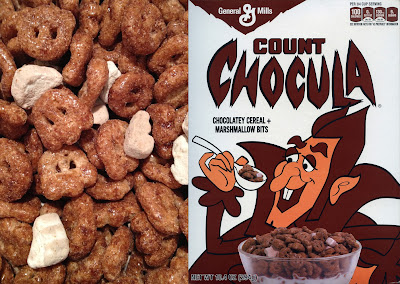 Ah, Count Chocula; the go to chocolate cereal. Always in my opinion the perfect chocolate cereal. Hmm...not so much anymore. I will need to compare it to some of the other chocolate cereals out there, but the good Count just didn't seem to be as chocolaty as before. Ooh...I know how to fix that! Pour some chocolate milk on it! 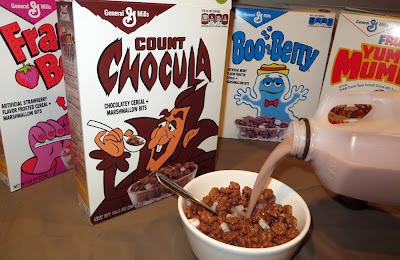 Yep, that's the ticket! Mmm...now Count Chocula tastes almost like it did back in the day! (I should have done the same thing with Franken Berry and poured on strawberry milk.) 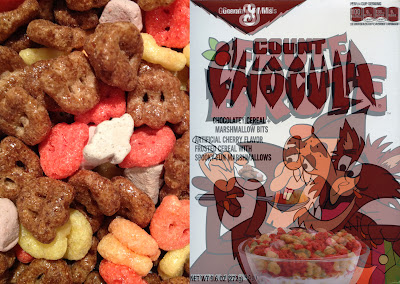 Now here's a discovery that works well and that's mixing Frute Brute and Count Chocula in a bowl. If you like chocolate covered cherries then this is a fun option that's actually really tasty. Ooh! Maybe General Mills can invent a new character for a new cereal. How 'bout a Dr. Jekyll and Mr. Hyde character for a cherry chocolate flavored cereal? 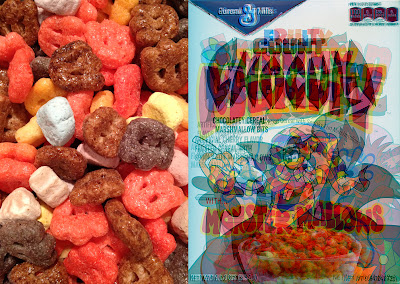 Apparently I went all mad scientist for my last monster cereal taste test when I mixed all five cereals in a bowl. Not bad, not bad at all. Not sure why, but I could taste the flavors even more. As a bonus, the milk was kind of gross looking, so that was fun.

Overall, I've come to the conclusion that you just can't go back and that these cereals are best left for the kids of this era. (The kids can enjoy the cereal and us big kids at heart can enjoy the nostalgic boxes.) 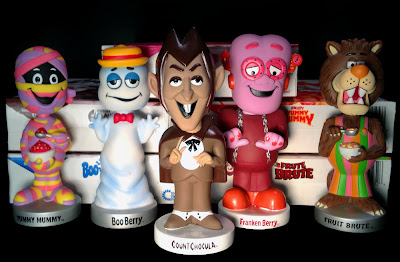 Once again, a Big G thanks to General Mills for keeping these fun characters alive for new and old generations! Oh, and one more thing. Could you please add more marshmallow bits to the cereal. Thank you! That is all.

i didn't know that the retro boxes were available at target! (that's what i get for not reading this blog, i assume). i picked up a box of count chocula at my local supermarket in the disappointingly new box (SIGH!), and i have to report that i was completely surprised at how NON-chocolatey and sweet it is. it's ok-tasting, but... meh. gimme cap'n crunch, any flavor, any day. i do wish i had been able to find fruit brute (original spelling forever!), but maybe another time.

me again -- i meant to say "NON-chocolatey and NON-sweet"

Whew--glad it wasn't just me, because didn't really get much out of Frute Brute. I expected more cherryishness.

But Yummy Mummy? That was ridiculously great. Beat FB silly in the taste department.

It's hard to get back the experience of childhood favs. Our tastes change, not just in terms of preferences, but, as we age, our taste buds just aren't as sensitive. Remember how you felt about the taste of olives as a kid? I hated them. Love them now tho!

Frankenberry was my fav.

It's obvious that sugary products like this aren't what they used to be.I recently tried a vanilla flavored"Scooby Doo" cereal in the hopes of a match for Cap'n Crunch's Vanilly Crunch.No such luck.I know a lot of pundits say less sugar is for the better but,hey,I'm almost half a century old and I'm in perfect health despite partaking of not so healthy foods now and then.My secret was MODERATION.did you notice another new ingredient?AIR.Way to give me less for my money,Corporate America.

Boo Berry was always my favorite, but I am growing to like Count Chocula a lot!

I was pretty underwhelmed by Frute Brute too.

I agree, they all taste a little "light" or bland, for whatever reason. They need to amp up the monster flavors already!