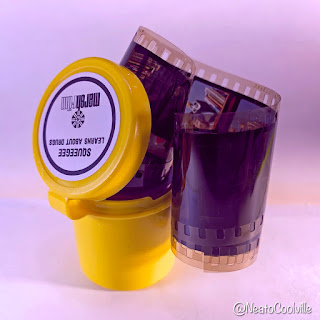 Ah, the memories of filmstrips.  Any school kid from the 1960's to the early 1980's will remember sitting in a dark classroom watching a continuous slow scroll of images.  The images were paired with mono audio and those famous beep tones.  The beep signaled the teacher to advance the strip to the next image.  If you were a lucky kid or a teacher's pet you might've been chosen for this highly important and crucial job.  Today, I present an opportunity for you to go back in time and experience one of these classic filmstrips complete with beeps. This is Squeegee Learns About Drugs from 1971.

So do you feel all nostalgic now?  Did it take you back to those old school day memories?  This is definitely a product of its time and is quickly becoming a forgotten type of media.  Can you imagine children sitting still and watching all 13 minutes and 23 seconds of this?

Now I want to mention a little bit about Mary Lou Anderson, the creator of this filmstrip.  She's a Kansas City personality that has been entertaining and teaching children through the use of her puppets for fifty years plus.  She created Squeegee and the other puppets for the filmstrip.  How'd you like Smartypants?  Even though he doesn't wear pants he's the cool one made from a toilet brush!  Mary performed as a puppeteer and as a main character for Channel 41 KMBA's two kid shows.  41 Treehouse Lane and Mother Nature were on the air from the 1970's until the early 1980's.  I didn't grow up in KC, so I wasn't familiar with Mary Lou Anderson but since finding this filmstrip, I've found some online info about her. 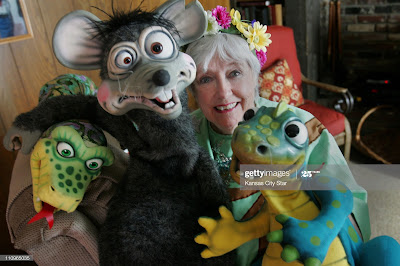 From 2011, is this fun photo of Mary with her puppets from Getty Images.


Mary showed up on a Kansas City local news channel in 2017.  For another video, follow this Facebook link for a great interview with her from the same year.

One last item connected to Mary is this great 1974 newspaper ad for Winchell's Donut House.  Mary as her character Mother Nature was a judge for the donut eating contest. Now that would have made a great filmstrip!


Oops, I almost forgot. Did you notice the stack of books that Squeegee is next to in the filmstrip?  If you're like me, you were probably straining your eyes trying to figure out the titles.  No worries because I figured it out.

I remember enjoying film strips because it meant we did not have to work very hard.