I’m bummed! You know why? Three important celebrities came to town and I missed seeing them. No autographs, no photographs and not even a lousy hand/tentacle shake because I didn’t even know that they were here. I missed them by 30 years and I’ll tell you I’m just bummed out. 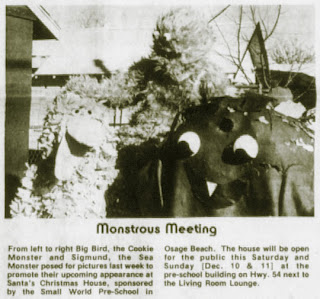 According to this newspaper clipping Sigmund the Sea Monster, Big Bird and Cookie Monster made an appearance in 1977 at Santa’s Christmas House here at the Lake of the Ozarks. Since I was only seven years old and didn’t read the newspaper I had no clue these TV stars were only a few blocks away from my school. You would think they would’ve at least dropped in at our elementary. 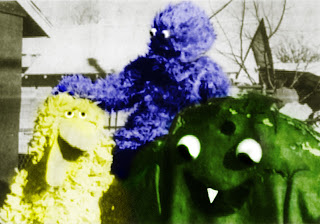 You know it’s kind of odd that Sigmund was hanging around Cookie Monster and Big Bird. I wonder if he was trying to get on Sesame Street since his show was canceled a few years before.
Posted by Mayor Todd Franklin at 12:12 AM

Email ThisBlogThis!Share to TwitterShare to FacebookShare to Pinterest
Labels: 1970's, Lake of the Ozarks

Love the cheesy knock off costumes!

I'm thinking that if Big Bird looked like that today, he wouldn't still be such a huge star. Thank goodness for cosmetic surgery!

I have seen those characters in those costumes in my nightmares. Thank you for single-handedly destroying years and years of therapy.