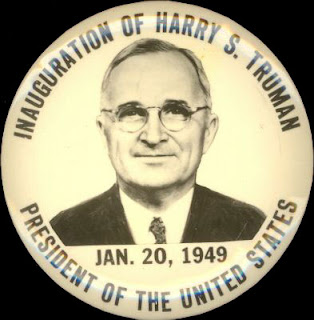 I'm not into collecting political buttons but I wanted to put a plug in for a friend of mine who is selling one of the rarest Truman pinbacks that's out there and it looks like there's already a lot of interest on ebay. So go have a look at the Harry Truman Inauguration Pinback Button.

Now I know if I ever see one in a dollar junk box at a flea market I'll be sure to pick it up.
Posted by Mayor Todd Franklin at 11:14 AM

Shazam!!! I'll certainly be looking for some of those now!