THE STORY OF FRANKEN CLAUS

Here is a rare Gruffman’s souvenir photo folder with Santa. 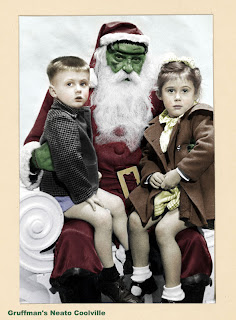 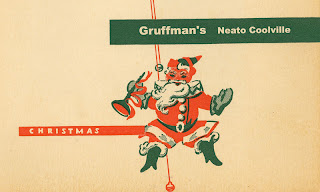 Now here’s the story behind this photo and why Frankenstein's Monster is playing Santa.

For years Neato Coolville resident Stanley Lunder played Santa Claus at Gruffman’s Department store delighting children every year during Christmas. One year, poor Stanley agreed to play the Frankenstein’s Monster during a Halloween promotion at Gruffman’s and he was a big hit and brought in big crowds for the department store.

The sad and horrific thing was that he had a terrible reaction to his monster make-up and it permanently stuck to his face and hands. Gruffman’s sent him all over the country to some of the best doctors to try and remove the make-up, but for some unknown reason he was to wear his monster make-up for the rest of his life.

When Christmas rolled around Stanley actually tried to play Santa Claus, but unfortunately this only lasted a week or two as he kept scaring the children. Gruffman’s saw a huge drop in customers and poor Stanley Lunder was soon out of work.

What was a newly man made monster supposed to do? Well this does have a happy ending as Stanley Lunder learned to live with his new face and became successful traveling around the country to sideshows, fairs, movie theaters and Halloween events. He would eventually return to his hometown of Neato Coolville and open the very successful wax museum appropriately named Dr. Frankenstein’s Wax Museum.
Posted by Mayor Todd Franklin at 12:46 PM