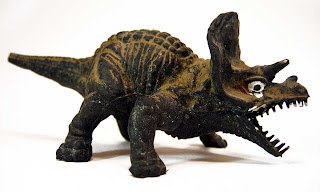 I have no clue where this little rubber dinosaur came from, but he’s been with me since I was three or four. He was always one of my favorite toys even tho he didn’t come from any movie or TV show. He never had any buttons to push for a realistic dinosaur sounds. And he’s been frozen in the same pose for more than thirty years, so no 8-points of articulation. Boy was he a fun toy! 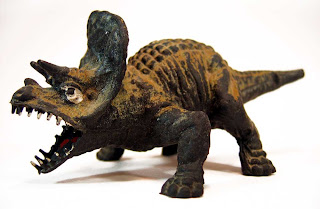 Seriously he was a great toy! I could stick my finger into his mouth and run around the house screaming in agony like he’s chewing my finger to the bone. He was a fun bath buddy because after filling him up with water he became a water squirter with just a simple squeeze. Anybody who dared to enter the bathroom would usually get dinosaur spit all over ‘em! Other fun activities were anthill stomping, footprints in clay, attacking plastic army men and scare girls at school. 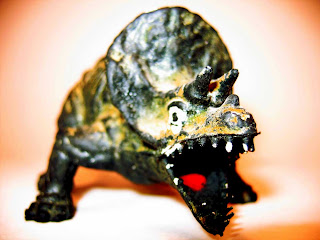 For all these years he has never been packed away and he’s always been close by on a bookshelf or desk. He’s spent the past fourteen years sitting on my computer desk greeting me hello every morning when I turn the computer on. He sure has been a good little rubber dinosaur! 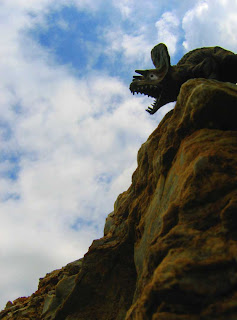 He probably hasn't been outside since the days of playing in the sandbox, so today was his day for some fresh air. 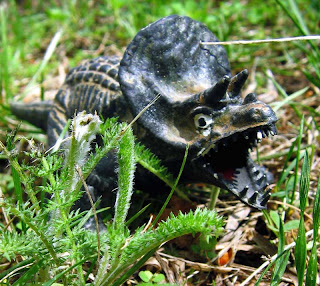 Email ThisBlogThis!Share to TwitterShare to FacebookShare to Pinterest
Labels: Memories from the Mayor, Toys

Awesome post Todd, love the photos. I had one of these little guys too, and also a T Rex. But alas, I was not too kind to my dino buddies, not when 4th of July came around and meant blowing anything and everything I owned to smithereenies. Their open mouths were almost begging for a lit M-80.

i have over 500 toy dinosaurs, most of which are the open mouth, non articulated kind, so i feel your love!

Having just discovered my T-rex rubber Empire dinosaur in a box of stuff, I just started Googling around to see if anyone had done a post on these babies.
Of COURSE Neato Coolville had!

I actually had this Triceratops-- two of them actually. Both got lost somewhere but the T-rex and Dimetrodon (the one with the fin on its back) both are in excellent condition.