RAIDERS OF THE LOST NERD

Raiders of the Lost Nerd from Todd Franklin on Vimeo.


My Junior High had some type of costume day. I don’t remember, but I don’t think it was for Halloween. I do remember that I wanted to go as Indiana Jones or a zombie. I should have gone as a zombie instead. As always with anything school related, I waited until the last minute to put my costume together. I just assumed that making myself look like Indy would be easy. After all I had my trusty bullwhip that I bought at Six Flags right after Raiders came out. I practiced with that bullwhip all the time, until it stung me right underneath my eye. I almost whipped my eye out of its socket! 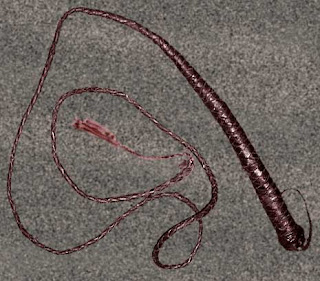 Anyway, I knew my dad had an old fedora hat and I had some rugged old boots. No sweat, this costume would be a cinch to put together. At least that’s what I thought. My heart sank when dad dug out his fedora that had been buried in the closet. I forgot that dad stretched and beat the fedora into a classic hillbilly hat a few years earlier. (We do live in the Ozarks!) This hat would have been perfect if I’d gone as Jed Clampett. My grandma worked feverishly trying reshape the hat. The next problem is that I didn’t have any Indy style pants. I suggested roughing up my church going tan slacks, but mom didn’t go for that. Parachute pants wouldn’t work. So, I went with what I wore every day in school, Levi jeans. Another problem was that my only pair of boots were too small. I had out grown them. How did that happen as I wore them the just the year before? I was forced to go with my every day bright white Nikes. (Boy, the Nazis and Thuggees would’ve spotted me a mile away!) At least dad found a cool old hunting bag that sort of looked like Indy's artifact bag.

The next morning after drawing on my facial scruff and putting on my gear I felt pretty good. All the kids on the bus thought I looked kind of like Indy and even the bus driver gave me a thumbs up as he whistled the Indy theme. When I got to school and roamed the halls with my pals, I felt kind of on top of things, just like I was the real Indy ready for adventure. Then after first period my buddy Jason told me there’s another Indy at school. This Indy wore a leather jacket, had a better looking hat and to top it off, he had a pistol on his belt. Oh man, I felt like the girl at the prom who shows up wearing the same dress as the prom queen. Ug, this was bad. I ran into the kid and we both stared each other up and down and both said nice costume and walked on. We both knew he had the better costume. (Heck, he even made the year book) Yeah, I should have gone as a zombie! 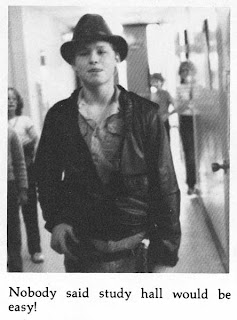 Finally the day was over and I survived as a poor man’s Indiana Jones amongst kids dressed as Ghostbusters, Magnums, Buckwheats, Blues Brothers, McKensie Brothers and one other Indy.

All day everyone bugged me to untie my bullwhip off of my belt. I kept it tied on so I wouldn't get it taken away by a teacher or even worst, torn up by other kids. Naturally on the bus ride home, a friend grabbed the end of it and pulled off the handle. My bullwhip was ruined! Thanks a lot Marcia!!! (In the video you can see me picking up the handle after it falls on the ground)

As I get off the bus there’s my own mom wanting to document my misery from a tough and grueling adventure in Junior High. As embarrassing as this video is, a big thanks to my mom for filming it!! So thanks mom for documenting an awkward moment in my teenage life!
Posted by Mayor Todd Franklin at 2:25 PM

Email ThisBlogThis!Share to TwitterShare to FacebookShare to Pinterest
Labels: Indiana Jones, Memories from the Mayor, Video

I'm speechless NC! By the way, do you still draw your facial scruff?

Thanks for sharing that intimate moment, Neato, and make us remember our intimate embarressing costume days. I don't recall many, I remember though going as a Japanese warrior, in a black silk kimono (with flowers), with one of those Kendo Shinai bamboo practice swords, and a matching reed Peasant hat, and slit eye makeup, looking more like Sean Connery in FOR YOUR EYES ONLY than a Japanese warrior of course. Oh, I was Eight, 1983.
–Roloff

Okay, maybe a little awkward, but great to have!
I bought a black fedora around the same time because I thought it looked cool and Raiders-ish. I think I wore it to the mall once and put it away forever.

Pah. The brim on that other Indy's fedora is too narrow. You still win :)

Oddly enough, I went as Indy two Halloweens ago. Pretty much the same approach you took, too. Mostly found parts. Incidentally, if you ever need to reshape a fedora again, you can steam it or soak it in hot water, then sit it on something (or stuff it with a towel) until it dries. I had 'made' my own Indy hat some years ago by re-shaping an old 'campaign' hat (Smokey Bear-type hat).

Thanks for sharing your story, and all the pics at the photoblog.

Mike - The First Lady draws that on for me!

Roloff - Thanks for sharing your own school costume memories. Cool, a Japanese Warrior would've been very cool.

Glen - Yeah, you gotta love those awkward teenage years. Not then of course, but looking back now. Yeah, I just felt silly wearing my fedora, so that's why mine has always sat on a shelf.

Mike J. - Thanks for the thumbs up - I can now hold my fedora wearing head up high! Speaking of fedoras thanks for the reshaping tip. I bet we'll see some Indys this Halloween.

I better not see any of that this weekend!!