I about flipped at the auction where I found this vintage snapshot. Click on and look closely at the photo! 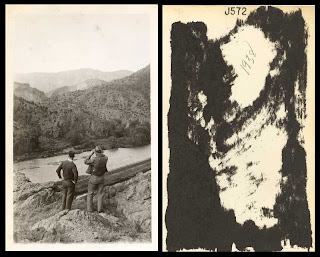 Doesn’t that guy look like Indiana Jones? You bet he does! He’s wearing the trademarked fedora, the leather jacket and even his pants look like the ones worn by Indy. The kicker is the year 1938 scribbled on the back of the photo.

- UPDATE - A savvy eagle-eyed reader just emailed that she noticed the face of Indy on the back side of the snapshot. She’s right! If you look at the pattern made by black album paper stuck on the back, it resembles Indy. You can see his profile - his hat, nose, chin and maybe some sun glasses. Weird! -

UPDATE -This is not a photoshoped photo, nor did I write the date on the back. It’s exactly how I found it mixed in with hundreds of old snapshots from many different families from all over. We do know that the photo was taken in Colorado on the Arkansas River thanks to the inscriptions on the backs of some of these photos. The Indy photo was with this group of photos and they also have the year 1938 written on them. 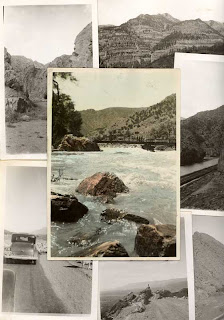 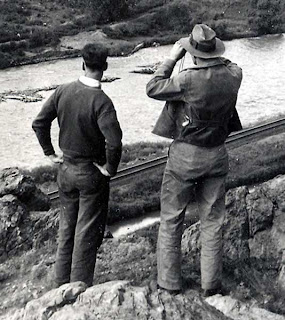 I wonder what Indy was searching for in Colorado? In the photo we can see that he spots something with his binoculars. Was Indy on the trail of the Legend of La Caverna del Oro the Cave of Gold? Maybe he was looking for Dead Man’s Cave or was he in search of the Twelve Chests of Gold?
Posted by Mayor Todd Franklin at 2:34 PM

I think he was looking for the ruins of the Cooper Theater! By the way, this guy has nothing on 14 year old NC!!

>was he in search of the Twelve Chests of Gold?

Maybe he was just looking for a bathroom?

Cool photo. This was a fun week of posts... heading out in about an hour to see Indy 4 myself!

What a great find!