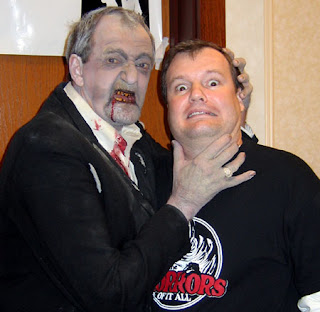 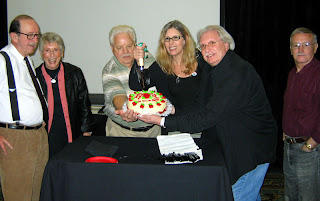 Also visit Weird Hollow for a fun zombie photo from the Monstrous Weekend
Posted by Mayor Todd Franklin at 8:45 AM

The amazing thing is that the second I saw your photo, I said to myself, "Hey! That's the guy from 'Night of the Living Dead!!!". Astounding that he is still so recognizable 40 years later.

So cool! It looks like you had a lot of fun, and that the cast did too!

Major - Yeah and I like how he made his suit resemble the one he wore in the film.

Dane - We sure had a fun time and you're right the cast looked to be enjoying themselves.

I wonder if he will be buried in his zombie makeup and suit? How creepy would that funeral be? Everyone would be fearful he was going to sit up any second!

He looks better there than he did in the additional footage filmed for the 30th anniv edition of NOTLD.

Haha, awesome pic Todd... it was cool hanging with you at the show too. Thanks for the plugs here as well!

Frederick - What do you mean? He already was buried in that suit. He's a real zombie from the grave right?

Karswell - Thanks and yeah, it was great seeing you too and thanks for adding my pic to the coolest ghoulest comic blog out there!