ROMAN MEAL BREAD IS THE BEST

Today’s post was inspired by my breakfast! That’s right, while I was enjoying two pieces of peanut buttered toast and orange juice, it dawned on me that I’ve never blogged about my favorite bread, Roman Meal! 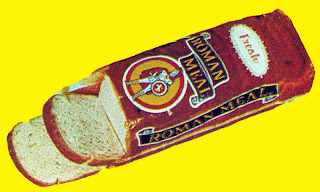 I’ve been enjoying Roman Meal since I was a kid and no bread comes close to the flavor of Roman Meal. In celebration of this wonderful loaf of goodness I dug thru my collection of goodies and found this 1959 ad with the one and only Woody Woodpecker! 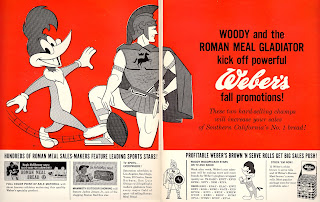 Next we have this nifty little sandwich recipe booklet from 1973. I really like the cartoon version of the Roman Meal Gladiator that teaches us about “A Secret of Ancient Rome.” 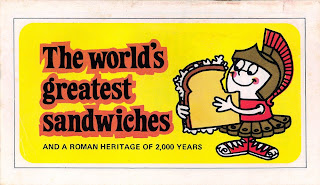 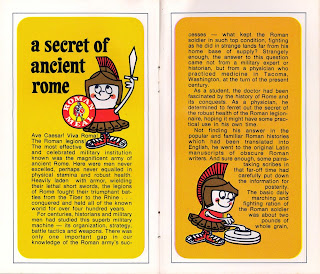 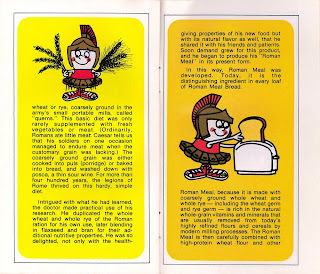 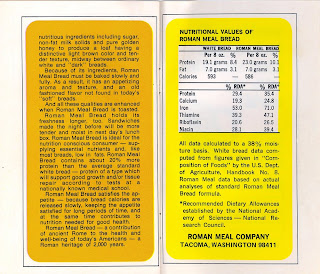 The cartoon mascot is so much fun. I think Roman Meal needs to bring him back. I'm not sure if he starred in any animated commercials, but really the little guy should.

Did you know that Roman Meal has their own YouTube channel? Neither did I until I searched for some old commercials. Check out this 1970's animated spot -

I believe the narrator is Robert Fuller, best remembered as Dr. Kelly Bracket from the TV show Emergency! and other TV shows like Laramie and Wagon Train.

Here's an interesting Roman Meal related item I saw on ebay one day. Interesting to see how the logo has changed. (Photo taken from ebay.) 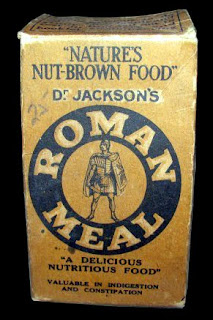 Also, visit this link for a neat 1981 magazine ad that's just super! For you folks on a diet, visit here and here for some vintage graphics.

Gosh, this post has me so hungry that I've forgotten all about this morning's toast. You know? When I was kid, I used to make a triple decker peanut butter and jelly sandwich (using Roman Meal) with a side of Doritos and chocolate milk to wash it down. Hmm... I might have to revisit my old childhood meal for lunch! 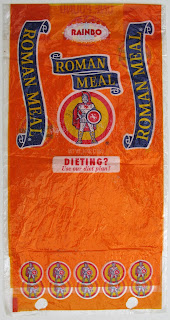 Posted by Mayor Todd Franklin at 11:26 AM

Great post! I remember that little cartoon mascot, but cannot recall if he was on the bags or not.

You have peanut buttered toast for breakfast?

You really have to admire Roman Meal for promoting whole grains to the mainstream (as opposed to the health food fringe) long before anyone else.

And yes, that is Robert Fuller doing the voiceover on the commercial
(you can wash it down with the malt liquor hie touts in another ad from this era).