Twenty years ago my brother reached into the fridge for an ice cold Coca-Cola and became twenty dollars richer. He was lucky and found a Magican! The year was 1990 during Coke’s big sweepstakes promotion. Even though big brother was happy to find a double sawbuck, the cola giant’s promotion was an epic fail classic!

Here is my brother Pat’s Magican. It was just recently found in our childhood home hidden in the back of the kitchen’s Lazy Susan. 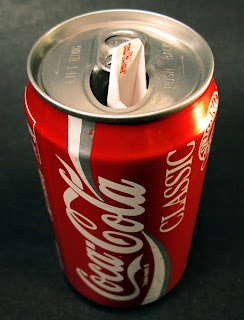 The Magicans were special Coke cans that didn’t have cola inside but instead housed a rolled up money bill or a prize certificate. Once the can was opened, the prize would pop out. 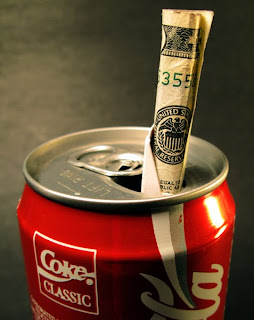 The “fake” can has a similar weight of an actual cola filled can and it is filled with a small amount of liquid to help with the illusion that the can is an ordinary Coke can.

The Coke ad wizards really thought they came up with a super idea with Magicans and spent millions of dollars promoting the sweepstakes. Watch the commercial below -


Apparently, the promotion started to turn foul as lots of complaints from customers started pouring in. There was problems with the pop-up mechanism and reports of kids drinking the non-cola liquid that was inside. At least there wasn’t a kid that went all Battlestar Galactica and swallowed a rolled up five dollar bill projectile.

You can read about the problems here in this New York Times article from 1990.

Ten reasons this promo was an epic fail -
1. Faulty springs.
2. Smelly liquid.
3. New Kids on the Block.
4. No Max Headroom.
5. Magic In The Real Thing song hurts the ears.
6. Urban legend that some kid died from drinking the liquid.
7. That there’s not an urban legend that some kid died from swallowing a five dollar bill.
8. Rolled up money bills in a product named COKE (and just one year removed from the 1980's).
9. After you’ve been walking in the desert for miles dying of thirst because you just finished a whole bag of potato chips and when you open the last can of coke, out pops a lousy five dollar bill.
10. I wish I could have found a Magican instead of my brother.
Posted by Mayor Todd Franklin at 11:11 AM

Email ThisBlogThis!Share to TwitterShare to FacebookShare to Pinterest
Labels: Memories from the Mayor, Vintage Advertising

Haha I so remember that fail addled promo. Awesome list of why it was so sucktastic ;)

Nobody I knew ever got a Magican, but some years earlier, my friend Jerry woke up thirsty in the middle of the night, scraped together the only change he could find in the house, and snuck out of the house to go to the Coke machine outside the Sky City adjacent to his apartment complex. He poured his only funds into the machine, hit the button, and was confounded to receive one of the cans with Max Headroom t-shirts in it instead of the hoped-for beverage. And he returned home in thirsty defeat.

So you would have rather had a magician around the house than Pat? Makes sense :)

I totally don't remember this promotion at all, but then again my mom never really bought soda for us back in those days except for disgusting ass TAB Cola.

Wow, I always wondered what those looked like. I wasn't even sure that they were real. Thanks for enlightening me!

I won five dollars from a MagicCan (and saved it myself).

I got one of these cans it had $10 bucks in it. Problem is at the age of 12 I didn't think to save the can. It probably will be worth some money someday cause there wasn't a lot of winners and a lot of the cans were recalled when they realized it had the potential to be dangerous. So I guess if you won keep your can for a long while till its worth some big bucks :)

I was about 8 when I popped the top! I won $100. Somehow after all the years I still have the can. Any idea of its value if any?