SORRY SCRAPPY-DOO, BUT I THINK I HATE YOU

This week's assignment for members of the League of Extraordinary Bloggers - "What piece of pop culture did you HATE as a kid? Hmm...I usually stick to the positive side of things here on the blog, but I'll try to give in to the dark side and explore some pop culture hatred from my childhood. 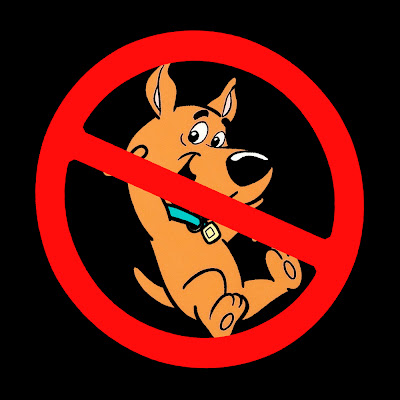 PUPPY POWER!!! Whenever I hear those two words, a shiver goes up my spine. "Puppy power," was one of Scrappy-Doo's annoying battle cries. This little pipsqueak of a pup, introduced in 1979 on the Scooby-Doo and Scrappy-Doo show, was so annoying he caused my young brain to split! 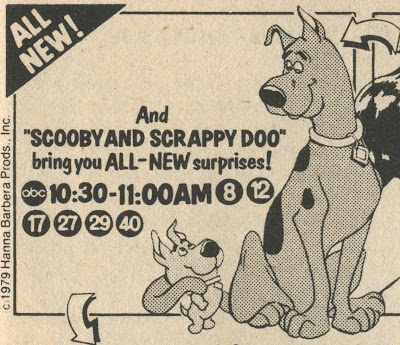 Scrappy was co-created by Joseph Barbera and Mark Evanier. Say what? How could these two amazing talents create such an abomination like Scrappy? Click here to read Mark Evanier's six-part post about Scrappy's creation. Sure, I get the whole "let's keep things fresh with a new character" strategy. But for me, as a nine year old, I wasn't buying Scrappy-Doo one bit!

Scrappy simply ruined everything that was fun about Scooby and the gang. Instead of new Scooby adventures with Scrappy, I would have been just as content watching the same reruns of Scooby-Doo Where Are You! and The New Scooby-Doo Movies over and over. The hatred of Scrappy was discussed many times around the water fountain back in my elementary school. I didn't know anyone who actually liked the pungent pup. All of us felt sorry for poor Scooby stuck with such an annoying nephew. No wonder Scooby's sister Ruby-Doo didn't want to care for the demon dog. So many cartoons suffer from overtly cutesy sidekicks that come from the planet ForcedHumor. Scrappy was one of the worst and he should have been scrapped a long time ago.

Scrappy wasn't the first annoying cutesy character to ruin a Saturday morning TV show. There are so many of them they could start a League of Extra-annoying Toons. The roll-call would be Scrappy-Doo, Bat-Mite, The Great Gazoo, Mr. Cool, Orbitty, Baby Plas, 7-Zark-7, Uni, Orko, Brainy Smurf. H.E.R.B.I.E., Snarf, Godzooky and all Snorks.

Okay, now I need to go watch some old Scooby-Doo Where Are You! episodes to cleanse my eyes of Scrappy-Doo.

Check out some of the hate from other LOEB members.
pop rewind hates cereal mascots who had their cereal revoked
shezcrafti hates Zoobilee Zoo
adventures of a geeky vixen hates My Little Pony
Toyriffic hates G.I. Joe

Scrappy reminds me of being sick and home from school. I'd watch this show and kick back.

I can't sympathize with Scrappy,he created his own damn circumstances.Alot of the old anime/manga type cartoons gave me a very bad vibe,perhaps I was too young for their decidedly heavy,often violent content.I'm talking about stuff like Speed Racer,Astro Boy(old Fire Feet really gave me the creeps),etc.Even the ones I liked (King Kong,Kimba,Tobor)gave me a feeling of disquiet.But at least they were well produced and visually appealing.I can remember being really steamed about those horrible Popeye remakes of the 80's.That was just plain BAD.

The 2002 Scooby Doo movie seems to have been aimed at fans who hated Scrappy. I probably could have tolerated the addition of a cute sidekick if he had been kept as a secondary character, but Scrappy became the focus. What I hated about the later TV (or direct to video) movies was when they began to encounter real supernatural monsters, vampires, and ghosts (the "Boo Brothers," "Reluctant Werewolf," "Witch's Curse," etc.). What I liked about the original series was that the mystery always had a rational explanation.

Scrappy was the worst. I could believe Scooby because he was a dog who tried to talk and did so in a dog fashion. Scrappy was full out educated and could explain himself fully which destroyed the whole illusion of Scooby-Doo for me.

And how could you hate the SNORKS, they were the Gummy Bears of their day.

We recently started watching "Scooby Doo: Mystery Incorporated" on Netflix streaming, which is actually a really funny, very meta SD show that I recommend any fan of the original show check out.

Anyway, Velma's parents run a paranormal museum where a lot of the old characters/villains from the past are displayed as wax figures. There's a scene where Fred and Daphne are looking through the museum's displays and they come across a figure of Scrappy. They both look at it for a moment and then Daphne says, "Remember when-" Fred cuts her off and says, "No. That never happened. We don't talk about that anymore." and then they move along to the next exhibit.

I'm glad to see that another generation won't have to be subjected to he who shall not be named.

I'm not sure what makes Scrappy so annoying, but he is truly annoying. maybe the reasons go beyond any measure or logics.

7-zark-7 will always be the worst for me. They cut out the awesome fight scenes and stuck him in because they felt that those scenes were too violent. Ugh. And he was sooooo annoying and really would mess up the mood and flow of the show. Scrappy is second though. No doubt. I was so happy, when as an adult, I discovered Gatchaman.

I'm enjoying hearing about everyone's toon hates! Who knew hating something could be this much fun!

I didn't mind Scrappy Doo at the time, although his adult dog-sized head on a puppy's body bothered me a little. I dislike Scooby Dumb more. Add to your list of annoying characters Fang Baby from Fangface.

You had me there until you dissed Bat-Mite. Loved Bat-Mite, and for better or worse he was part of Batman continuity before the cartoon.

Scrappy Doo, I completely agree on. Did Dynomutt and Scrappy-Doo ever appear onscreen in a crossover episode? If so, that would have been the epitome of awful HB dog characters IMO.

Scrappy Doo was to Scooby and the gang what Cousin Oliver was to the Brady kids. Annoying turds, both.

I think Scrappy's character was toned down after 1983, and he became much more calm and the show wasn't focused on him like the 1978-1982 years,, series such as "The 13 Ghosts Of Scooby-Doo," showed how he evolved and was less childish and naive as the earlier episodes.

Why thank you for that tasteless, inaccurate, and vitriolic essay on a subject it's painfully obvious you know little to nothing about.
Your opinion on Scrappy's "Badness" is, in its simplicity and narrowmindedness, the paragon of depth and compels the reader into understanding and agreement of your hatred with ease and grace comparable to Scooby and Shaggy fleeing a phantom. Quite applausible, all things considered. The reader can easily grasp Scrappy's "annoyingness" thanks to the many sound examples and explanations you provide, and how Scrappy's, an intangible cartoon character who is comprised of many still cell drawings, sheer existance somehow managed to harm you are quite plausible. Really. QUITE plausible, like snow in July or the lovechild of mixed oil and water.
http://www.newsfromme.com/writings/scrappy-days/
This is a blog by a Scooby-Doo writer I recommend you read. Although
if the levels of maturity are too high for you, then I would completely understand.
PS: I probably wasn't one of those kids you met up with at the water fountain, or else you could say you have met someone who liked Scrappy-Doo. BUT, you have now. Unless you were planning to humiliate yourself more by spreading around that claim, then I am deeply sorry.
Otherwise, it is for the best.
Good Day.