THE DAY I MET MOEBIUS 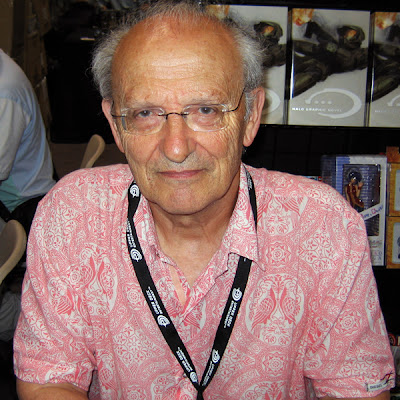 I was sad to hear that Jean (Moebius) Giraud passed away on March 10.  I'm sure most Neato Readers are familiar with the famous comic and film concept artist.  (If by chance you are not, click here and here.)  I was introduced to his work from reading about his involvement in Tron. Then later when he worked on various Marvel projects like the fantastic Silver Surfer book with Stan Lee.

In 2006 at the San Diego Comic-Con I met Moebius.  It was a once in a lifetime chance and one of my most cherished comic-con moments.  I realized the importance and the rarity of my brief meeting.  There I was, just some guy from Missouri meeting an art legend from France.  Ah, the beauty of Comic-Con!

Moebius was listed to appear at a signing for Marvel's Halo Graphic Novel.  It contained a collection of short stories based after the popular video game.  Supposedly his son was a fan of the video game and convinced him to draw one of the stories.  I jumped in line and waited for my opportunity.  The line started to move and I eventually found myself standing in front of him.  Of course I recited the fan boy anthem, "It's an honor to meet you and I'm a big fan of your work."  Even though he's heard that line a million times, he smiled and said thank you, like it was the first time he had ever heard it.  I handed him a Star Wars Galaxy card for him to sign. 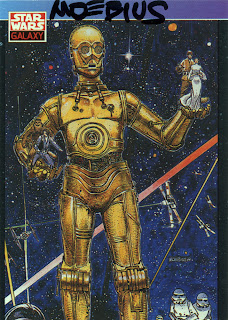 I'm terrible at remembering conversations, but he did mention something about trying to get the artwork just right because he enjoyed the film so much.  (I wish I had had a recorder with me at the time or at least a better memory.)

Since 2001, I've been carrying a sketchbook with me to comic conventions.  I presented it to Moebius simply asking for a signature.  He smiled and took the book from me and started to draw.  He said something like, "I think you'll like this better than my autograph."  Not only was I getting one of the most important sketches in my book, it was thrilling to watch him actually draw it. 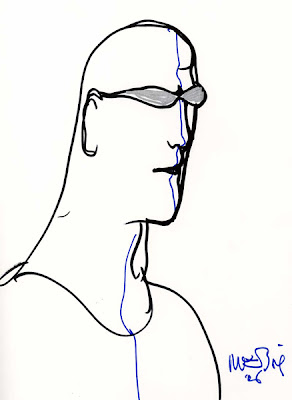 I'll always appreciate his kindness for sharing the cool looking guy with the silver shades that now lives inside my sketchbook.

He will be missed.  RIP Moebius.
Posted by Mayor Todd Franklin at 3:58 PM

What an awesome memento and a cool memory (the sketch, I mean).