Back when I was kid, one of my favorite things to watch on TV were the Little Rascals/Our Gang comedies.  They were usually shown as part of a local kiddie show and I remember how much fun it was watching the crazy antics of these depression era kids.  Sometime in the early 80s my maternal Grandmother surprised me with an Our Gang jigsaw puzzle.  No this wasn't some newly created piece of nostalgia but an authentic piece of memorabilia during the original run of the comedy series. 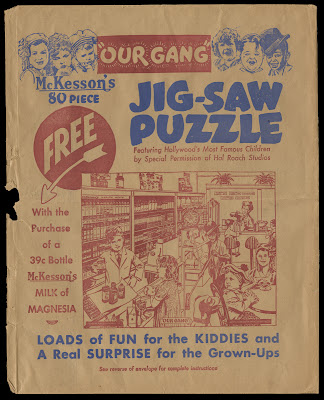 Originally in 1932, it was to be given away free with a bottle of McKesson's Milk of Magnesia. Boy, that was a pretty sweet deal even if Milk of Magnesia wasn't that appealing to kids.

(Sticking with the Our Gang theme, McKesson should have given this puzzle away with a a bottle of castor oil.) 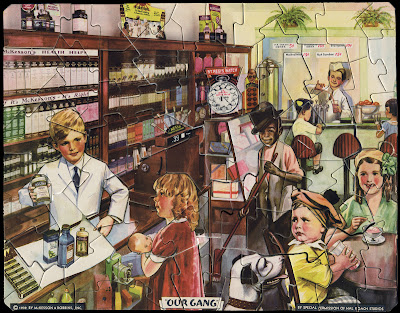 My Grandmother didn't recieve the puzzle back in the 30s with a bottle purchase.  Instead she bought the puzzle in the 1980s from Swensson's Drug Store in Macon, Missouri.  The puzzle was a perfect example of "new old stock" because the drug store owners found a stash of the puzzles that were never given away. 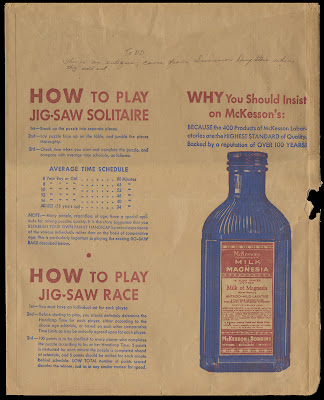 Luckily this artifact from my childhood survived thanks to my paternal Grandmother who helped me frame it for my bedroom wall.  It stayed on my wall until I moved away from home and for the past twenty years or so it has been buried in a box.  I kinda forgot about it until recently when I unearthed it. It was pretty excited when I opened up the frame to find that my Grandmother saved the envelope and stuffed it behind the puzzle for protection.

Wow, that's two Grandmothers working in tandem!  One to gift it and the other to preserve it.
Posted by Mayor Todd Franklin at 12:00 AM

Email ThisBlogThis!Share to TwitterShare to FacebookShare to Pinterest
Labels: 1930's, Memories from the Mayor

I want that puzzle! I loved that show! Give me!