THE FIRST TIME I SAW THE MOVIE TRON 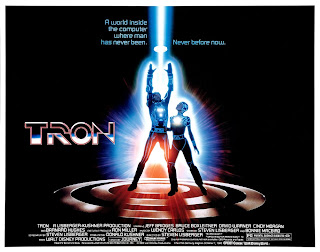 The year 1982 might just be the best movie year ever! There were so many killer movies during that time and for me, a 12yr old kid, I was in movie heaven. It would be a difficult task if I was pressed to make a list of my top ten movies from ‘82. One movie that would be close to the top was Disney’s Tron. As I mentioned in yesterday’s post, I became a Tron fan because of the video game. Tron showed up in our town a few months after its July 9th release and only lasted for one week at the Four Seasons Cinema. (That’s the same theater where I first saw Star Wars.) My brother and I were anxiously waiting for Tron to come to a theater near us after reading about it in magazines like Starlog and Electronic Games. Once we saw this newspaper ad in our local paper, we only had one short (it felt like forever) week to wait. 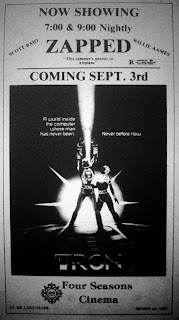 Sometimes a movie going experience can be just as special as the movie itself. This was the case with Tron. Our pal Eddie, a neat guy that went to our church and a close friend of the family, took my brother and me to see Tron.

It was September when we hopped into Eddie’s yellow Volkswagen Rabbit and zoomed down to the cinema. We hung out playing some video games at the small arcade next to the cinema, until it was time to take our seats. Here’s a photo of the interior of the theater back in 2007. 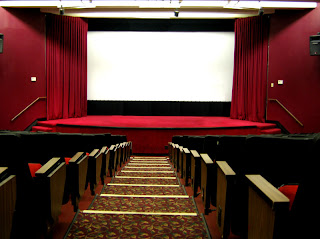 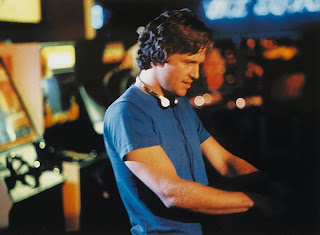 Video games and movies have always shared a big part of my entertainment pastime and seeing Tron for the first time has remained a cherished memory for me. It’s so cherished that I started to pick up Tron merchandise whenever I found it at toy shows. It was cheap stuff back in the 90's and you’ll be seeing some of it this week.

Nowadays, I feel like I’m living in a Bizarro universe where Tron is a popular thing. Time is harsh for some films and many movies that were popular during their time have been forgotten. I like the notion that Tron has done the opposite and now enjoys a cult following. It might kinda look like a silent film compared to the high tech fast-moving pictures of today, but really the film is a piece of art. Next time you watch Tron on DVD, just pause the film and take a look at the different shapes and colors and especially the architecture. Really it’s a beautiful thing!

Thanks Eddie for taking us to see Tron!!!
Posted by Mayor Todd Franklin at 12:03 AM

Email ThisBlogThis!Share to TwitterShare to FacebookShare to Pinterest
Labels: 1980's, Memories from the Mayor, Movies, Tron

I bet the Cheech And Chong movie and Zapped lasted longer than a week down there. What was better in 82? Star Trek II is the only thing jumping in my head now.

You would think, but most were in one week and out the next. 82 had E.T., Poltergeist, Dark Crystal, Blade Runner, Conan, Creepshow, Secret of NIMH etc.

I don't really remember seeing Tron in the theater being the same age as our host here. What I do remember is how awesome it was to a 12 year old who was into video games and writin BASIC programs on his computer.
Of course at that age I missed the whole religious sublevel of stuff that was going on and it was all about disc battles and ligjt cycles.
My friend and I even made up our own grid game that we played with a frisbee and plastic tubes. Each person had their goal area that they had to defend from an incoming disc using their tube. And of course Return of the Jedi was still a few months off so riding bikes meant lightcycles and not speeder bikes yet.
Tron was so far ahead of its time in regards to the way technology has evolved since 82 it amazes me today. It's almost a pre-cursor to cyberpunk the way Flynn sort of jacks in to the e-world.

I was 15 years old the year Tron was released. I remember sitting in a packed theater sitting next to a man in a suit (computer programer?) and the experience was surreal. Most people - especially me - still did not have a grasp on the realm of computing - as personal computers were still a bit removed from everyday experiences for most people. The movie was mind-blowing for me at that time. I loved it and was in total awe of the imagery. Great memories.