30TH ANNIVERSARY OF E.T. THE EXTRA-TERRESTRIAL

It really seems strange that E.T. turns 30 years old today. On June 11, 1982, E.T. The Extra-Terrestrial touched us all with his flashlight finger.

By age 12, I was a seasoned space movie veteran and was anxiously chomping on my Star Wars figures for this new sci-fi movie by Steven Spielberg. 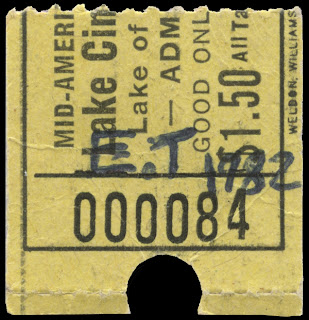 Here's the ticket stub that I saved from the first time I saw E.T. at the Lake Cinema.

I think E.T. was the first movie I really connected with. The movie was such an emotional experience for me, much more than some of my favorite movies like Star Wars and Raiders. Besides the space alien and government entanglements, I was able to relate to Elliot in a big way. I saw a kid that played with the same toys, had a cluttered room, argued with his older brother and had trouble convincing adults to believe him. Yeah, this movie was a lot more than laser battles and evil monsters, this film got inside my heart.

The summer of 1982 is considered one of the best summer movie seasons to date. I completely agree with that, especially if you were a kid that year. I saw a lot of movies in the summer of '82. I saw E.T. three times and each showing was special. From the time my brother made my mom sneak in the family tape recorder in her purse to capture some E.T. audio to the time when Conan the Barbarian movie blared through the thin walls of the twinned theater. E.T. -"Ouch. I'll... be...right...here. Be good" and at the same time we could hear, Conan yelling CROM!!!!

I've held E.T. in a special place, so much that I've refused to watch it on home video. The three times I saw E.T. at the theater are the only times I've seen the film. I don't know why, but I've always liked the idea that the film sits in its special place in time. Stuck way back in my childhood. I'm considering watching it tonight for the first time since 1982. On second thought...maybe I'll wait for the Blu-ray 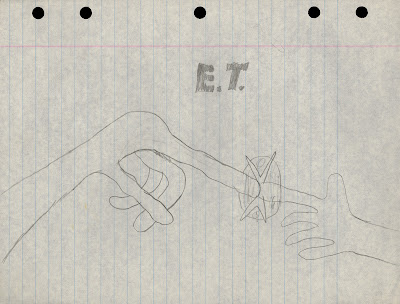 This is the only E.T. drawing I could find in my stash of kid drawings. Instead of a take off of the movie poster, this was probably more inspired by the free E.T. sticker. The one you got after buying Reese's Pieces at the concession stand. 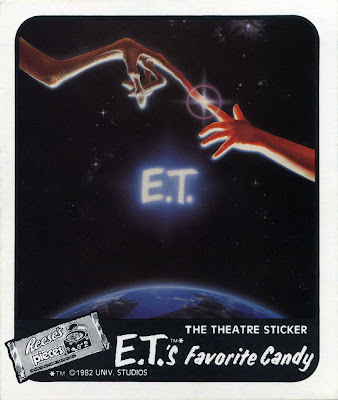 One of the best movie product placements of all time was the Reese's Pieces in E.T. How many kids and adults alike became addicted to the peanut butter in a candy shell candy? I've been addicted since 1982. Thanks a lot E.T.! (Be sure to visit CollectingCandy.com for an excellent E.T. Reese's Pieces post!)

It was good fun each time I visited the theater and picked up a free sticker. At the concession stand was this little E.T. sign with tear away order blanks. You could collect a full set of stickers with five Reese's Pieces bags. 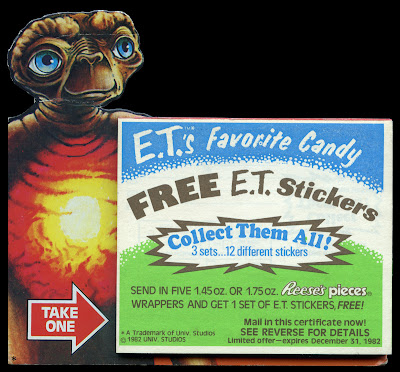 My brother and I ordered a couple of sets and they all ended up stuck on our walls or notebooks. Thanks to ebay I recently picked up an unused set. Here's the complete set of twelve. 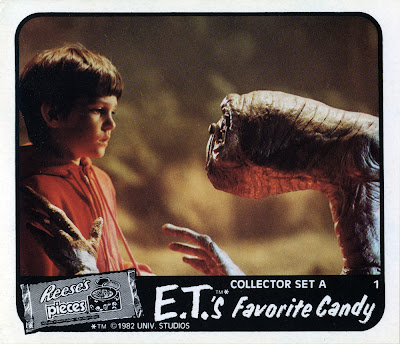 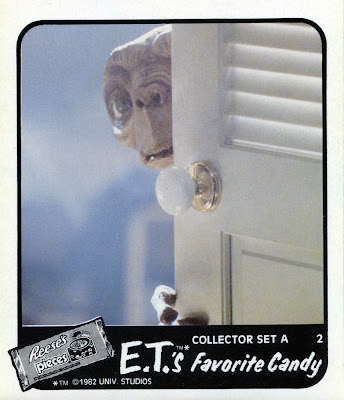 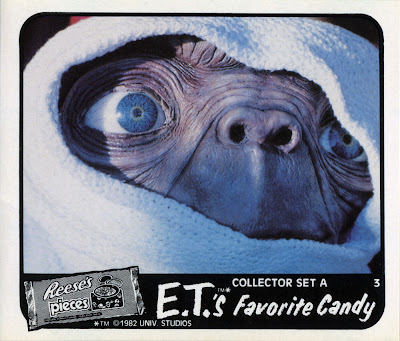 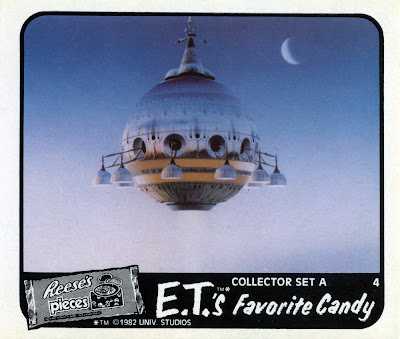 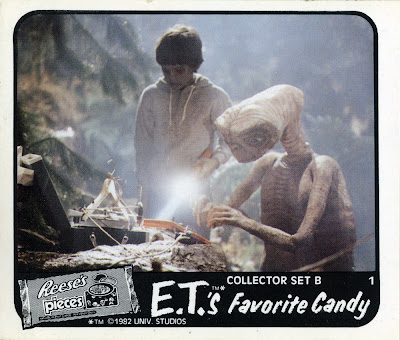 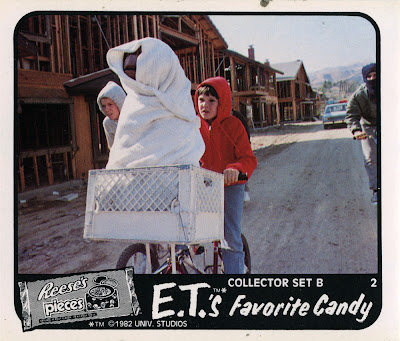 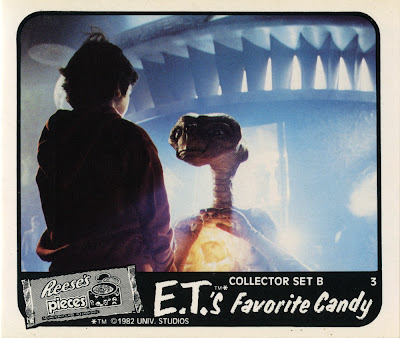 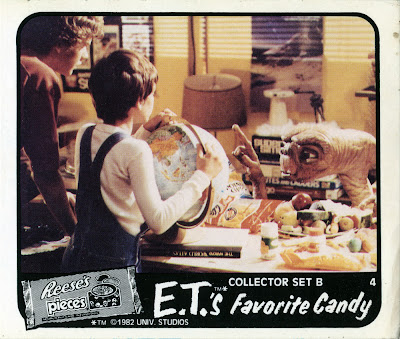 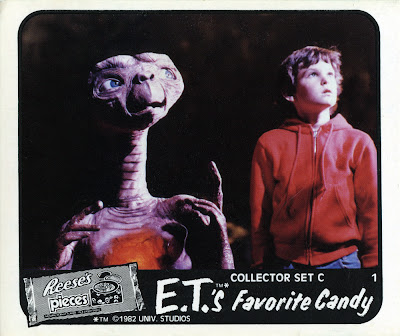 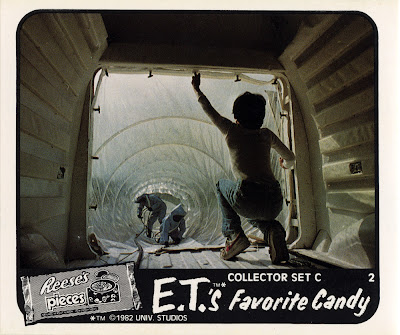 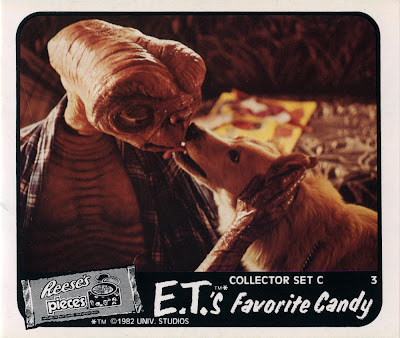 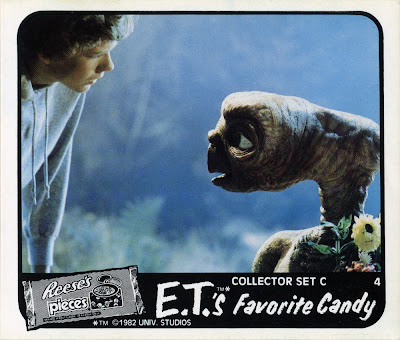 Happy Birthday, E.T. and thanks for phoning 30 years ago!

Email ThisBlogThis!Share to TwitterShare to FacebookShare to Pinterest
Labels: 1980's, Memories from the Mayor, Movies

I was a tad missinformed about the contents of this movie.I went in believing I was going to view something akin to Close Encounters,maybe even a little scarier.One thing for sure,I loved the house Elliot& family lived in.For That matter,I also loved the house the Freelings(Poltergeist) lived in and Brad & Stacey's(Fast Times)home.Something about all these '82 films seemed to inspire the way I have viewed living spaces my entire life.

The E.T. sticker!! My parents almost never allowed me candy, but I had Reese's Pieces that day at the theater - specifically to get that sticker. I was not blown away by the candy (until I saw Elliot handing it out on-screen). But, I held on to that sticker, amazingly unstuck to anything, for years. I wish I knew where it was now. Great, great post Todd. Thanks for bringing back some forgotten memories.

Frankly, I'm not a space-movie person. I only went to see it because it was the summer before I started college and I figured I had to be in the know, as it would be a major topic of discussion. I wasn't really impressed, and no one talked about it.