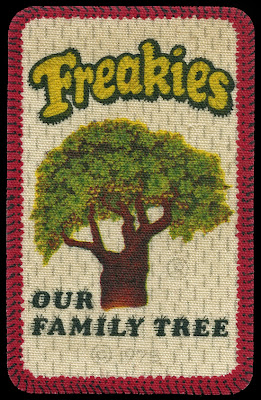 I was sad to hear about the passing of Jackie End, the creator of Freakies cereal. She was an amazing talent that helped shape a generation of kids through her various advertising creations throughout the 1970s. (Visit Freakies.com for a special message about Jackie from the Freakies.)

I have fond memories of eating Freakies cereal and playing with the Freakies cars and figures. Most of my jeans were covered in the patches like the one seen above. Jackie's crazy characters from Freakies and from her other cereals, really had an impact on my imagination.

Unfortunately, I never had the chance to meet Jackie, but was introduced to her in the pages of Kevin Meisner's 1990s cereal fanzine, The Freakie Magnet. Click here for a PDF of FM #2 and scroll down to page 10 for Jackie's article, The Real Freakies.

In three parts, here's a video interview with Jackie produced by Kevin back during The Freakie Magnet days.

Besides her work for Ralston cereal, she has a large resume in the world of advertising. Here's a classic commercial for Safeguard soap that was written by Jackie and stars Tom Selleck.

Another childhood favorite created by Jackie is the Bic Banana crayons and pens campaign. Watch this over the top and funny commercial starring Charles Nelson Reilly.

Jackie was a true ad wizard and continued to create quality advertising work!

Thanks Jackie for creating so many wonderful characters!

I loved Freakies. They were tasty and had really cool prizes. I had a set of little plastic cars with a bulb you'd squeeze to make them go; each one was a different Freakie.

Also, isn't that Penny Marshall at the water cooler in the Safeguard ad??

Oh, wait, there are my Freakmobiles, right there in the interview. :-) Neat interview--what a fun person she must have been.

Yep, that was Penny Marshall in the Safe Guard ad. The Taxi Driver was played by Patty Deutsch(sp?). You may remember her from her appearances on Match Game.

Great to see this interview online! Thanks for posting it!
-Kevin Meisner

She was like an aunt to me- best friends with my mom and stepdad Carole and Andrew Langer. They all worked at DDB together. I spoke at her memorial at Frank Campbell's. I was so in love with her... the best woman who ever lived.
Luke Sacher