THE AMAZING SPIDER-CAR: A TOY FROM MY CHRISTMAS PAST 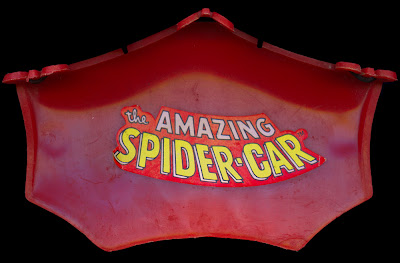 It was the Christmas of 1978 and I found under the Christmas tree the coolest plastic toy car that a boy could ever want! At least it was for this boy. It was The Amazing Spider-Car!!! 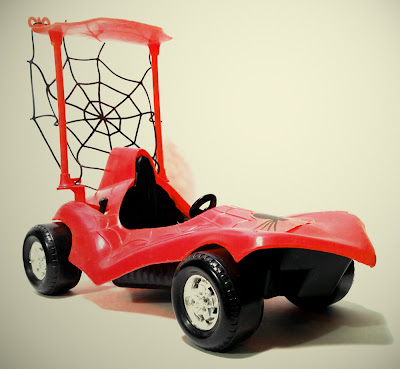 Yes, Spider-Man owned a sweet ride back in the 1970s! This one, made by Mego, was much cooler than Spidey's Spider-Mobile from the comic books, a red and blue painted dune buggy. Mego designed the Spider-Car with superhero style and it was a perfect fit for the 8" Mego Spider-Man action figure. Back when I was a kid, I had my eye on this car for a year or two and I really wanted it for my own Mego Spider-Man. It was always exciting when we got the newest Sears Wish Book and the 1978 edition was chocked full of goodies. Between all the cool Star Wars stuff, I must have circled a dozen items or more including The Amazing Spider-Car. 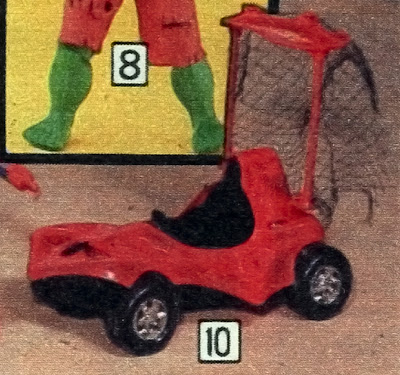 Christmas that year was one of my favorites from childhood. I got so many cool toys that year! (Check out my blog post on the Star Wars Death Star playset.) I pretty much did backflips when I opened my Spider-Car gift. As soon as I pulled the car out of the box, I remember running to my bedroom grabbing my Mego Spidey and putting him in the driver's seat. In no time, I was rolling the Spider-Car across our shag carpet and releasing the special spidernet. Watch out super villains, The Amazing Spider-Car is on duty!

About a week later we had a pretty good ice storm that created a nice blanket of glassy ice all over our driveway and road. I had the brilliant idea that it would be fun to play with my Amazing Spider-Car on the ice. I had a blast zinging Spidey in his Spider-Car over the frozen road. Boy could that car go! 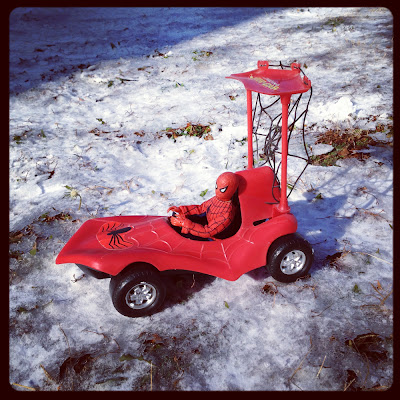 I was having so much fun! I was out there for at least an hour or more watching one of my favorite Christmas gifts slip and slide. Eventually I got too cold and moved indoors with my Spider-Car in hand. Once Mom fueled me up with some hot chocolate, I was ready for another round of Spidey ice racing. It was not to be. I grabbed my Spider-Car and noticed it was cracked in three or four places. Not small cracks, but big cracks all down the sides. NOOOOOOOOOOOOOOO!!!!!!

Oh was I a bummed out little kid. My Spider-Car was broken. I guess it cracked because of the cold or I pressed down too hard when I was playing with it. Regardless, I had a busted up Spider-Car. My Dad tried to mend it but my Spider-Car wasn't the same and it eventually was thrown away. A few years earlier we had to replace my Mego Spider-Man figure. The elastic holding his arms and legs together snapped. Unlike my Spidey figure, for some reason my Spider-Car wasn't replaced. Not sure why, but I blame Star Wars. The store probably didn't have a Spider-Car at the time and I probably picked out a Star Wars toy instead.

At least I had a few day with my Amazing Spider-Car and apparently I had enough fun playing with it on the ice to make a lasting memory! 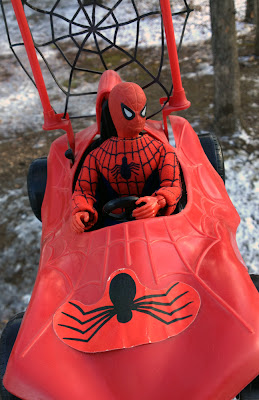 When I was in my 20s I finally replaced my Spider-Car when I found one at a flea market for five bucks! It's the one pictured in the photos above. At the wheel is my childhood Mego Spider-Man figure. Yesterday, we had some snow and ice fall and I nervously recreated the fateful scene from my childhood. Amazingly, this time my Spider-Car didn't crack!

Check out Mego Museum's Spider-Car page! (For some reason, the one that I own has a different spiderweb net.)

Email ThisBlogThis!Share to TwitterShare to FacebookShare to Pinterest
Labels: 1970's, Christmas, Memories from the Mayor

Another classic Franklin Christmas story! 1978 was a great year for toys.

Well that is cool. I had it as a kid too!

It seems they were a bit fragile.I worked my way through the Spider Car(broken axle & body) and Captain Americar(shield smashed against the floor and cracked off)before settling on the Green Arrow Car which gave me no troubles and was way cool looking, to boot.

That Spider Car is awesome. And how great was the Spider-Man figure in the first place. Mine still looks like he did the day I took him out of the box and I played with him all the time.