WITH THIS SUPERMAN CRUSADER RING, I'M A MEMBER OF SUPERMAN'S GANG

Great Scott! The other day, I felt like a 1940s kid when my Superman Crusader ring came in the mail from Hake's Americana and Collectibles! 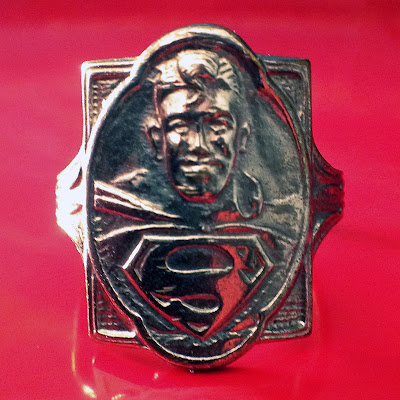 Way back in the fall of 1946, kids had to mail in a thin dime and one Kellogg's Pep cereal boxtop to get a Superman Crusader ring. In 2013, this big kid didn't need any boxtops, but instead just the winning bid in Hake's auction #208. The good folks over at Hake's made available a $100 shopping spree to two lucky members of the League of Extraordinary Bloggers. (Click here to visit my Hake's LOEB post with updates.) I was one of the lucky winners and used my Hake's credit to pick up this swell ring.

Instead of waiting for weeks and weeks like some poor kid had to do in 1946, my Superman ring dropped in my mailbox only a few business days after the auction. The original ring from Kellogg's was shipped to kids in a stiff envelope. (View the original mailer in a 2012 Hake's auction.) My ring was protected much better and was shipped safely in a heavy duty box. I've been aware of Hake's for a long time and have enjoyed their price guides, but this was the first time I've ever participated in one of their auctions. It was a breeze dealing with Hake's and their bidding system is smooth and easy. I had my eye on a lot of cool items that ended out of my reach, but it was still fun and exciting to watch. Plus the Superman ring fits in nicely with my small radio/comic character premium collection. 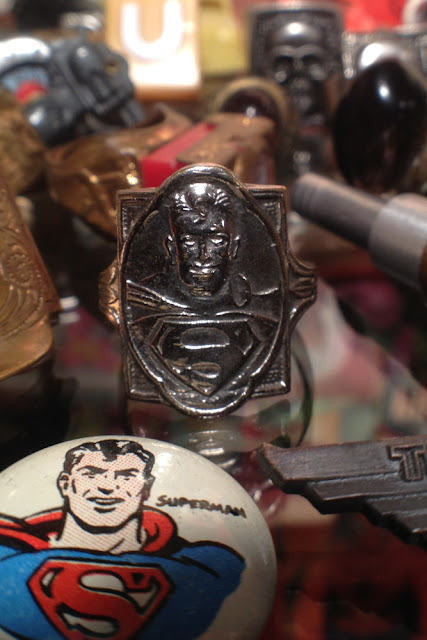 One last big thanks to Hake's Americana and Brian from Cool & Collected! Okay, I gotta run because Superman needs my help. Whew! Now that I'm a member of Superman's Crusader gang, I'm so busy fighting off no-gooders. Up up and away!

Okay, now this is cool. I won the other gift certificate from Hakes and I got myself a Shadow ring from the 90s movie. Very cool addition to your collection.

Kal - Looks like we had character rings on our mind. Congrats on picking up that very neat Shadow ring!